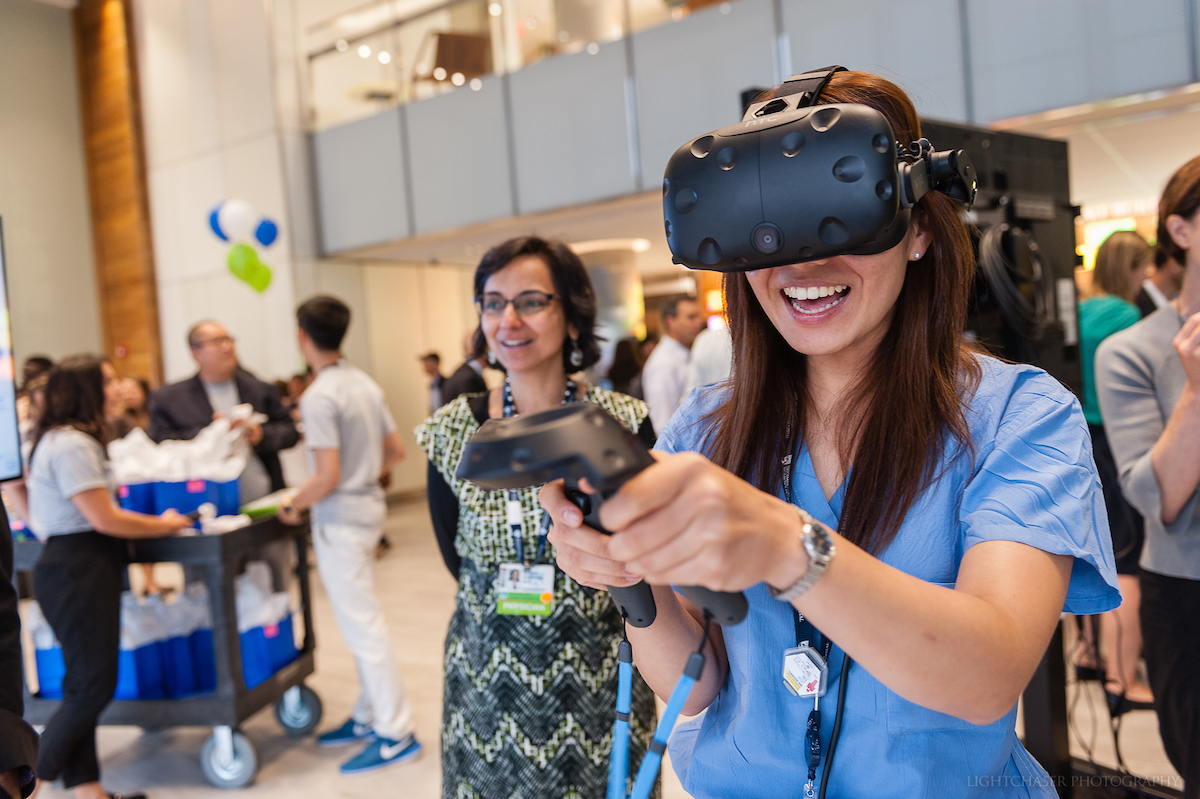 On Sept. 12, more than 200 clinicians, scientists, staff and entrepreneurs commemorated the fifth anniversary of the Brigham Digital Innovation Hub (iHub) during a celebration of innovation and digital advancement at BWH and beyond.

The half-day event, “iHub Turns 5,” featured panel discussions with BWH innovators, iHub alumni and senior leaders from the Brigham and Partners HealthCare in the Hale Building for Transformative Medicine.

Since 2013, iHub has helped innovators launch and advance projects focused on using technology to streamline hospital operations, improve care delivery and enhance the patient and employee experience. One example is the Brigham’s online wayfinding tool, which provides step-by-step directions for navigating the hospital. iHub members have also worked with Medumo, a startup co-founded by Internal Medicine and Dermatology resident Omar Badri, MD. The company’s flagship application – in use at the Brigham’s Endoscopy Center – delivers precisely timed reminders via email and text message to patients for various purposes, such as preparations for procedures.

“We are aspiring to drive the safest, most patient-centered and efficient care through the use, development, evaluation and commercialization of digital health solutions,” said Adam Landman, MD, chief information officer of Brigham Health.

During a panel highlighting current and former BWHers’ journeys from ideation to innovation, YiDing Yu, MD, shared her experience of working with iHub to grow a startup company from a single idea.

When she was a second-year Internal Medicine resident, Yu attended iHub’s inaugural hackathon five years ago wanting to solve a problem she had encountered firsthand, specifically the communication challenges care teams encounter when a patient is arriving via ambulance.

Due to privacy concerns, emergency medical service (EMS) responders can only transmit limited information about an incoming patient to hospital care teams over public radio channels. Yu wanted to develop a tool to bridge this gap – a technology that would provide emergency departments with timely information while protecting patient privacy.

Yu was determined to solve this problem, despite the fact that she had no experience starting a tech company. “All of us were first-time entrepreneurs. We had no idea what we were doing,” said Yu.

Yu’s application, Twiage, is now used by over 50 hospitals in 12 states. Its secure digital platform enables first responders and emergency departments to accelerate lifesaving care by sending real-time clinical data and location updates directly to hospital care teams. Yu said that while it was daunting to pivot her career path to focus on Twiage – she also practices medicine at Atrius Health a few hours a week – she believes in her startup.

Yu attributes part of her success to the support she has received from iHub and the larger Brigham community. “I came to the Brigham to train because of the culture here,” said Yu. “I think you have to be surrounded by people who support your passion – I have bosses and mentors who do that. They help ignite that fire in your belly.”

Yu was joined on the panel by Karen Fasciano, PsyD, a psychologist at BWH and Dana-Farber Cancer Institute, who discussed her work on banYAn, an app that helps young adults coping with cancer; Alexander Lin, PhD, director of the Center for Clinical Spectroscopy in the Department of Radiology, who launched a company called BrainSpec to make virtual biopsies a reality; and Scott Weiner, MD, MPH, of the Department of Emergency Medicine, who is working on several digital health projects related to the opioid crisis.

In addition to the speaking program, the celebration was a homecoming for many iHub alumni, including Lesley Solomon, MBA, who helped create iHub and was honored that evening with the inaugural Disrupting Medicine Award for her contributions and leadership.

Reflecting on iHub’s early days, Solomon said the Brigham had to chart new territory to get iHub off the ground: “You just have to go for it. You just have to start doing things.”