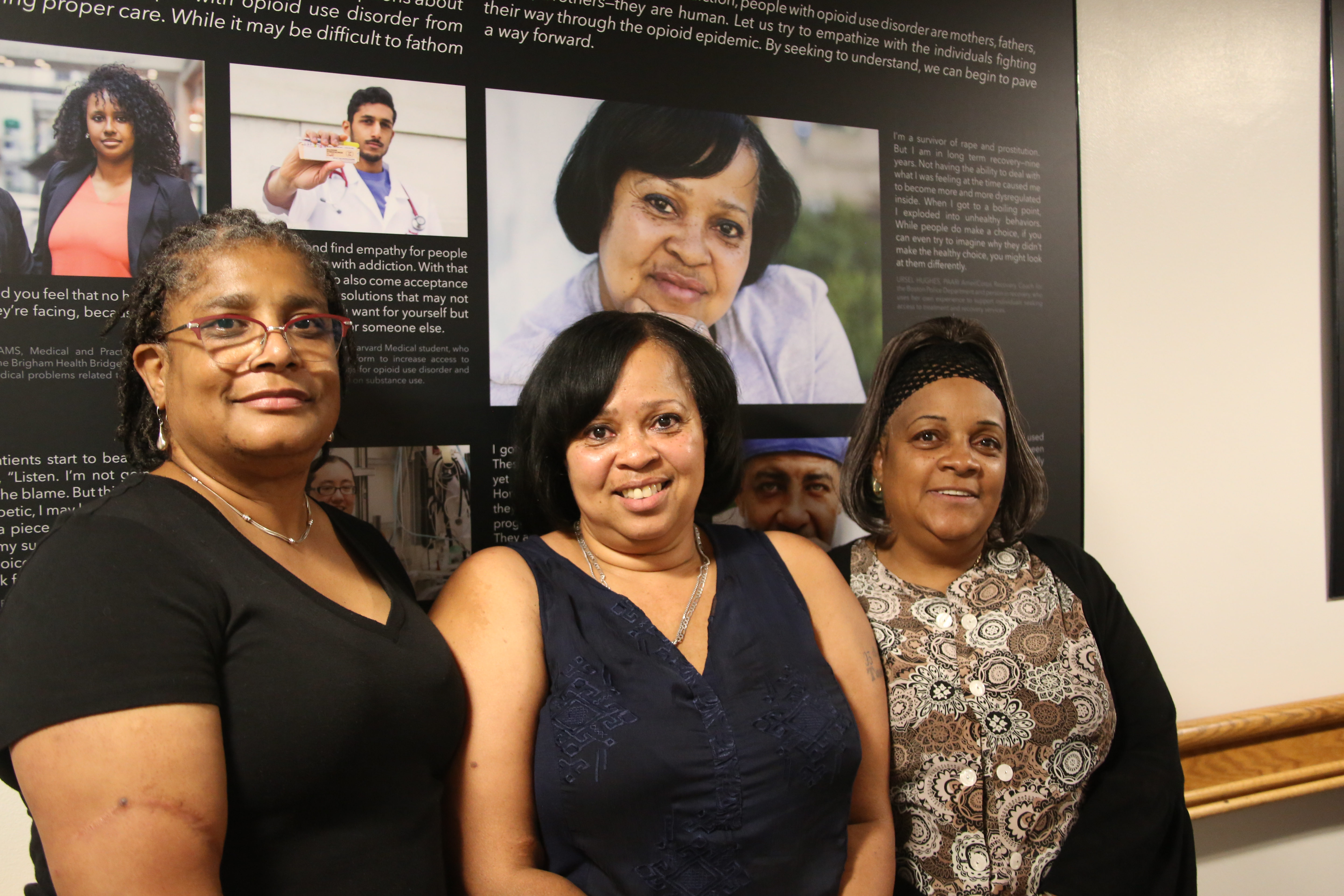 Ursel Hughes (center) poses with family members beside her portrait, featured in photo exhibit about the opioid crisis.

When Ursel Hughes took her first uncertain steps toward recovery nine years ago, she never imagined her story could one day inspire others. But as she recently reflected on her experiences overcoming substance use disorder, Hughes said she feels humbled and privileged to be where she is today.

One of several speakers featured at an event kicking off the Brigham’s celebration of National Recovery Month in September, Hughes underscored how important it was to be shown compassion and dignity in her greatest hour of need.

“What I give today is hope. I didn’t have any of that when I went into recovery,” she said. “I was grateful to find people who treated me like a human being.”

Held Sept. 5 on the Tower 2 mezzanine, the event brought together BWHers and Harvard Medical School (HMS) students to celebrate those in recovery and raise awareness about the services available across Brigham Health for those in need.

The event also marked the debut of “RESILIENT: Narratives of Hope from Boston’s Opioid Crisis,” a photojournalism exhibit by HMS students that features portraits of and quotes from health care professionals – including several BWHers – as well as advocates, educators, law enforcement officers, people in recovery and policymakers. The 35-foot installation will be on display in the second-floor corridor near the Amory (M) elevators until the end of October, at which point it will be moved to HMS.

Directed and curated by second-year HMS students Mimi Yen Li and Joyce Zhou, with guidance from fourth-year student Galina Gheihman, the exhibit aspires to empower, educate and engage viewers about advocacy, community and compassionate care in the context of the opioid epidemic.

“Stories of the opioid crisis are all around us,” Yen Li said. “Often these stories are bleak, but every now and then we catch a glimpse into what could be on the other side of addiction. RESILIENT is an effort to capture these narratives of hope.”

Hughes, whose photo is featured in the exhibit, is now a recovery coach with the Police-Assisted Addiction and Recovery Initiative, a Gloucester-based nonprofit partnering with police departments nationwide to provide non-arrest pathways to treatment and recovery. She urged attendees to extend the same respect and compassion she was once shown to other people with substance use disorder.

“There are many paths to recovery, but if we don’t treat a person like a human being, they’re never going to find one,” she said. “I challenge you to support others, whether they are sick and suffering coming off the street or whether they are uneducated around the disease model of thinking about addiction.”

A Supportive Environment for Recovery

Attendees were also invited to join a statewide campaign, State Without StigMA, and pledge their commitment to reducing the stigma around addiction by being compassionate and thoughtful in how they think, talk about and treat people with substance use disorder.

Scott Weiner, MD, MPH, an emergency physician and director of the Brigham Comprehensive Opioid Response and Education (B-CORE) Program, said clinicians can play a significant role in reinforcing the fact that addiction is a chronic medical condition, not a choice or moral failing, by avoiding stigmatizing language in conversation with patients, families and colleagues. Stigma often prevents patients from seeking treatment and receiving high-quality care, he noted.

“The words we use matter,” Weiner said, citing examples such as identifying a patient as a person with substance use disorder, not an addict, or describing toxicology test results as positive or negative, rather than clean or dirty.

Additionally, the event highlighted some of the recent strides the Brigham has made in its response to the opioid crisis, including the launch of the Brigham Health Bridge to Recovery – also known as the Bridge Clinic – earlier this year. The clinic provides timely access to pharmacotherapy, counseling, case management and peer support until access to a long-term recovery program can be secured.

One of the biggest goals of the Bridge Clinic was to promote a “no-wrong-door” approach to care, said Joji Suzuki, MD, director of BWH’s Division of Addiction Psychiatry. That’s because, until recently, health care organizations around the country often turned away patients with substance use disorder, simply saying they did not treat the condition there, he explained.

“We would never allow that for any other fatal or severe illness, yet that’s been done for substance use disorders for a very long time,” Suzuki said. “I am so proud to be at the Brigham and Harvard because when a patient calls, we can confidently say, ‘You’ve come to the right place.’”