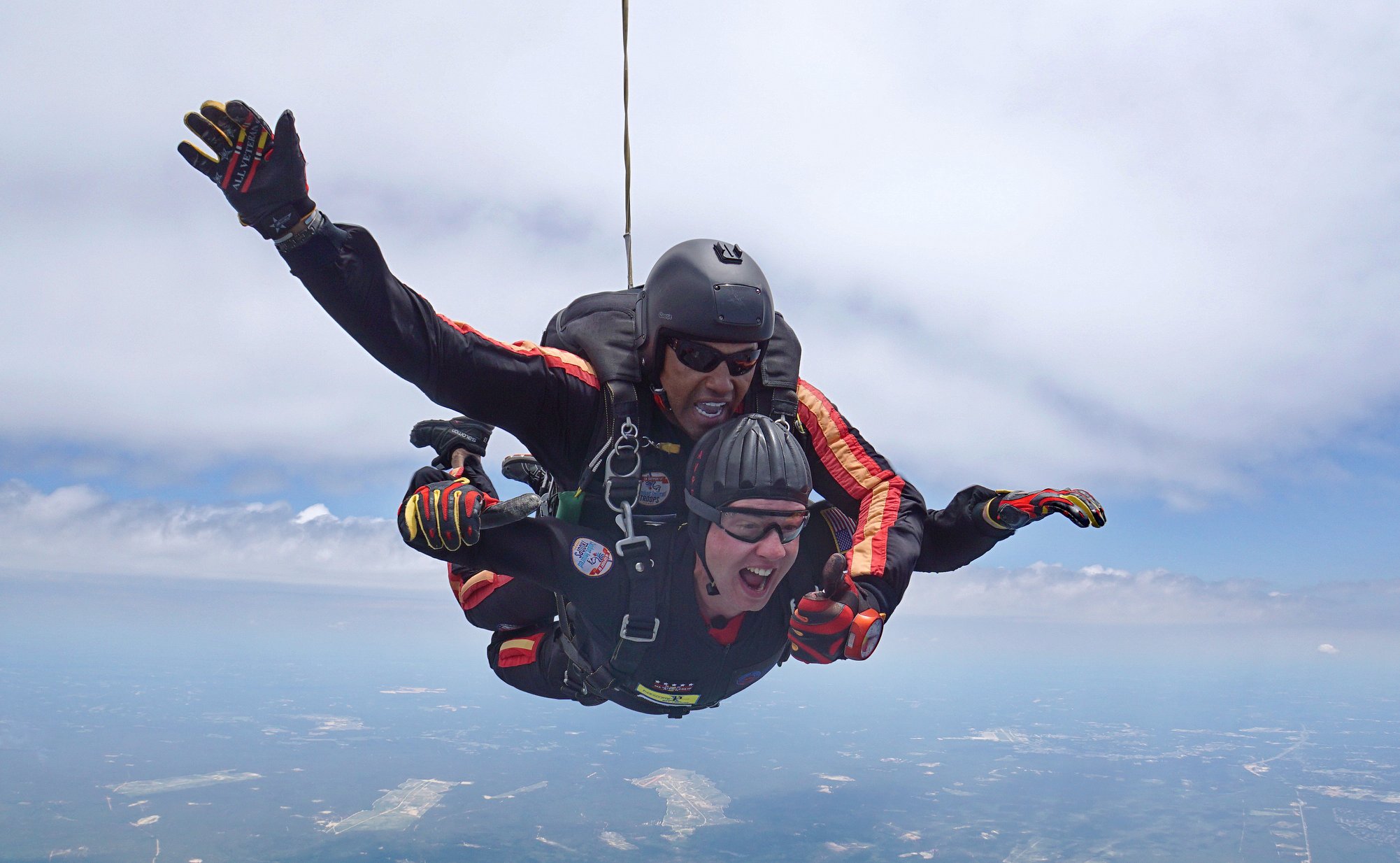 When Matthew Pierce learned he had an aggressive form of cancer at age 19, he was crushed knowing that the diagnosis meant his lifelong dream of pursuing a career with the U.S. Marine Corps was over. A patient at BWH, he shared this with members of his care team, who became inspired to help Pierce heal in more ways than one.

On June 6, the now 22-year-old had his wish come true for a day by skydiving in tandem with the All Veteran Group, which consists of active and retired members of the U.S. Army’s Parachute Team, also known as the Golden Knights, based at Fort Bragg in North Carolina. Giving new meaning to the phrase “going the extra mile,” neurosurgeon Ian Dunn, MD, of the Department of Neurosurgery, joined Pierce and Pierce’s girlfriend, Emily Johnston, on the parachute jump out of an airplane at 15,000 feet. Another member of Pierce’s care team, Edward J. (E.J.) Caterson, MD, PhD, of the Division of Plastic Surgery, who helped organize the jump, was also there to cheer for them on the ground.

Dunn, who had never gone skydiving prior to this, said participating in the parachute jump with one of his patients was unforgettable and meant a lot to him personally and as a care provider.

“As surgeons, we want to restore patients’ lives and see them thrive post-surgery,” Dunn said. “It has been phenomenal getting to know Matt. He’s a very special young man, and I am honored that I could be there with him for this once-in-a-lifetime experience.”

Several years ago, Caterson contacted the Golden Knights and arranged a jump with them and one of the Brigham’s face transplant patients. To this day, Caterson remembers the awe-inspiring experience and said he felt privileged to help facilitate it for another patient. 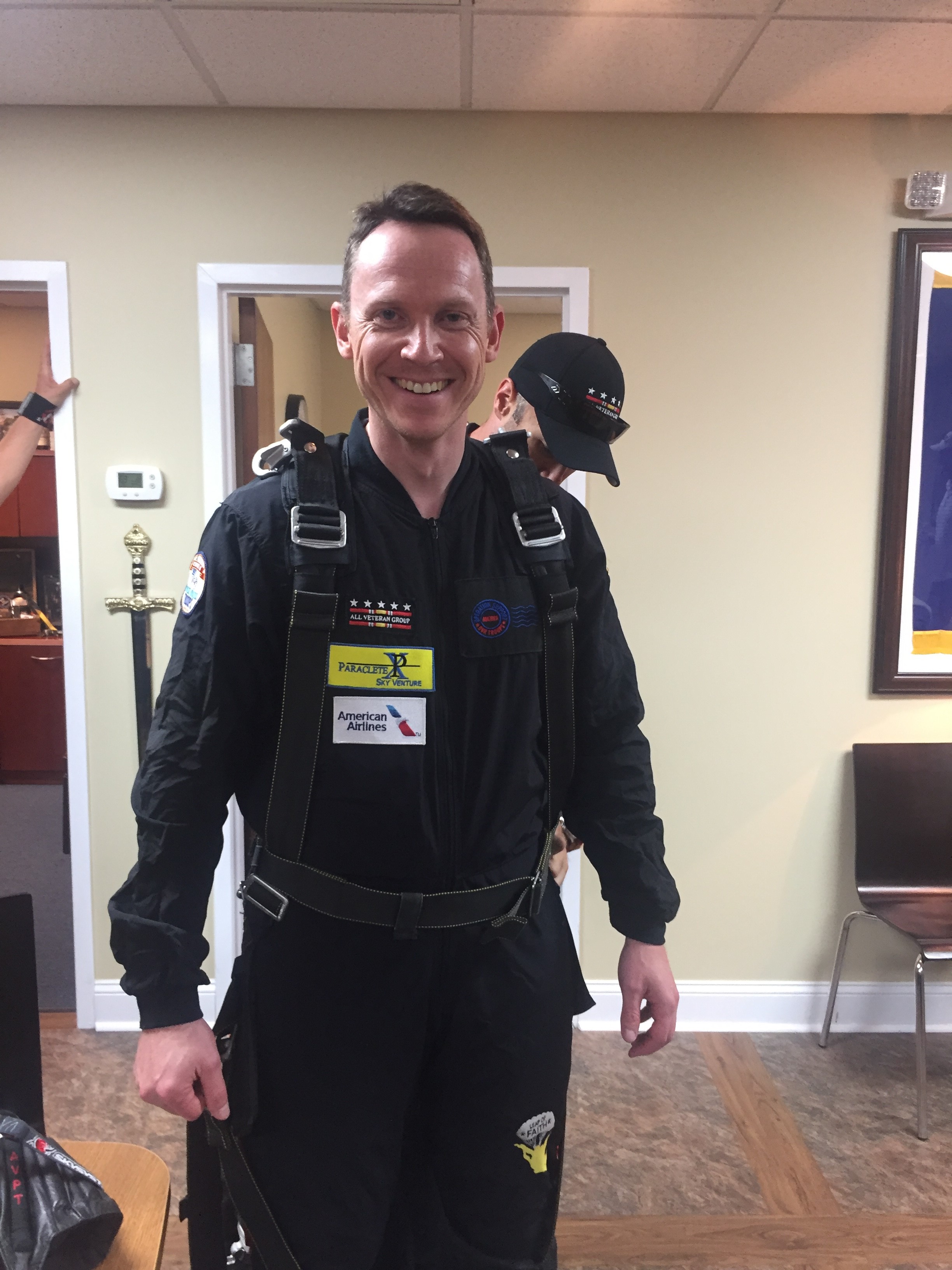 Ian Dunn suits up for skydiving. Photo courtesy of All Veteran Group.

“Matt is an incredible human being who hasn’t let his obstacles define him,” Caterson said. “Instead, he has overcome adversity in his life with such grace. It was our pleasure to find a way to honor Matt for his bravery and courage. At the Brigham, many of us are quite fortunate to play roles in many multidisciplinary teams of diverse expertise – all working together for the betterment of our patients.”

In 2015, Pierce was diagnosed with Ewing’s sarcoma, a rare form of cancer affecting mostly children and teenagers that forms in the bones or in the tissue around bones. It is often treated with a combination of chemotherapy, radiation and surgery. Pierce’s grapefruit-sized tumor was situated at the base of his skull, a location Caterson noted is extremely rare, and needed to be removed.

Pierce was cared for by a multidisciplinary team at the Brigham and Dana-Farber Cancer Institute. He underwent 14 rounds of chemotherapy, 28 radiation treatments and surgery in 2016 to remove part of his skull and reconstruct the area where the tumor was growing. The 10-hour surgery involved three surgical disciplines working together: Neurosurgery, Plastic Surgery and Surgical Oncology.

Pierce has been in remission for almost two years. He’s currently a student at Norwich University in Vermont and hopes to one day become a federal law enforcement officer. Pierce thanked his care team at the Brigham – including Dunn, Caterson and Chandrajit Raut, MD, MSc, of the Division of Surgical Oncology – for believing in him and giving him a second chance at life.

“Without them, I would not be here today,” Pierce said.

Raut said he is moved by Pierce’s resilience: “Seeing Matt move forward with his life and live his dream motivates us as health care providers to do what we do each day.”

One Response to “Brigham Surgeons Arrange Skydiving Experience for Patient”