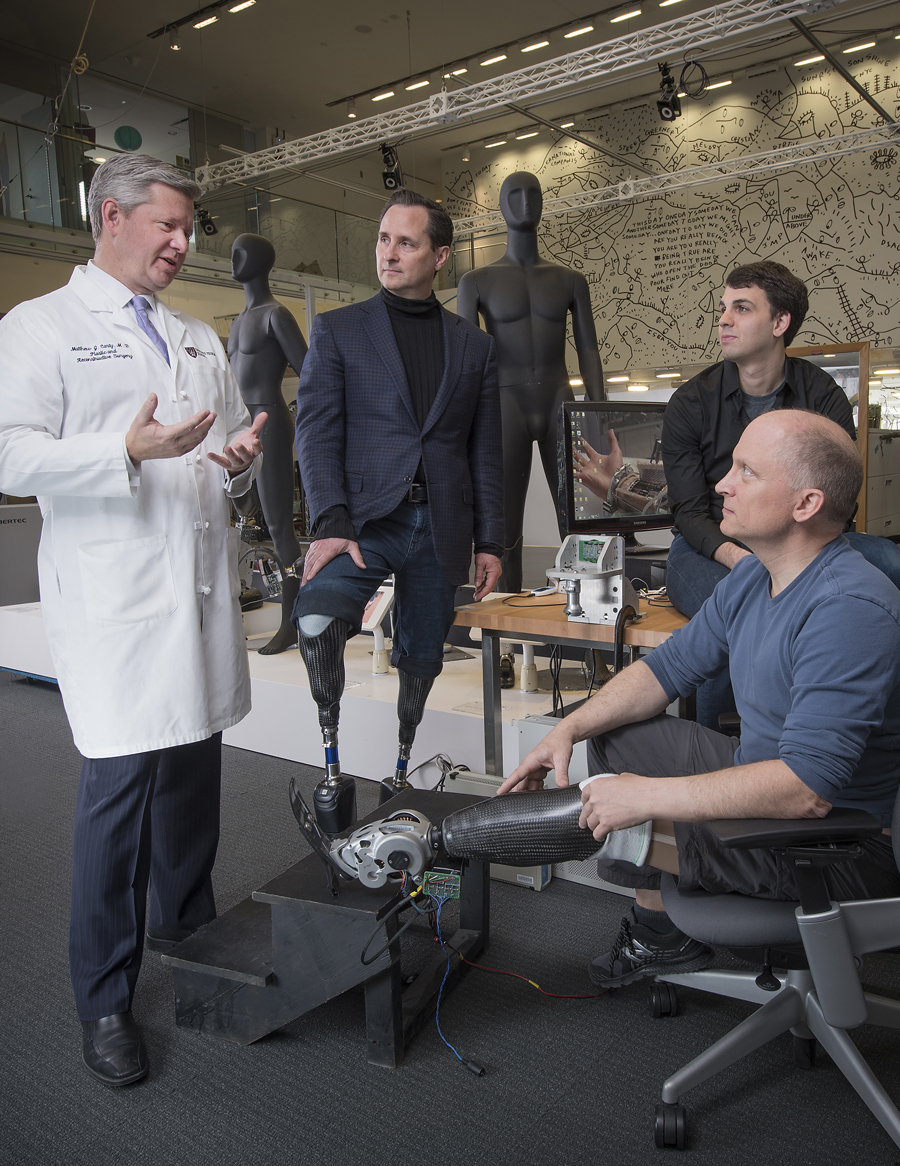 In July 2016, Jim Ewing became the first person to undergo a fundamentally new kind of amputation procedure, as designed by a clinical team led by Matthew Carty, MD, of the Division of Plastic and Reconstructive Surgery, in collaboration with Hugh Herr, PhD, and his team from the Biomechatronics research group at the MIT Media Lab Center for Extreme Bionics. A paper published recently in Science Translational Medicine details the outcomes of the procedure and describes how Ewing benefitted from the innovation.

In its uninjured state, the human body is a dynamic machine comprising many moving parts that function in balance and enable us to perform complex movements — such as running and dancing — through the coordinated interaction of our brains and our muscles.

Traditional amputations disrupt this dynamic state. Lower limb amputees lose the ability to finely control the muscles in their residual leg and, more importantly, the ability to perceive where their limb is in space without looking at it. Without this intercommunication, actions such as walking on uneven ground or balancing on one leg become impossible. These limitations have, in the past, made it difficult for surgery to restore proprioception — the sense of the position, speed and rotation of a limb — in lower limb amputees.

“We are excited to see the results of this work in Jim’s ability to interface with the prosthetic to restore proprioception and perform complex movements, which are far beyond what we typically witness in patients with standard amputations,” said Carty, director of the Lower Extremity Transplant Program. “His progress is enabling us to transform limb salvage and leverage all that is technically possible to restore function.”

In the new publication, Carty and colleagues describe a method to restore proprioception after amputation, known as the agonistantagonist myoneural interface (AMI). Invented by researchers at the Center for Extreme Bionics at the MIT Media Lab, this method can send movement commands from the central nervous system to a robotic prosthesis. It also relays feedback describing movement of the joint back to the central nervous system.

The AMI involves a novel surgical approach in which muscle relationships are preserved within the amputated limb. Made up of two tendons that are surgically connected to allow one muscle to contract while the other stretches, the AMI allows an amputee to sense a prosthetic limb’s speed, location and more, based on feedback from a bionic joint.

The AMI was validated in extensive preclinical experimentation at MIT, prior to its first surgical implementation in a human patient at BWFH.

The MIT and BWH team evaluated Ewing’s ability to control and manipulate his prosthesis in free space, comparing responses for Ewing with those of patients who had received a traditional amputation.

The team found that Ewing performed better on a variety of tasks that required controlling the prosthesis, as compared to four subjects who underwent a traditional amputation. For instance, when climbing and descending stairs, Ewing could flex his prosthetic foot and place it on each step in a manner that he described as “automatic” while his counterparts could not.

Based on their findings, the research team hypothesizes that the AMI provides feedback to the patient that allows them to correct and adjust limb position, speed and rotation. Each time Ewing sought to move his phantom limb, he received confirmation of correct muscle activation as stretch receptors within the AMI muscles sent signals to his brain.

The current study has its roots in a research project that received initial funding in 2014, when Carty was selected as the winner of the inaugural Stepping Strong Innovator Awards granted by The Gillian Reny Stepping Strong Center for Trauma Innovation.