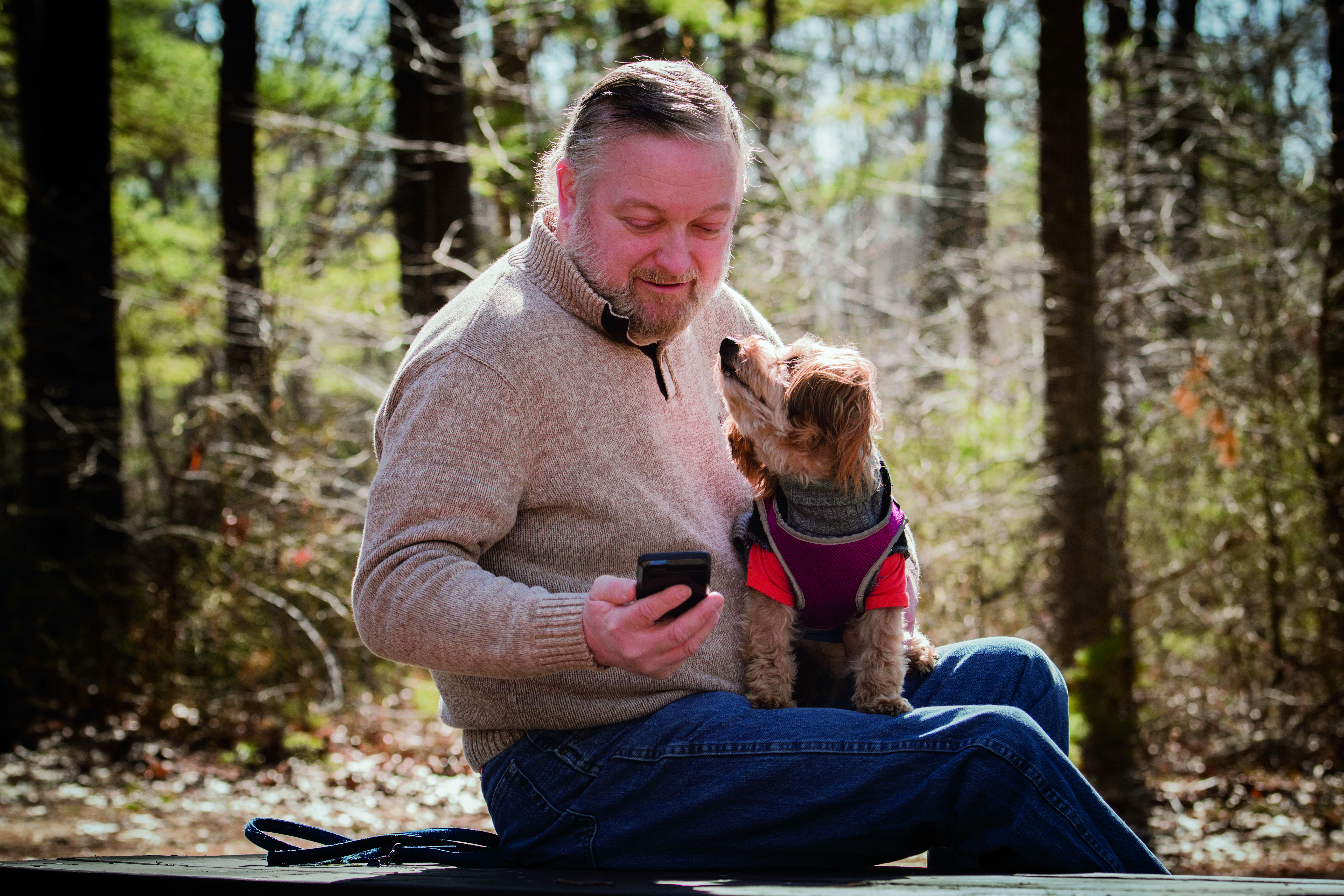 Jonathan Potter uses Cogito Companion while taking his dog, Beau, for a walk.

This following is an excerpt from the article “Pocket Docs” in the summer issue of Brigham Health magazine. View the complete issue here.

As digital tools simplify everyday tasks and transactions, patients and providers alike are looking to mobile apps to augment care at home and on the go. At the forefront of this work, BWH innovators are building, testing and deploying evidence-based, user-friendly technologies to improve patients’ lives.

BWH patient Jonathan Potter was initially skeptical of digital health apps and their claims to transform people’s wellness. However, after he was diagnosed with post-traumatic stress disorder (PTSD), he was willing to try almost anything to feel better.

Thanks to a novel collaboration between BWH researchers and a mobile app developer, Potter is one of several patients benefitting from the use of a smartphone app called Cogito Companion, which can assess a person’s mood and emotional well-being based on their voice and physical activity.

Cogito Companion has unconventional origins for a health app: It was originally developed for the customer service industry, using machine-learning algorithms and advanced voice analysis to help agents gauge callers’ attitudes in real time and suggest techniques to improve customer satisfaction. Like an ultra-precise mood detector, the program is so attuned to unconscious, nonverbal signals like tempo, emphasis and mimicry, the software’s developers can’t successfully mimic an upset-sounding voice and fool the system into sensing true distress.

Several years ago, researchers at BWH wondered if Cogito’s emotional intelligence could help people living with depression or other conditions.

Led by David Ahern, PhD, director of the Behavioral Informatics and eHealth program in the Department of Psychiatry, the team worked with developers at Cogito to pair the software with smartphone sensors. As patients speak into their phones or move throughout the day, the app analyzes patterns in their speech and activity to track their emotional well-being. The data give clinicians a chance to respond sooner to warning signs and have richer conversations with patients.

An early user of the app, Potter first learned about Cogito Companion while attending a support group for patients with PTSD at Brigham and Women’s Advanced Primary Care Associates, South Huntington. On his daily walks with his dog, Beau, Potter recorded his thoughts in the app. Hoping to receive a positive report, he initially tried his best to sound upbeat. After one recording, he was stunned when Companion sent him an alert that he sounded down.

“I knew how Companion was supposed to work, but I didn’t believe it actually worked until I saw the way it was interpreting my messages,” Potter said. “It was listening to how I expressed my thoughts, not the actual words I was saying. It was like talking to a friend who really cared about how I was doing – someone who would call me on saying I’m fine when I’m obviously not.”

The Future of Care

“Having sophisticated, built-in sensors in our pockets creates opportunities for observing and understanding how we live that didn’t exist 10 years ago,” Ahern said. “What providers do with that information could be an even bigger change. That will require us to move toward a population health strategy – not just filling out surveys at appointments and waiting to see how patients are doing, but actually following them in real time and knowing when their care needs to escalate.”

The best of what’s to come with digital health may be its power to extend the reach of health care, as actions and conversations that used to occur only in an exam room can now happen anywhere. Integrating wearables and devices into routine care will take time, however, since they don’t fit traditional health care delivery models.

“Wearables and apps fit health care models of the future: population health, precision medicine and personalized care,” Ahern said. “Systems will need to evolve to enable care delivery with these devices without compromising privacy – and we’re seeing that evolution now.”

For Potter, having a tool that can identify concerning behavior with such objectivity and clarity could be especially helpful for patients who are struggling.

“I’m lucky to have people in my life who care about me and how I’m doing, but others might not, or they might not want to talk openly about their mental health,” he said. “In that way, this app could really help people feel less alone and get the help they need.”