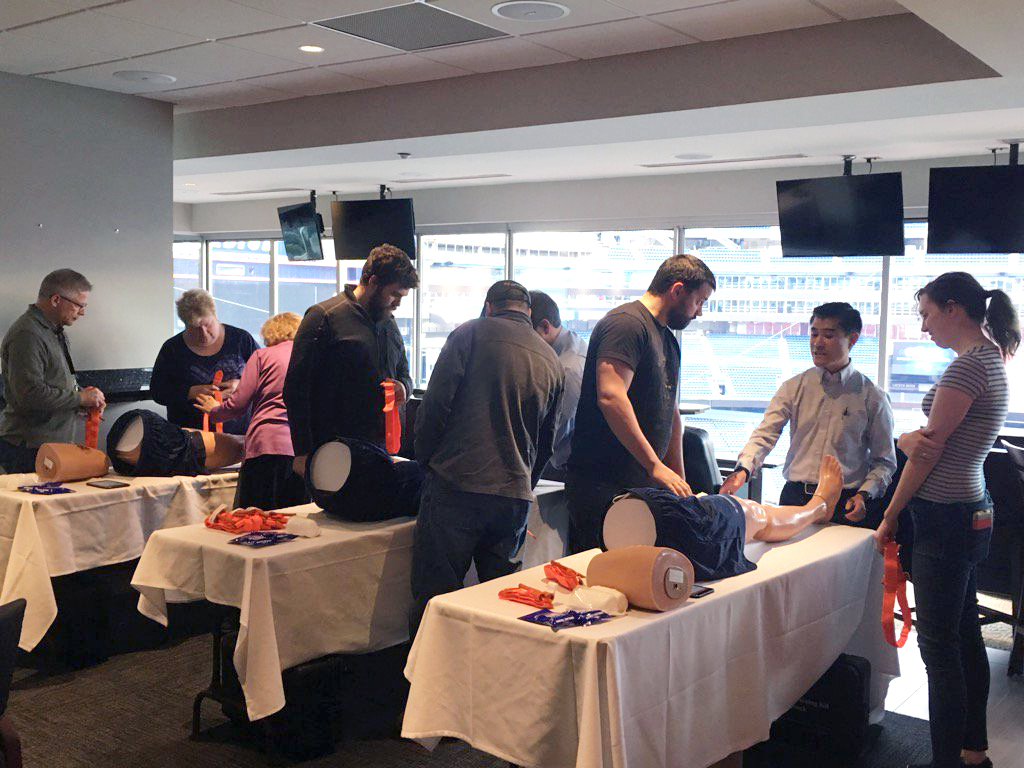 This tourniquet training class for staff at Gillette Stadium was one of many conducted by BWH researchers last year.

In the immediate aftermath of an accident or attack, can bystanders help save the life of someone who has experienced a traumatic injury? Brigham researchers recently sought to answer this question by studying how well different training methods prepared laypeople to apply tourniquets to stop uncontrolled bleeding, finding that those who underwent in-person training were most likely to successfully perform and retain this skill.

Traumatic injuries are the leading cause of death for Americans under 46, and uncontrolled bleeding is the most common cause of preventable death following a traumatic injury. Since the Boston Marathon bombings in 2013, several national initiatives, including the White House’s “Stop the Bleed” program, have emerged to empower laypeople to act as immediate responders until emergency personnel arrive on scene. These efforts have led to the development of different training methods, but it was previously unknown which type, frequency and format of training would competently prepare nonmedical personnel to conduct hemorrhage control.

To determine the best training method for tourniquet education, BWH researchers completed the PATTS Trial (Public Access and Tourniquet Training Study). The study was funded by The Gillian Reny Stepping Strong Center for Trauma Innovation and conducted in partnership with Gillette Stadium and the New England Patriots.

In total, 465 Gillette employees, who had no prior training in this area, participated in the study. The trial was designed to not only train staff in responding to uncontrolled bleeding, but also to test whether, and under what conditions, such training was effective. The results were published in JAMA Surgery this month.

Participants were randomly assigned to one of four groups. The first was provided instructional flashcards to learn about proper tourniquet application. The second group used flashcards and audio kits. The third received in-person training through the Bleeding Control Basic (B-Con) course, led by BWH instructors. The final cohort was asked to apply tourniquets with no training or instructions. Participants in the first, second and fourth groups later received in-person training.

Looking at skill retention, researchers discovered that only about half of the participants could correctly apply a tourniquet three to nine months later, emphasizing the need for refresher training.

“Before the PATTS Trial, we didn’t know what was the best way to train the public in bleeding control,” said Adil Haider, MD, MPH, a trauma surgeon and Kessler director of the Center for Surgery and Public Health. “Now that we know, we can be more effective in creating training programs, public awareness campaigns and tools to empower people.”

Researchers stress that most external hemorrhages, or bleeds, can and should be controlled by direct pressure. While bystanders were critical first responders following the Boston Marathon bombings, subsequent research indicated that all 27 improvised tourniquets administered at the scene were applied incorrectly.

Looking ahead, Eric Goralnick, MD, MS, medical director of Emergency Preparedness and lead author of this study, said clinicians and public health investigators will convene to define a common research agenda for laypeople and bleeding control.

Meghan McDonald, MSN, RN, nurse director of the Trauma Program in the Division of Trauma, Burn and Surgical Critical Care and co-author of the study, said intervention from bystanders in any situation, not just mass-casualty events, can help save lives.

“Some people hesitate, especially when it comes to tourniquets, because they are afraid of causing more harm,” McDonald said. “Educating laypeople on hemorrhage control, be it direct pressure or tourniquet application, is not only the responsible thing to do as a trauma center – it is also the right thing to do.”