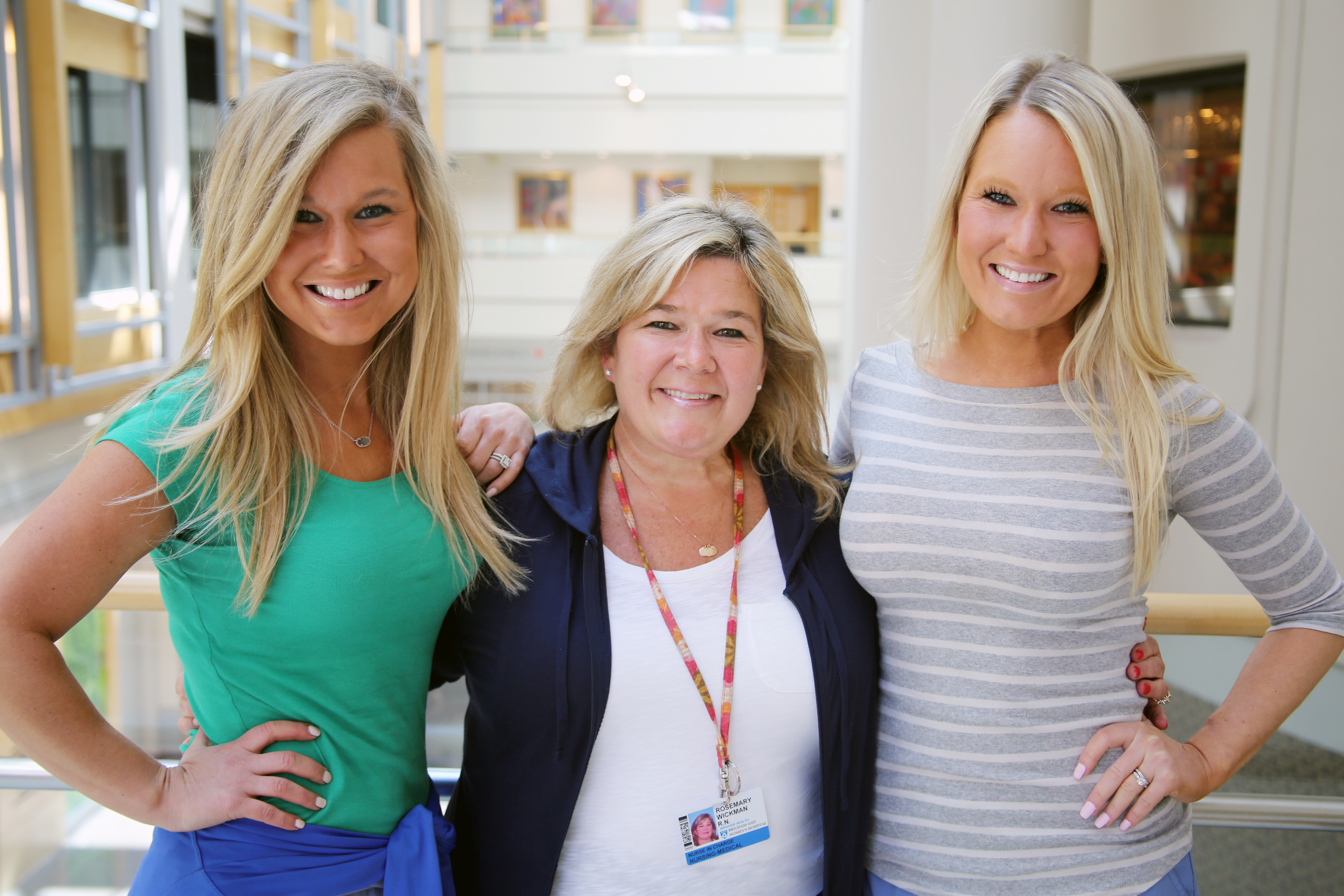 While “the Brigham family” typically refers to the close-knit community at BWH, the phrase takes on a more literal meaning for some staff. In honor of Mother’s Day, BWH Bulletin highlights a few Brigham moms whose children followed in their footsteps to work here.

Meet the ‘Brigham and Wickmans’ Family

There are dozens of reasons why Rosemary Wickman, RN, loves working at the Brigham, but one in particular stands out: being able to work with her daughters and fellow BWH nurses, Kristina Wickman, MSN, RN, and Katie Wickman, RN.

“It’s an absolute dream come true that I’m able to work with my daughters at the Brigham,” said Rosemary, a nurse in charge on Tower 14B. “I’m a very lucky mom.”

While each of the Wickmans works in a different unit, they all enjoy feeling connected through their family’s shared dedication to caring for patients and families. Living only a couple of miles from each other, they almost always commute together, and several times a week they have dinner together.

“We are the best of friends,” said Kristina, a nurse on Tower 6B. “Both Katie and I have learned so much from our mom about nursing.”

Kristina and Katie have fond memories of when their dad, Chuck, would bring them to the Brigham to visit their mom when they were younger: “We’d come in wearing our pajamas,” said Katie, a nurse in charge on Tower 14CD. “We were always so excited to see our mom at work.”

Rosemary said many of her colleagues remember meeting Kristina and Katie, who were born one year apart, when they were little girls. They said many people at the Brigham call them “Team Brigham and Wickmans,” a play on “Brigham and Women’s.”

“We all love the Brigham and can’t imagine working anywhere else,” Kristina said. “We are one happy Brigham family.”

During Mother’s Day weekend, Rosemary enjoyed spending time with her family. They visited a winery on Cape Cod and had dinner together: “It was perfect,” Rosemary said.

To say Julie Santiago and her son, Jonathan Santiago, grew up at the Brigham is no understatement.

Celebrating 30 years of service this year, Julie began working at BWH when she was in high school, landing a part-time job as a dispatcher for Central Transport. Now a senior practice assistant in the Phyllis Jen Center for Primary Care, Julie says the Brigham has always been a big part of their lives – particularly for Jonathan, who was born here. 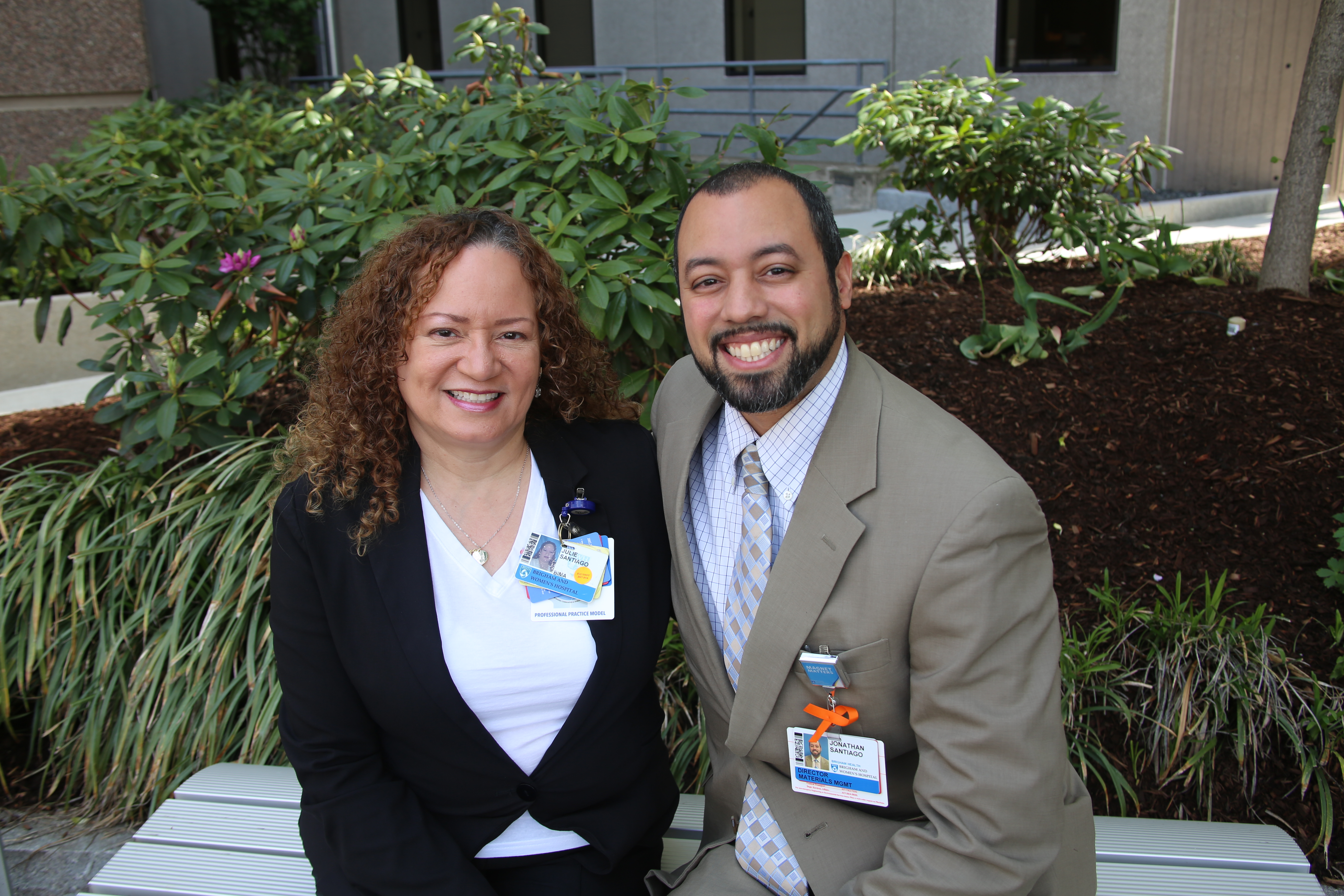 “When Jonathan was offered his current job, he said to me, ‘I’m coming back home, Mom,’ because he calls the Brigham home,” said Julie, who celebrated Mother’s Day with Jonathan, his wife and their three children.

Julie and Jonathan said they feel incredibly lucky to have the opportunity to see each other so frequently at work, especially because they now live an hour apart, and try to have lunch together every day.

Of the many things Jonathan admires about his mother, one trait stands out above all: her unwavering dedication to her patients at the Jen Center.

“My mom had me at a young age, and I have always admired how much she has accomplished in her career,” Jonathan said. “But it was really moving when I had the chance to see her importance and involvement in patient care – and how much her patients value everything she does.”

Appreciation for ‘Little Acts of Kindness’

“She’s wonderful, smart and supportive,” said Eddie, an admitting officer in Patient Access Services. “I enjoy working with her and learning from her every day.” 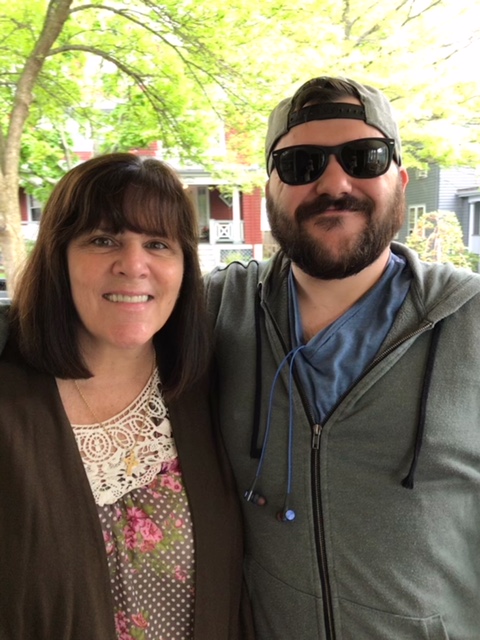 Janet – associate chief nursing officer for the Emergency Department, Float Pool and nursing administrators – said it’s fun commuting to work with her son and seeing him at the Brigham throughout the day. Sometimes, Eddie will surprise his mom with a cup of coffee: “Those little acts of kindness mean a lot to me,” Janet said.

Janet said many people at the Brigham don’t know that her son also works here. She added it’s fun when colleagues realize they are mother and son.

On Mother’s Day, Eddie showed his appreciation for his mother with flowers, which Janet planted in her garden at home.

With a career at BWH spanning nearly 18 years, Vivianne Ashfield, a practice assistant at Occupational Health Services’ mid-campus clinic, has many happy memories in her time at the Brigham. Now, she looks forward to creating a new collection of special moments here with her daughter, Nathalie Ashfield, who became an executive staff assistant at BWH two months ago. 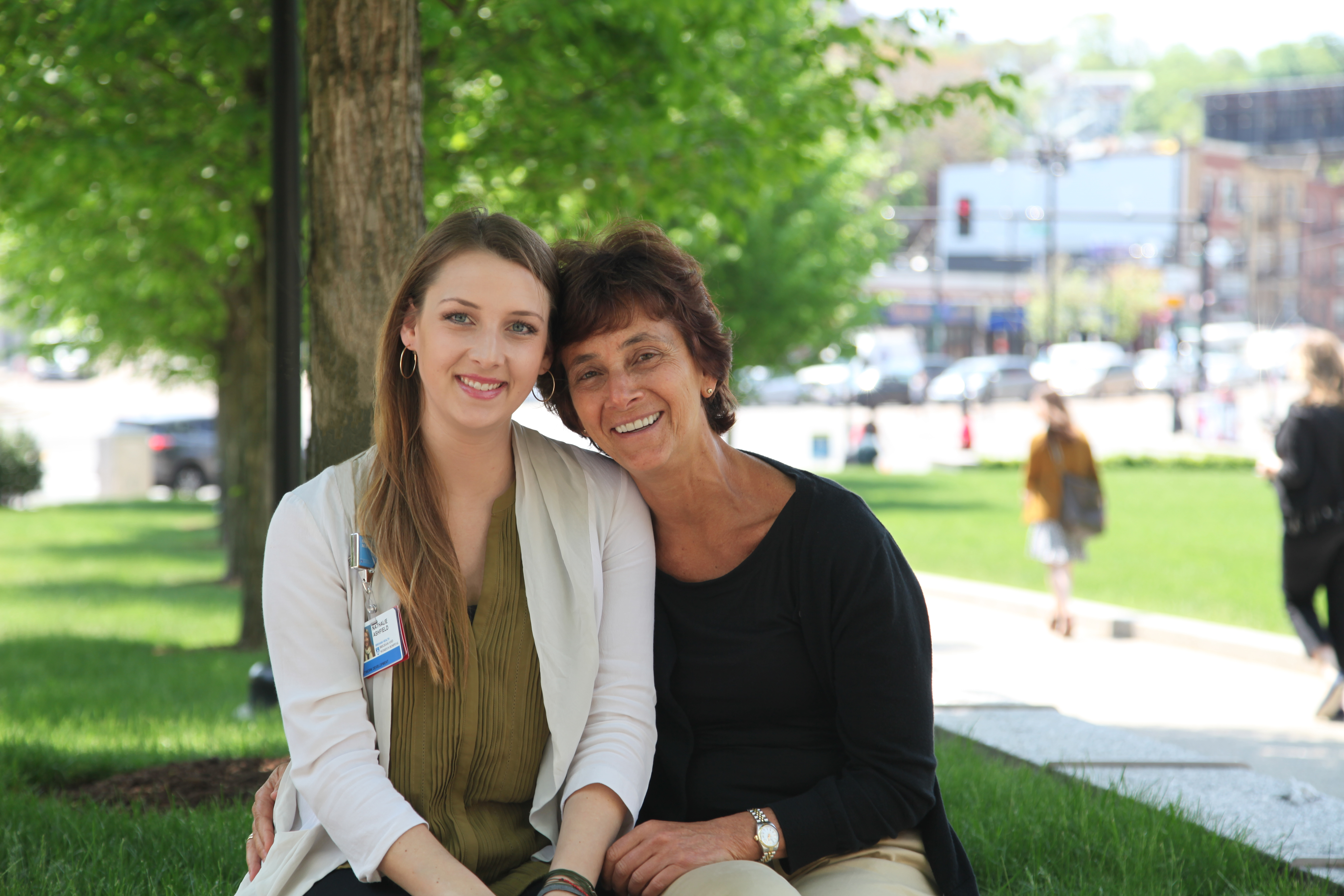 Although they don’t work together directly, Vivianne and Nathalie said they enjoy having the opportunity to meet for lunch or coffee several times a week.

“When life gets busy, it can be hard to get together. It’s been really nice being so close to her now and seeing each other a lot more,” said Nathalie, who celebrated Mother’s Day with her mother and grandmother at a Boston restaurant.

Nathalie, who previously worked at BWFH as a senior administrative assistant, said she looks up to her mother in many ways, especially in terms of her career. “She’s always been a very strong, independent woman, and her work ethic is really something that I admire,” she said.

The feeling is mutual. “I’m very proud of Nathalie – she has already accomplished a lot,” Vivianne said. “She’s really amazing.”

“I had a great role model,” Nathalie chimed in.

‘We Know We Have Each Other’

Stephanie Peña and her mother, Virtudes Carrasco, both feel a sense of comfort knowing they work right down the hall from each other at the Brigham. 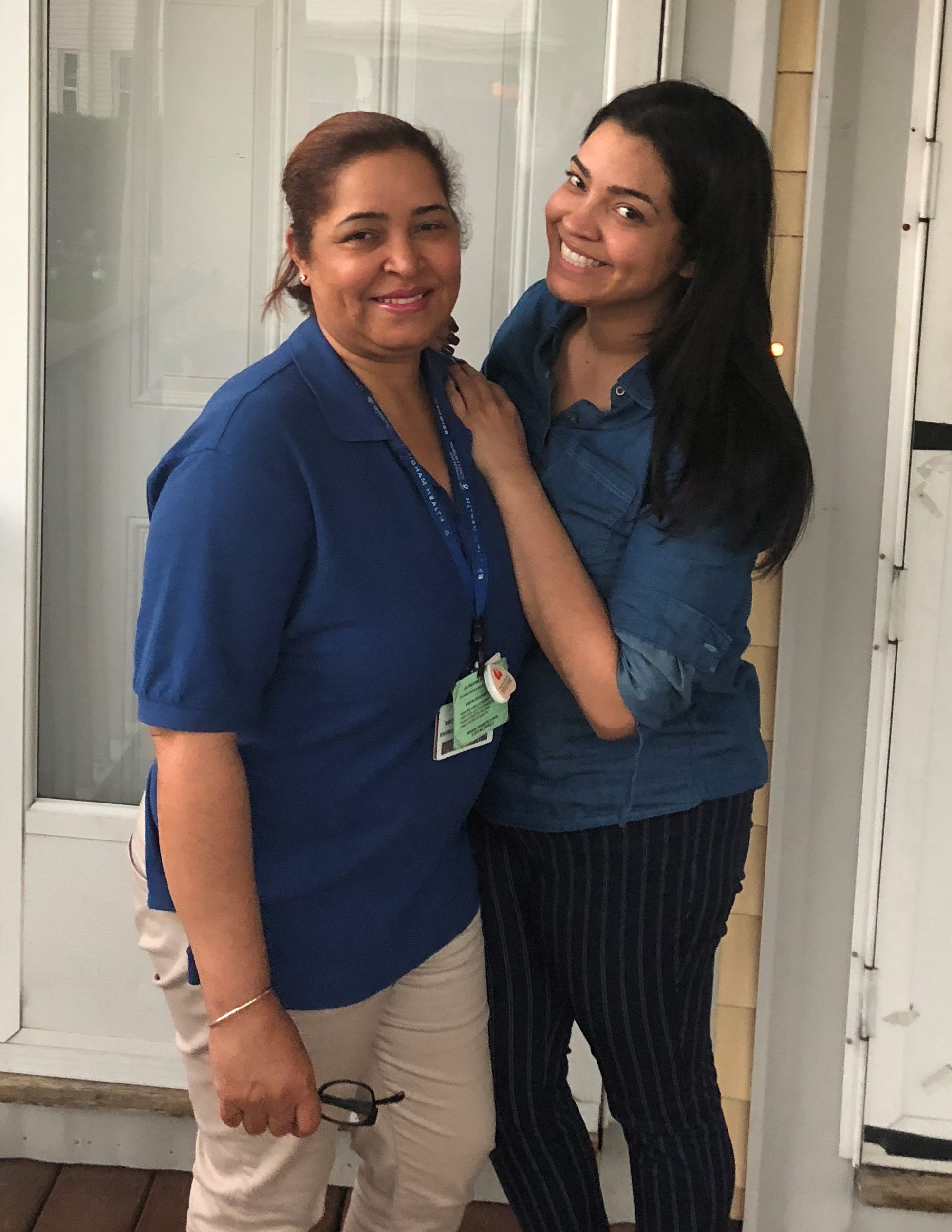 Peña, a service coordinator in the Bretholtz Center for Patients and Families, said she cherishes the fact that her mom, who works in Central Transport, stops by Peña’s office before the start of each shift to say hello.

“That always brightens up my day,” said Peña, who has worked at BWH for almost 10 years.

Their Brigham bond has also brought them closer, Peña added: “We’ve become best friends. We know we have each other very close by if an emergency happened.”

Carrasco, who has worked at BWH for 17 years, looks forward to seeing her daughter at work throughout the day.

“I know that she is OK, and even if I don’t see her at home, I know the next day I will see her at the Brigham bright and early,” Carrasco said.

One Response to “Celebrating Mother’s Day: Following in Mom’s Footsteps at BWH”