Can a baby be stressed? While a baby doesn’t have responsibilities to worry about, the environment of a newborn – particularly an infant born preterm – can be full of stressors, including medical procedures and long-term separation from parents. Simple interventions, such as parent contact, music and breastmilk, are thought to ease stress levels, but how do you measure a newborn’s anxiety? 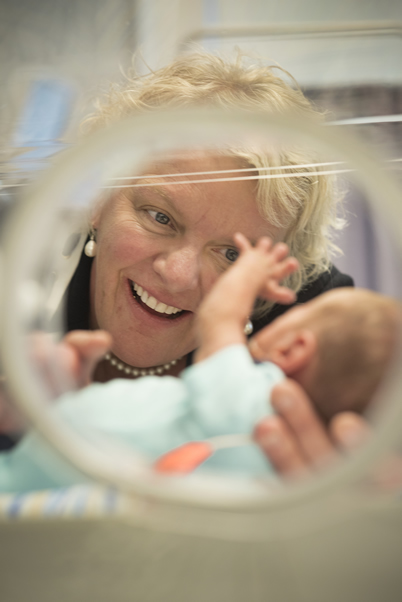 Terrie Inder visits with a young patient in the NICU.

Stress in the womb and in a baby’s environment is one of many aspects of newborn health that may affect health in adulthood. Adverse experiences early in development are thought to have a profound influence on one’s risk for chronic diseases later in life, but relatively little research has quantified these risk factors and their repercussions.

Researchers from the Department of Pediatric Newborn Medicine, led by its chair, Terrie Inder, MBChB, are hoping better understand how the first nine months can shape someone’s health for the rest of their life through the Healthy Start to Life project, supported by the Brigham Research Institute (BRI) Director’s Transformative Award. The $250,000 award funds groundbreaking, interdepartmental and interdisciplinary projects that will accelerate discoveries to improve human health.

Inder and her Pediatric Newborn Medicine colleagues, including Lianne Woodward, PhD, Mandy Brown Belfort, MD, and Katherine Gregory, PhD, RN, plan to develop the LifeCodes cohort to include new neonatal and childhood data and an expanded population of high-risk infants.

A Growing Resource for Newborn Research

The LifeCodes cohort, established by Thomas McElrath, MD, PhD, and David Cantonwine, PhD, of the Department of Obstetrics and Gynecology, is one of the nation’s largest pregnancy cohort studies. More than 5,000 are women enrolled, and the cohort grows at a rate of eight new women per week.

An extensive bank of biospecimens, including blood, urine and placenta samples, has been collected from study participants at 10 weeks, 26 weeks, and 35 weeks of pregnancy and at delivery.

To date, there has been limited neonatal and childhood data collected on the babies born to women enrolled in LifeCodes. Through the Healthy Start to Life project, Inder and her colleagues plan to recruit prospective LifeCodes mothers to participate in the expanded project and to collect neonatal and childhood data and biospecimens from their future children. The team will recruit women who come to BWH to give birth. Inder says that this aspect of the project has helped foster a new research partnership with Obstetrics and Gynecology.

“Even though we would see our colleagues from Obstetrics every day in the clinic delivering babies, we have never collaborated with them on cutting-edge research before,” she said.

A Special Focus on Preterm Newborns

The Healthy Start to Life team is also focusing on a smaller, targeted population to ask a more directed question: How does preterm birth affect health later in life?

In addition to studying blood samples, stool specimens and body composition in preterm and full-term infants, the team hopes to use a novel device, developed at Massachusetts Institute of Technology and based on lie-detector equipment, to measure skin conductivity and heart rate to quantify newborn stress.

Additionally, through a partnership with the Department of Radiology, Inder and her colleagues plan to use the neuroimaging facilities in the Hale Building for Transformative Medicine, along with a custom-built pediatric neonatal head piece, to take high-resolution images of newborns’ brains in the preterm birth study. This will allow the researchers to investigate not just the structure of the newborn brains but also the functional connectivity. The team hopes these images will help illustrate how preterm birth affects brain development.