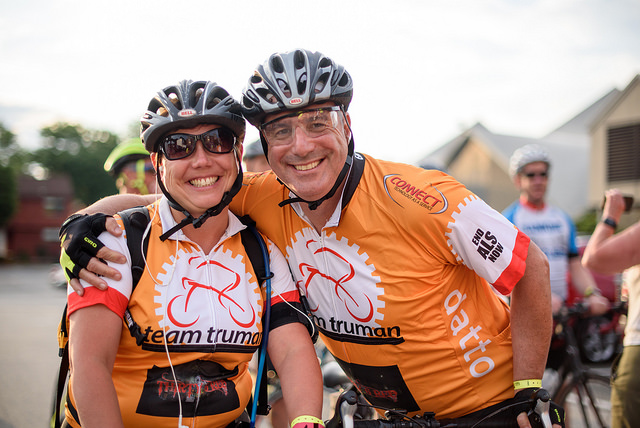 Next month, Lisa Masiello, RN, and Andris Soble, BSN, RN, will participate in a three-day, 270-mile charity cycling event across three states to raise money for amyotrophic lateral sclerosis (ALS) research and awareness – a cause that hits close to home for Masiello, whose best friend was diagnosed with the disease five years ago.

Last year, the two Shapiro 6 West Cardiac Surgery nurses rode together with Team Truman, which formed a few years ago to honor Masiello’s friend, Amy Truman. Masiello, who rode with Team Truman twice before that, was thrilled her close colleague wanted to join her in 2017 and again this year.

“We support each other both at work and outside of the hospital,” Masiello said. “It means so much that Andris is participating in the ride with me again to support my friend as well as ALS research and awareness.”

The Tri-State Trek, hosted by the ALS Therapy Development Institute (ALS TDI), began in 2003 when 16 cyclists pedaled from Boston to New York and raised $30,000 for ALS research. Since then, the event has grown to a 270-mile course with more than 450 participants, raising over $7 million to date. This year’s ride, held June 22-24, begins at Boston College in Chestnut Hill and ends in Greenwich, Conn. The event offers several options to accommodate varying rider abilities.

“Lisa was my inspiration to ride for a good cause. I am happy I did, and when a cure is found, it will feel good to have played a small part in that,” said Soble, who is participating in the event’s 100-mile route.

Masiello, who plans to complete the full 270-mile ride, said being able to bike on behalf of her friend is very meaningful. Even when pedaling up the steep hills and working her way through other difficult riding conditions, thinking about Truman and how much she has overcome, both mentally and physically, gives Masiello the encouragement to keep going.

“Amy is one of the strongest people I know,” Masiello said. “She has two young kids, and she is determined to be as present and involved as possible, even with all of the hardships she faces. She’s an inspiration to me and always will be.”

Masiello said she and her teammates have received a lot of support from Truman, who will often send motivational text messages to the group to get them excited about the trek.

“Every mile our team cycles is dedicated to my friend. We ride for Amy,” Masiello said. “I’m not going to stop riding until there’s a cure.”