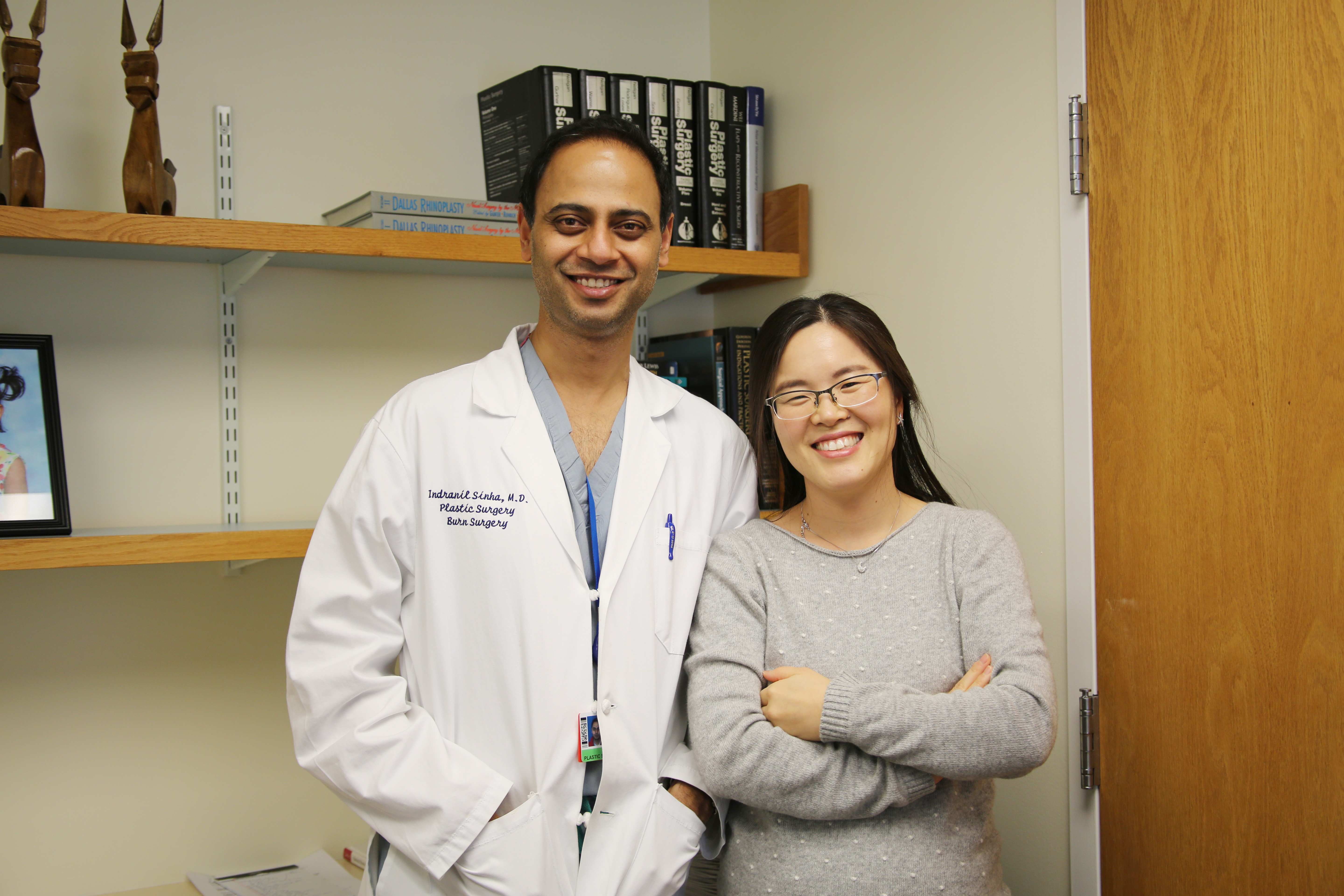 When a person suffers a traumatic muscle injury – whether from a motorcycle crash, for instance, or an explosive device – there is no way to regenerate the muscle that has been lost as a result. When the injury heals, instead of new muscle, scar tissue forms. Indranil Sinha, MD, of the Division of Plastic and Reconstructive Surgery, had an idea for how to help these patients.

He thought that by injecting skeletal muscle stem cells at sites of injury, he could help patients regrow lost or damaged muscle. In 2014, Sinha received a Stepping Strong Innovator Award to test his idea in the lab, but the stem cells wouldn’t grow and muscle wouldn’t heal. Sinha investigated further and found that growth factors critical for regeneration weren’t present where they needed to be, and muscles couldn’t grow back without them.

But just as Sinha’s promising idea began to fizzle, something else rekindled it.

The following year, Sinha joined a panel to judge the 2015 finalists for the Stepping Strong Innovator Awards competition. That’s where he heard BWH bioengineer Su-Ryon Shin, PhD, present her work with 3-D bioprinting. Sinha sought her out immediately after the presentation, and the two started talking about how they could help one another – and, ultimately, patients who had sustained muscle trauma injuries. Their conversation has continued ever since. In 2017, they received an additional Stepping Strong grant of $100,000 to join forces to continue their work together.

Failure Is the Mother of Success

On a recent afternoon, Shin arrived in Sinha’s office with happy news to share: One of her grant submissions had been scored. Sinha beamed and congratulated his collaborator, and told her he had good news, too: His had received a high score as well. They shared a moment of relief and elation – one that stood out because it was hard fought. For two years, Shin and Sinha have experienced an essential and often unspoken part of science: failure.

“Nothing in the first half of my Stepping Strong grant worked. Even when I saw Su-Ryon’s presentation, there was never a guarantee that bringing our ideas together would work either,” said Sinha. “But the Stepping Strong grant gave us the ability to try something no one had ever done before. It was a safe space in which to fail, and then try something new again. Together, we’ve been able to accomplish what neither of us could have done alone.”

Sinha speaks passionately about the needs of his patients. Unlike other diseases or injury where treatment exists but may be limited, there are currently no treatments for muscle trauma. This means that investigators like Sinha and Shin cannot follow in the footsteps of others to build on their work; instead, they need to create entirely new approaches.

Shin is a trained bioengineer whose laboratory in Cambridge includes state-of-the-art equipment, including a 3-D printer, to create new materials that can be used in the body to promote healing. These “scaffolds” can mimic the architectural structure of skeletal muscle and be loaded with slow-release treatments.

Shin and her colleagues have designed many types of hydrogels – flexible, gel-like materials – over the years for medical applications. Based on discussions with Sinha, Shin has created a hydrogel loaded with substances they hoped would encourage muscle regrowth. At first, the hydrogel’s texture was like Jello, making it difficult for Sinha to suture it to a wound. Based on this feedback, Shin redesigned it to be more like fabric.

Sinha and Shin visit one another’s laboratories often, and their teams have virtual meetings to share new insights across the lab and clinic. Other collaborations have sprung up across their teams, too. Sinha is also working on a project with one of Shin’s colleagues on bone regrowth.

“We want to decrease that gap between clinicians and engineers,” said Shin. “The conversations I’ve had with the people I’ve met through the Stepping Strong network are so useful for me and have led to new funding and new collaborations.”