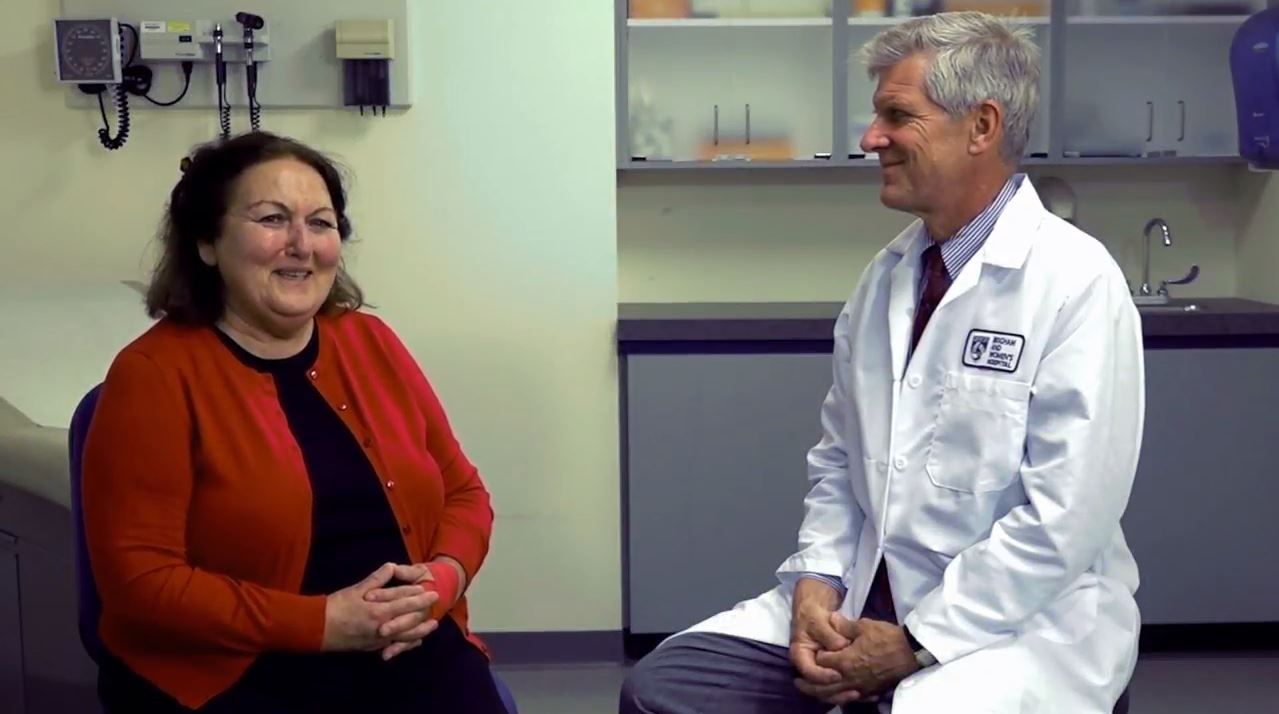 Wallis Urmenyhazi, PhD, was speaking with her primary care physician by phone after a recent chest X-ray when he said four words that would change her life: “You have a lesion.”

“I didn’t know what he meant by lesion, but he told me to see a thoracic surgeon,” says Urmenyhazi, a retired professor of French literature, who had seen her physician for a persistent cough.

After meeting with a thoracic surgeon in her home state of Pennsylvania, Urmenyhazi learned that her lesion was a thymoma, a rare disease in which a tumor grows within the thymus gland, a butterfly-shaped organ that sits in front of the heart and makes immune cells. There are only 1.5 cases of thymoma for every million people each year in the United States.

The most common treatment is to remove the tumor with surgery. Accessing a thymoma can be challenging, however. The thymus sits behind the sternum, between the lungs, and is surrounded by sensitive blood vessels. A traditional surgery opens the chest by making a large incision in the breastplate.

Urmenyhazi had misgivings. It was a major operation with a long recovery process. Her tumor had been caught early; her only symptom was a cough. Through online research, she learned that some surgical procedures approached thymomas through small incisions and used less-invasive techniques aided by video or robotic technology.

“I asked my surgeon at the time if he would perform a minimally invasive procedure, but he didn’t have that expertise. He recommended the more complex traditional operation, which had no guarantee of success,” she said.

Despite her reservations, Urmenyhazi scheduled the operation – but canceled a day later. She searched online for a surgeon with experience in minimally invasive techniques for thymoma, ultimately finding Scott Swanson, MD, director of Minimally Invasive Thoracic Surgery in BWH’s Lung Center.

A member of the surgical team for Dana-Farber/Brigham and Women’s Cancer Center, Swanson is an expert in video-assisted thoracic surgery (VATS) and teaches the technique around the world.

“After meeting Wallis, I recommended VATS, a minimally invasive procedure where we insert a tiny camera and instruments into small incisions in the chest. This allows us to access the thymus without opening the chest. Compared with traditional approaches, patients can expect less pain and a quicker recovery,” Swanson said.

The procedure was performed without complications. After the surgery, Urmenyhazi had no pain. It was almost as if the surgery hadn’t happened, she said.

VATS has been available for 25 years, but not enough surgeons are trained to do it, Swanson explained. That’s why he and members of the Division of Thoracic Surgery travel to hospitals across the globe to train surgeons in minimally invasive techniques and expand access to this lifesaving procedure.

Swanson applauded Urmenyhazi for being an advocate for her own care. “Sometimes, the patient needs to seek out the physicians who are trained to perform the most cutting-edge surgical techniques,” he said.

Urmenyhazi meets yearly with Swanson for follow-up scans. “I will be forever grateful for Dr. Swanson,” she said.