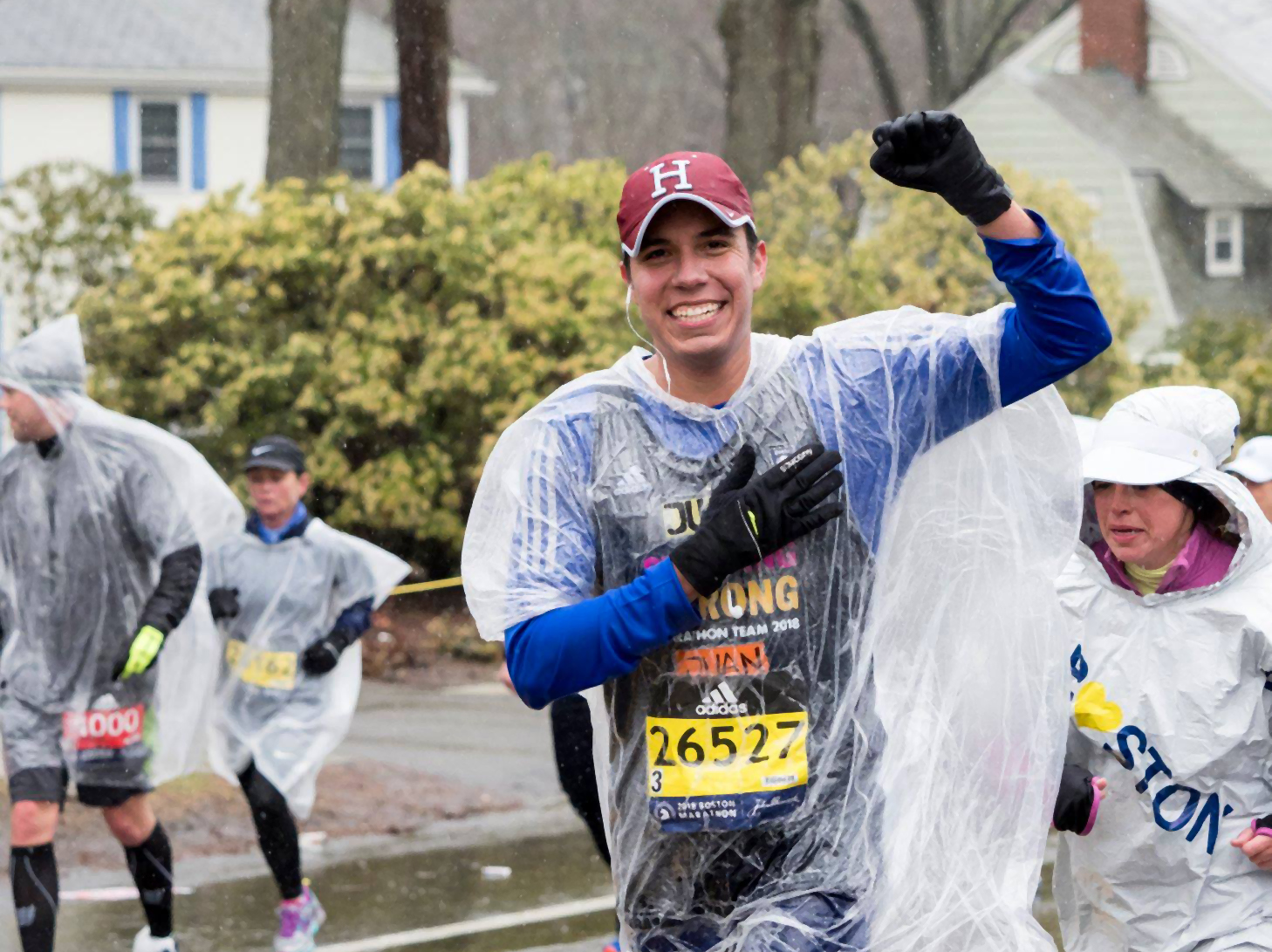 Despite the challenging weather on Marathon Monday, Stepping Strong runner Juan Herrera-Escobar is all smiles.

Mark Bergeron received the greatest gift from his family and friends for his 50th birthday last year. Knowing that Bergeron wanted to run the Boston Marathon in 2018, they promised to help him with his fundraising efforts for the team he chose to support: the BWH Stepping Strong Marathon Team.

On April 16, several members of Bergeron’s support system, including his wife, Karen, gathered at various spots along the 26.2-mile route to cheer him on as he ran his 15th marathon and first Boston Marathon. Even in the face of the miserable weather on Marathon Monday, Bergeron described his journey as an incredible experience every step of the way, thanks to the many loved ones who braved the steady rain and powerful winds to watch him run and those who rooted for him from afar.

“Because of them, I could fulfill my dream to run the Boston Marathon, all while raising funds for this fantastic program,” he said. “While this was the hardest marathon I’ve run so far, it was also one of the most rewarding experiences for me.”

This year, 140 runners participated in the 122nd Boston Marathon on behalf of the Brigham – persevering through harsh conditions to support BWH’s Gillian Reny Stepping Strong Center for Trauma Innovation. As of April 19, the team has raised more than $1.3 million this year for the center, exceeding its $1.15 million goal for the 2018 race.

The Stepping Strong Center was established by the Reny family to honor the BWH caregivers who saved their daughter Gillian’s life and legs in the aftermath of the 2013 Boston Marathon bombings. Five years after the tragedy, the center has raised more than $13 million to transform trauma research and care for civilians and members of the military who experience traumatic injuries and events.

When thinking about which charity or organization he wanted to support, Bergeron, of Topsham, Maine, said he wanted to raise money for the Brigham to give back to the hospital that provided compassionate care when his wife was a patient here several years ago.

Teammate Christine Griesmer, BSN, RN, an ICU nurse from Denver, was thrilled to return to her home state and run her first marathon with Stepping Strong – an experience she said was equal parts emotional and rewarding.

Boston resident Andrew Ouellette was also grateful he could run his first marathon with the Brigham team. Throughout the race, he reflected on the inspiring stories shared by guest speakers during a pasta dinner held for the team on Sunday night. Among those who spoke to the team were Gillian Reny; Tammy Jerome, a Brigham patient who recently underwent the novel Ewing Amputation; and Meb Keflezighi, winner of the 2014 Boston Marathon men’s race.

‘This Is Our Story’

Joann O’Brien, of Plymouth, ran her first marathon on Monday, along with her friends and Stepping Strong teammates, Kimberly Cardillo, RN, a trauma nurse at the Brigham who works in the Surgical, Burn and Trauma Intermediate Care Unit on Tower 8AB, and Meghan Schelzi, of Charlestown. The three, who call themselves “the crew,” met while training and crossed the finish line together on Marathon Monday.

O’Brien said the mission of Stepping Strong resonated deeply with her, especially after a friend experienced a traumatic injury. On Monday, O’Brien’s friend met her along the route in Kenmore Square and hugged her – it was a moment that O’Brien said she’ll never forget, adding that seeing her friend at the end of the race made the torrential rain, wind and cold temperatures all seem insignificant.

“This is our story,” O’Brien recounted. “While the race was very challenging given the difficult weather conditions, I wouldn’t have wanted to change a thing.”

View more photos from the marathon.