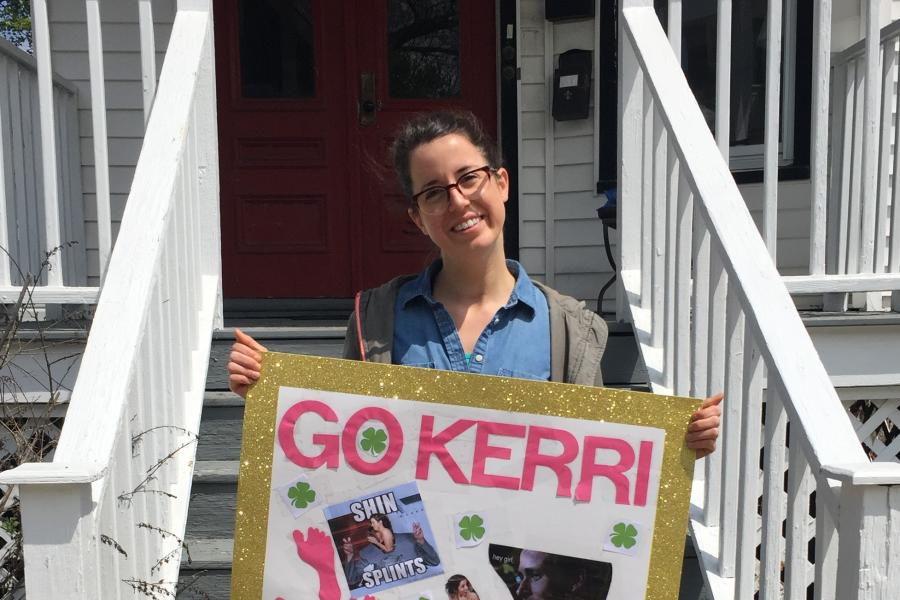 This is the final installment in a weekly BWH Bulletin series profiling runners participating in this year’s Boston Marathon with BWH’s Stepping Strong Marathon Team on Monday, April 16.

Kerri Bisaga has never been one to view obstacles as impassable. Every challenge she has encountered in life – including a cancer diagnosis at age 18 – she approaches with unwavering optimism, seeing them as adventures rather than struggles.

On April 16, Bisaga will gear up for her next great adventure when she runs the Boston Marathon with BWH’s Stepping Strong Marathon Team, which raises funds to support The Gillian Reny Stepping Strong Center for Trauma Innovation.

Bisaga said it was an easy decision to run her first Boston Marathon with the Brigham because she wants to give back to the hospital that gave her a second chance at life.

Shortly after graduating high school in 2007, Bisaga visited her pediatrician for a routine checkup. During the exam, her physician noticed a lump on her neck. Referred to specialists at BWH, Bisaga was diagnosed with malignant follicular carcinoma, a form of thyroid cancer.

True to form, Bisaga embraced positivity and said a “little thing like cancer” wasn’t going to interfere with her next chapter in life: college. Her care team worked to schedule her surgery and cancer treatments that summer so that she could leave for school in August as planned.

“Running the Boston Marathon is a dream for so many runners, and running it for a hospital that has done so much for me personally is incredibly meaningful,” said Bisaga. “Just as BWH has been a supportive safety net for me in some of my most challenging medical moments, the Stepping Strong Center provides hope for trauma patients.”

While her health has often been challenging to manage over the last decade, Bisaga said her BWH care team has supported her every step of the way. “They have always respected and believed in my dreams,” she said. “They’ve problem-solved around my goals and helped me to become the best, strongest version of myself.”

Since her surgery in 2007, Bisaga has earned two degrees and completed 11 half-marathons and one full marathon. Looking ahead to this Marathon Monday, she plans to run the entire route with a smile.

“I’ve always known this city was special and strong,” said Bisaga, a Boston resident. “Every race is a huge accomplishment for me, but running in the Boston Marathon is also going to be hugely sentimental for so many reasons.”