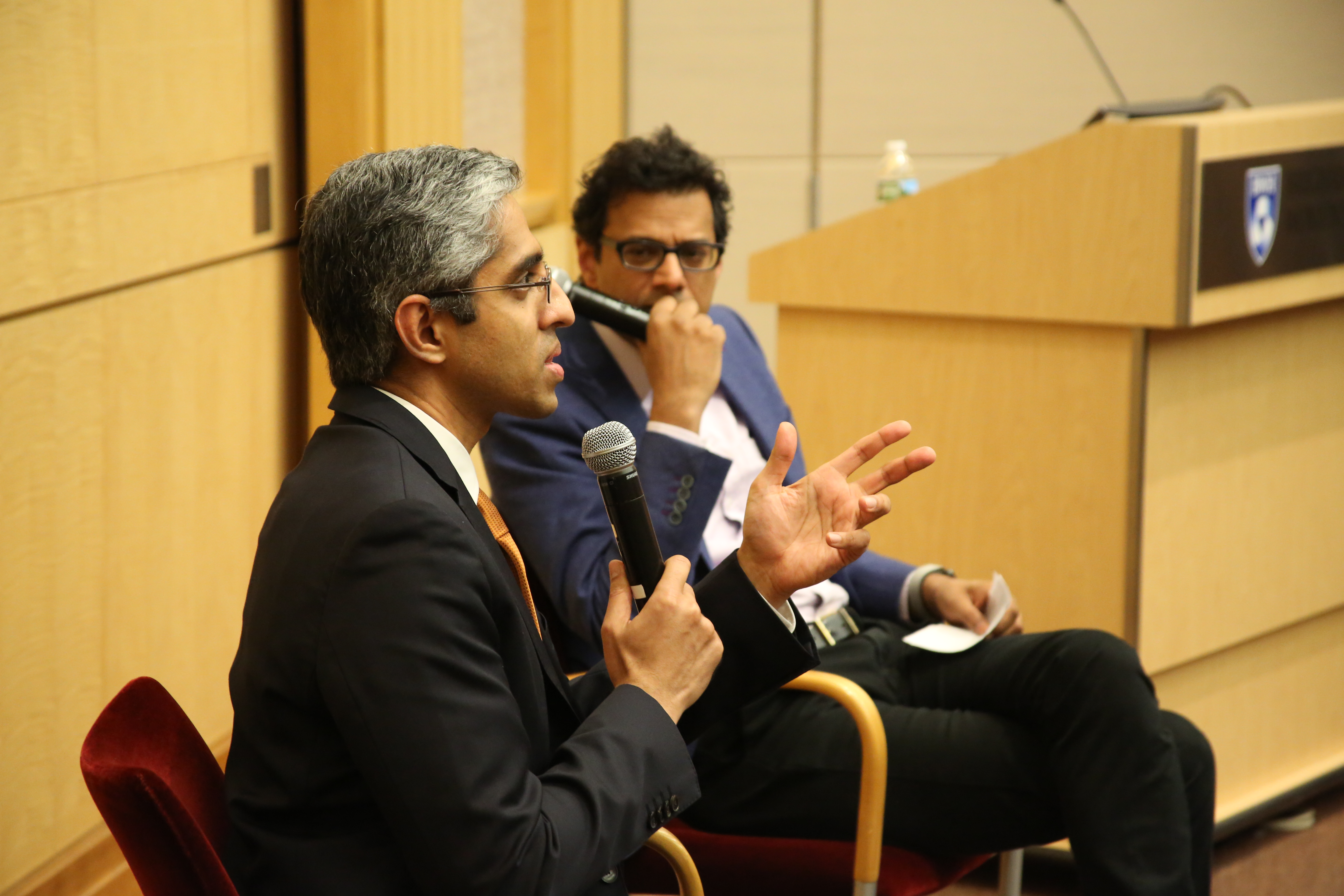 From left: Vivek Murthy responds to a question from Atul Gawande during Quality Rounds.

When Vivek Murthy, MD, MBA, was a practicing hospitalist at the Brigham, no one was more surprised than he when the White House called in 2013 to ask if he would like to serve as the nation’s 19th surgeon general under President Barack Obama.

Although it was not a position Murthy sought or even imagined as a direction his career could take, he was honored to accept the nomination. Little did he know that a comment he had shared on Twitter the prior year – asserting that gun violence is a public health issue – would become a political challenge and stall his confirmation process for more than a year.

At one point, Murthy considered the possibility of withdrawing his nomination, he recounted during an intimate, wide-ranging conversation moderated by BWH surgeon, researcher and author Atul Gawande, MD, MPH, at Quality Rounds in Bornstein Amphitheater on March 29.

“I had to ask myself, will I be able to look in the mirror if I make a decision that’s based on fear? Will I step down in the face of an attack on principles that I believe to be true – that we should all be able to speak our mind, state facts without retribution and have a debate that’s honest and fair?” he said.

Rejecting fear, Murthy instead chose hope, love and service – a recurring theme throughout the discussion, which also featured his reflections on his time in office, the complexities of the opioid crisis, how clinicians can be advocates and more.

Hope can be difficult to find amid the nation’s opioid crisis. Gawande noted that in the Shapiro Cardiovascular Center, there has been a dramatic increase in the number of patients undergoing cardiac surgery due to complications stemming from opioid use disorder. “That is how bad it is in our own community,” Gawande said.

The reasons behind the epidemic are multifaceted and complex, with clinicians, pharmaceutical companies, policymakers and stigma toward addiction all contributing to the crisis, Murthy said. And some aspects – such as why different parts of the country have been affected more so than others – are still poorly understood.

But the challenges are not insurmountable, Murthy added. Successfully turning the tide on the opioid epidemic requires a multipronged solution, involving all stakeholders, as well as the public, to support prevention models and treatment options that have historically been underfunded and stigmatized, he said.

School-based interventions, for example, that teach young children how to manage emotional pain and stress have shown to be effective in preventing substance use disorder later in life, Murthy noted. But such programs struggle to gain funding and support, he said, in large part because any initiative that takes years or even decades to deliver results is often politically unpopular.

“Opioids do not have a clean, simple solution,” Murthy said. “There are multiple strategies we have to deploy, and one of my concerns is that the response has been very fragmented and it often hasn’t been sufficient in either breadth or depth.”

Similarly, he added, there is strong evidence showing that medication-assisted treatment – such as methadone or buprenorphine – is a highly effective therapy for opioid use disorder, yet it remains underutilized, Murthy said.

“The majority of treatment facilities still do not offer medication-assisted treatment,” he said. “Many of them offer models that focus entirely on abstinence or on non-evidence-based approaches, costing patients tens of thousands of dollars per year without delivering the treatment we know to be effective. This is a massive waste of money and effort, and lives are being lost the process. On a policy level, we need to start paying for what works.”

While this is largely an issue of access, Murthy and Gawande also pointed to widespread misconceptions and stigma that still surround medication-assisted treatment.

“Imagine it’s 1995: We’re at the peak of the AIDS epidemic. We’ve got a cure that works in 80-plus percent of people, and we’re debating whether we want to give it to them,” Gawande said.

Responding to a question from the audience about how clinicians can advocate for change, Murthy said that simply ensuring their voices are heard – by lawmakers and local communities – is incredibly important.

“All of us have read about how faith in public institutions and politicians is dropping, but the professions of medicine and nursing still hold a high degree of trust,” he said. “To me, with that trust comes a responsibility. At a time when people are wondering what issues to support and whom to trust, the voices of people in this profession stand out as those that need to be heard now more than ever.”

View a recording of the event here (must be on the BWH network).