This is the second article in a weekly series in BWH Bulletin profiling runners participating in this year’s Boston Marathon with BWH’s Stepping Strong Marathon Team on Monday, April 16. 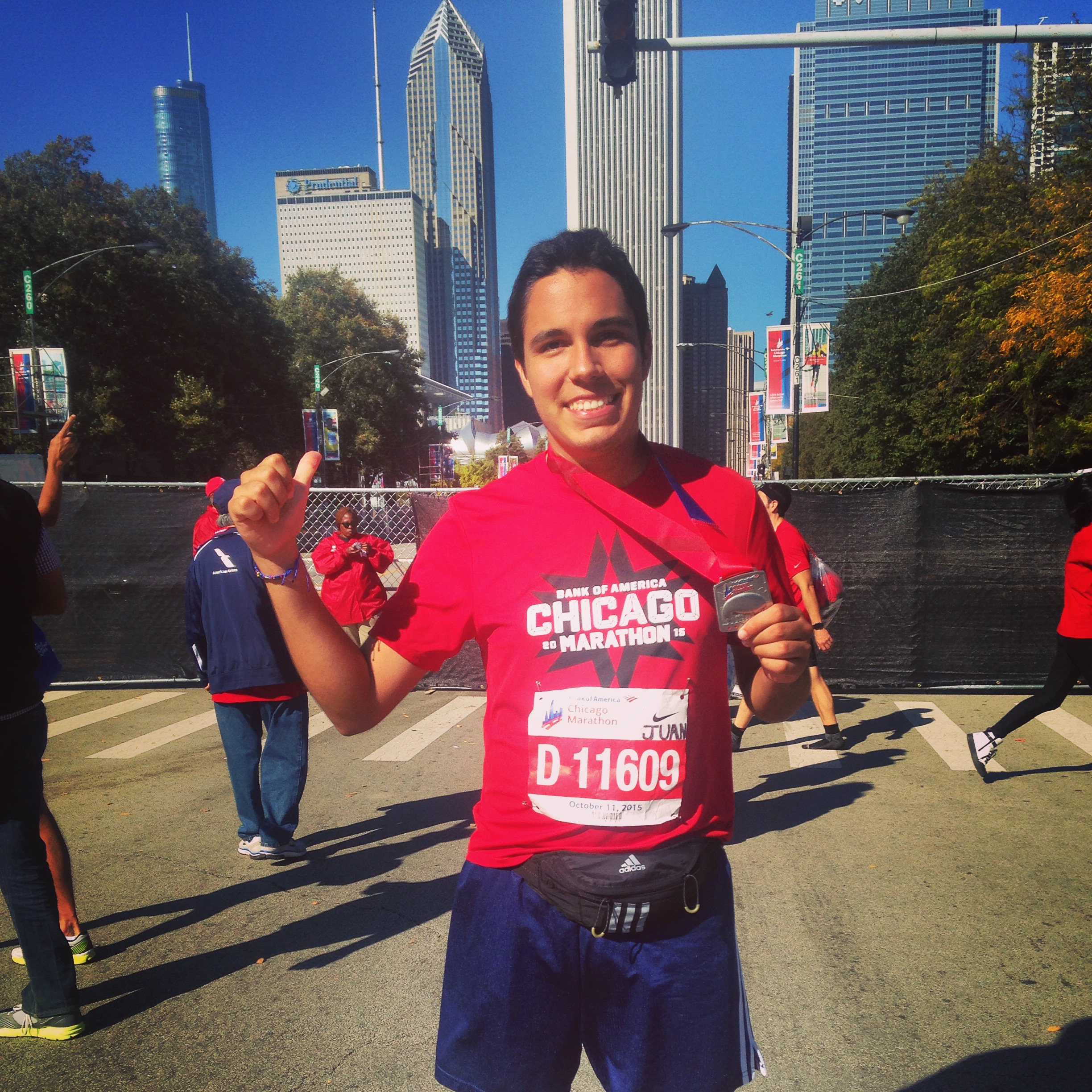 Juan Herrera-Escobar completes a marathon in Chicago in 2015.

As a medical student completing a rotation at a hospital in Cali, Colombia – once considered one of the most violent cities in the world – Juan Herrera-Escobar, MD, was deeply affected by the staggering number of patients with traumatic injuries he saw in the emergency department.

Upon graduation, he was dispatched to a hospital in Cali to complete one year of public service as a general practitioner – a federal requirement for medical graduates in Colombia. Serving patients brought in from areas rife with confrontations between guerilla fighters and military, Herrera-Escobar treated many victims of traumatic injuries caused by grenades, landmines and gun violence.

“One of the things that really moved me while I was completing my training was the realization of how young these patients were. I could be one of them. It drove home that trauma is killing young people,” said Herrera-Escobar. “That really touched me. I knew this was something we need to fix – and it can be fixed. I got really interested in seeing how we can prevent traumatic injuries and respond better when they do occur.”

Now a trauma researcher in the Center for Surgery and Public Health (CSPH), Herrera-Escobar is trying to make a difference in advancing trauma care on multiple fronts. In addition to his work at the Brigham, he is running in this year’s Boston Marathon with the BWH Stepping Strong Marathon Team. With a mission to turn tragedy into hope, funds raised by the team support trauma research and care.

“When I was in Colombia, I knew that research funding was very limited for all areas of disease and conditions. I never would have imagined how huge the gap was in the U.S. between trauma research and other areas, such as cancer or heart disease,” Herrera-Escobar said. “Trauma is killing a lot of people, and we need to do something. Stepping Strong is sending a powerful message about this, and I am so excited to support them.”

In his research at CSPH, Herrera-Escobar works with Adil Haider, MD, of the Division of Trauma, Burns and Surgical Critical Care, to study long-term effects on quality of life for those who have suffered traumatic injuries. After learning that no registry existed to sufficiently support research in this area – at least not with robust data about patients post discharge – the team launched the Functional Outcomes Recovery and Trauma Emergencies (FORTE) Project. In collaboration with Massachusetts General Hospital and Boston Medical Center, they are working to build a registry that could be used to better track long-term health concerns and identify interventions.

Looking ahead to the marathon, Herrera-Escobar said it will be special to participate on behalf of an organization to which he has so many personal and professional connections.

“These past few months have been an incredible experience. I’m so excited for the race, especially because it really ties into what I’m doing every day,” he said. “It’s been really meaningful.”