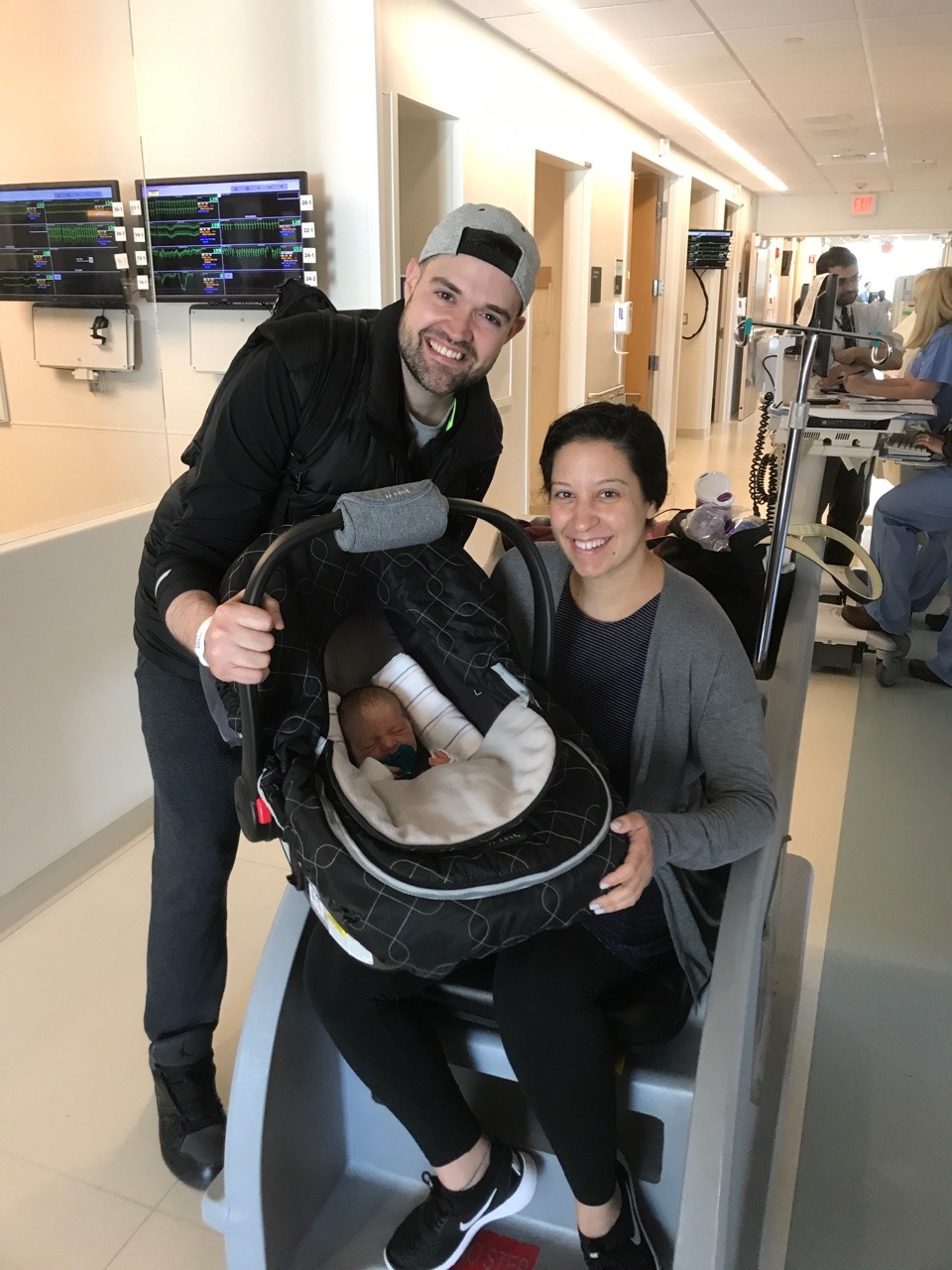 Paul and Kelsey Brogna prepare to go home with their son, Luca, last spring after he was discharged from the NICU.

This is the first article in a weekly series in BWH Bulletin profiling runners participating in this year’s Boston Marathon with BWH’s Stepping Strong Marathon Team on Monday, April 16.

Like many expectant parents, Paul and Kelsey Brogna eagerly awaited the birth of their first child and the exciting milestones that would follow – the first glimpse of his face, the first touch of his hand and the first photo they would take as a family.

When several unforeseen complications occurred during labor and delivery, they feared the worst. But thanks to the advanced, expert care Kelsey and Baby Luca received at the Brigham last spring, including a 13-day stay in the Neonatal Intensive Care Unit (NICU), the Brogna family celebrated those joyous firsts and many more.

Next month, they will add two more milestones to their list. Paul will participate in his first marathon – running in support of the Brigham with the Stepping Strong Marathon Team – followed by Baby Luca’s first birthday a few days after the race.

“Brigham and Women’s saved our son’s life, and I wanted to give back to the hospital that has given our family this priceless gift,” Paul said. “This hospital is an amazing place, and we felt so blessed to be there. I wanted to do anything I could to pay it forward.”

In addition to the expert medical care Luca received in the NICU, Paul said they were overwhelmed by the unwavering kindness, compassion and professionalism of BWH staff throughout their stay. Countless gestures – from a housekeeper’s warm smile to a surprise photo collage made by Luca’s care team – provided comfort during a stressful time, Paul recounted.

“Every single person we encountered did their job phenomenally,” he said. “The staff are unsung heroes and the glue that allows families like us to have a chance for healthy recoveries. Without them, none of this is possible.” 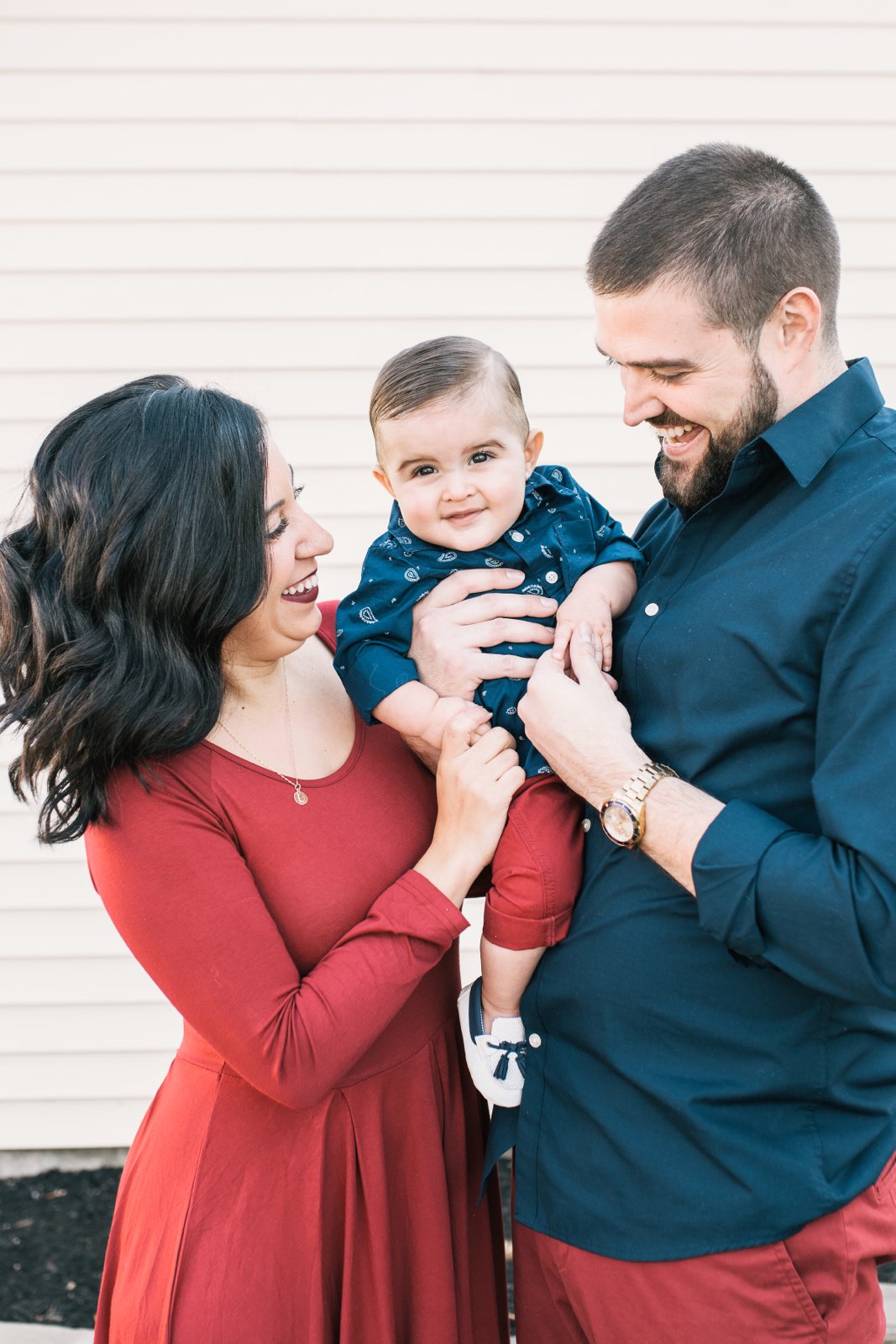 The Brognas chronicled their experiences on a blog to keep family and friends updated. As time went on, it provided a therapeutic outlet for the couple as well as an opportunity to publicly thank Luca’s wonderful care team, Paul said.

The physical space of the NICU – which recently completed its third and final wave of expansion and renovation – also contributed to their exceptional experience, he added. They appreciated having a private, spacious room with a pullout couch and closet, allowing them to stay overnight.

“We tried to stay there almost every night,” Paul said. “We felt like we were in the best place in the world.”

Eager to find a way to support other BWH patients and families, Paul began searching for fundraising opportunities a few weeks after he and Kelsey brought Luca home. He was drawn to the Brigham’s marathon program.

Lacking much running experience, he was initially a little daunted by the team’s training schedule, which began in December with six- to eight-mile runs. To prepare, Paul started training on his own in October and November.

“I’ll never forget the first weekend. It took 12 minutes to run a mile, and I stopped three times. I thought I made a huge mistake,” he said. “But little by little, I added a mile each weekend and by December I did a half-marathon. The idea that I could knock out 10 or 20 miles now is unbelievable to me.”

With much to look forward to on Marathon Monday, Paul said he’s excited not only to accomplish something he once thought was impossible, but also to give back to the Brigham.

“While our experience ignited this journey, I’m not doing this for Luca or for us. It’s for the next person who will need help,” Paul said. “I’m so grateful and happy to be part of a much bigger cause.”

One Response to “Grateful for a ‘Priceless Gift,’ Boston Marathon Runner Gives Back to BWH”