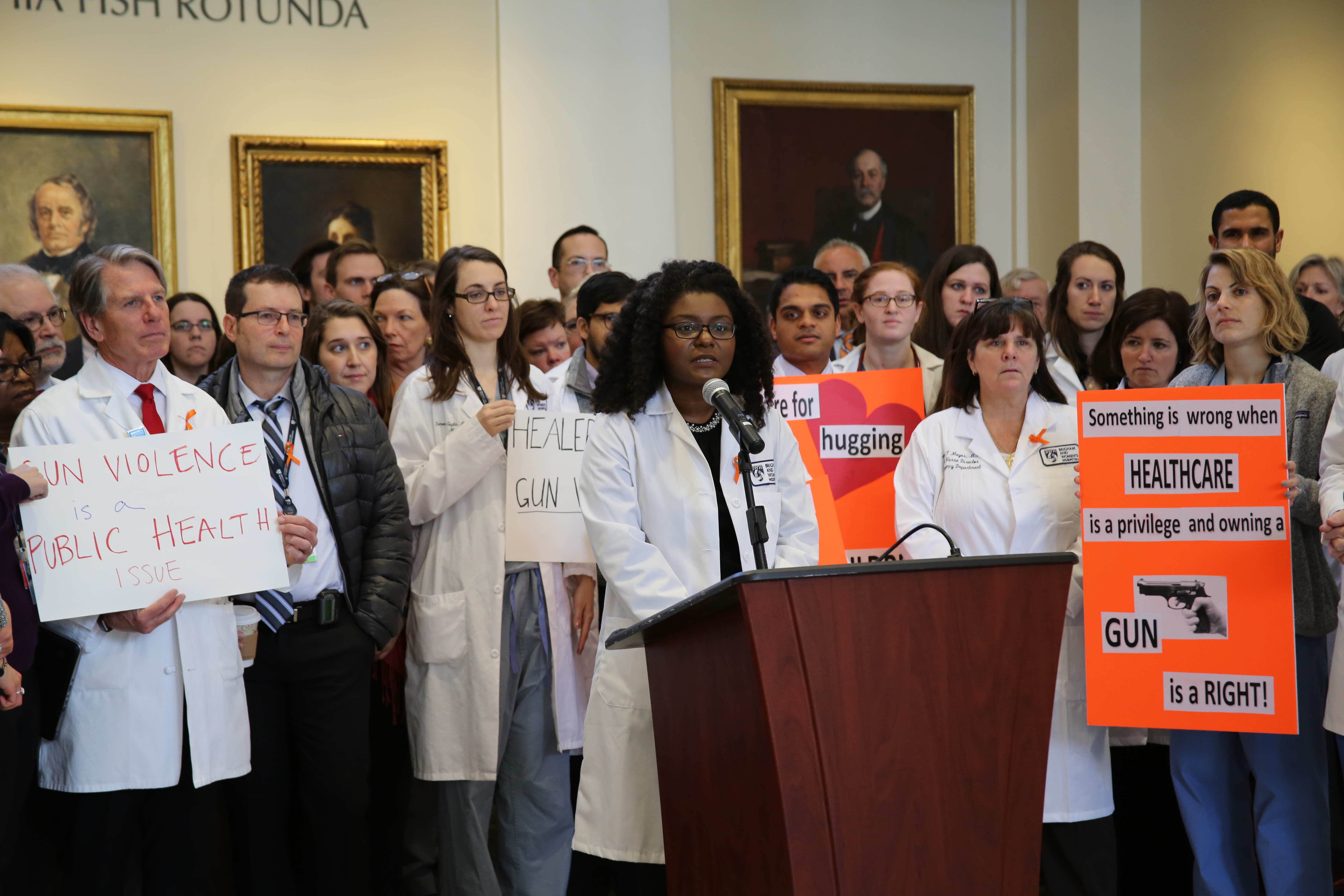 At podium: Lachelle Weeks, joined by colleagues from across BWH, discusses the public health implications of gun violence.

When the news broke last month that there was yet another school shooting, Internal Medicine resident Lachelle Weeks, MD, PhD, chair of the Resident Social Justice Committee, said BWH residents shared in the profound sadness and frustration that has been displayed across the U.S. They were upset that once again firearms took the lives of schoolchildren and that these events are happening with growing frequency.

“Gun violence is a uniquely American public health crisis,” said Weeks, also a member of the Brigham Health Social Justice and Health Equity Task Force. “As clinicians, we are first responders – we treat the physical damage caused by guns. We nurse patients back to health. We comfort families and loved ones and counsel patients who are traumatized from being shot or shot at. It is our privilege to serve in this way, but it is our responsibility to ensure the incidents of preventable deaths, trauma and injury are reduced whenever possible.”

On March 14 at 10 a.m., exactly one month following the shooting at Marjory Stoneman Douglas High School in Parkland, Fla., health care professionals around the country, including those at BWH, came together to take a stand against gun violence.

At the Brigham, BWHers gathered in the Fish Rotunda at 15 Francis St. for a brief event, “Healers Stand Against Gun Violence,” hosted by the BWH Resident Social Justice Committee. Weeks and Charles Morris, MD, MPH, associate chief medical officer, offered reflections on gun violence as a public health issue. Chaplain Elizabeth (Elli) Goeke of Spiritual Care Services provided a moment of reflection in honor of all those affected by gun violence.

The event was one of many taking place nationwide that morning, with students across the country conducting walkout protests in solidarity with students in Parkland and to honor the 17 victims of the Feb. 14 shooting.

While gun violence is an ongoing concern for many people, it is often a single event or statistic that compels them to speak out, Morris said.

“We are all moved by numbers. Perhaps yours is 17, the number of children and adults who died in Parkland, Fla., on Feb. 14. Or maybe it’s three, the number of psychotherapists killed this past Friday in California. Or 30,000, the annual deaths in this country due to firearms,” he said. “Or maybe it’s one: the friend, fellow physician and college classmate you lost to firearm violence.”

‘At the Forefront of Health and Change’ 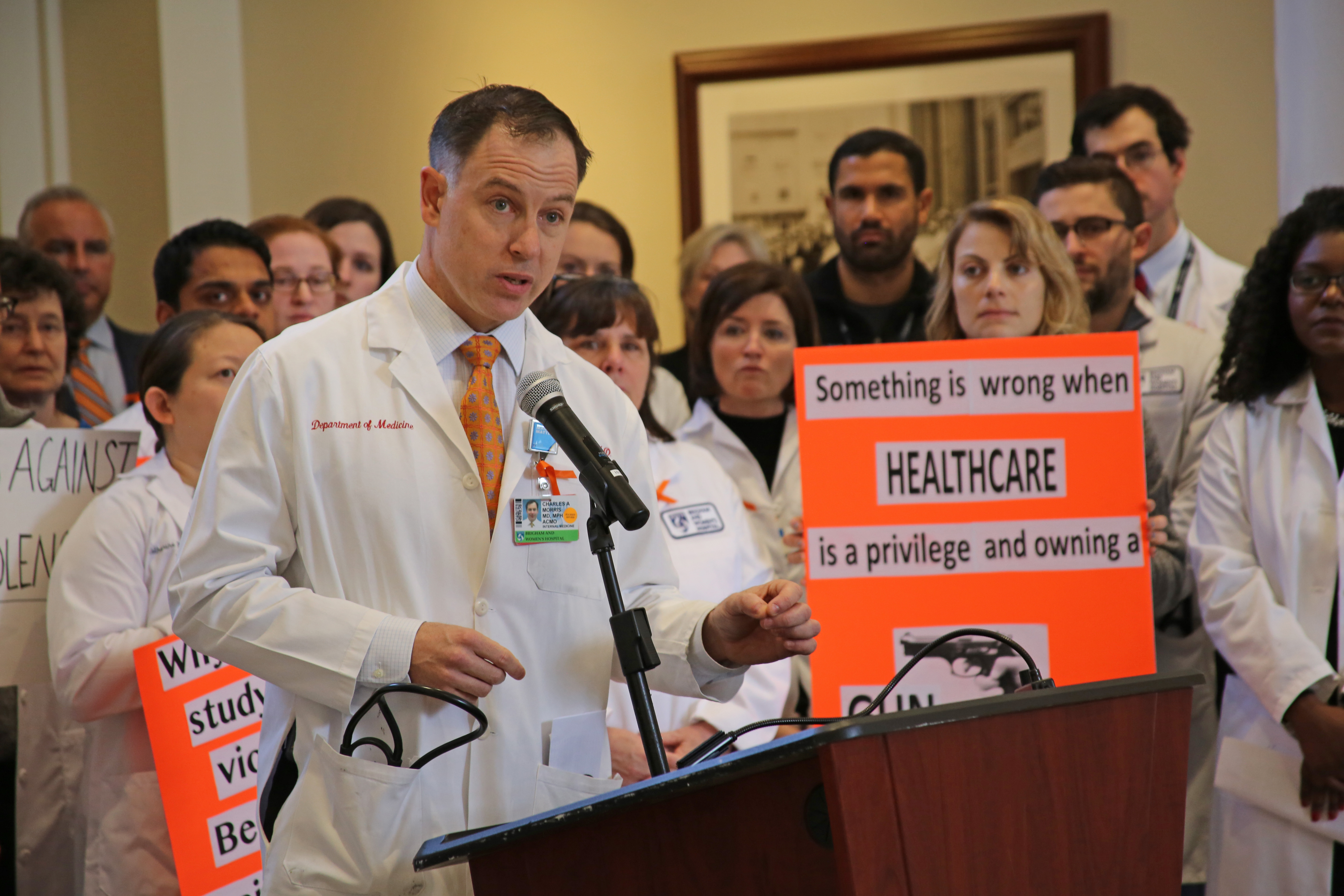 Charles Morris encourages attendees to channel their grief into action and advocacy for treating gun violence as a public health concern.

Morris, who recently co-authored an article in The New England Journal of Medicine about gun violence as a threat to public health, underscored the important role that health care professionals can play as advocates for patients and families.

“This hospital ID badge isn’t a participation medal. It’s a symbol of our commitment to safeguard our patients’ health and to push relentlessly as part of a larger force to be at the forefront of health and change,” Morris said.

Weeks added that clinicians at the Brigham and beyond can help make a difference by contributing to the discussion on various fronts. She advocated for research, legislation and funding focused on treating gun violence as a nationwide health concern, in addition to continued support at the local level, including programs and committees at the Brigham.

“We stand together to remember the men, women and children who have lost their lives and had their lives forever changed because of a gun. We honor their memory by calling attention to this public health issue with our presence, our voice and our action,” Weeks said. “We stand asserting that deaths and injuries from gun violence are not political, but instead are preventable tragedies.”

Morris explained that while it’s important to reflect on and grieve for those affected by these tragedies, our collective responsibility doesn’t end there.

“Don’t let these events push you to a standstill. Be moved not just to emotion but to motion. And should you need it, this room is filled with people who can help you,” Morris said. “So I ask: what is your number? How does it move you? How will you move?”

One Response to “BWHers Stand in Solidarity Against Gun Violence”