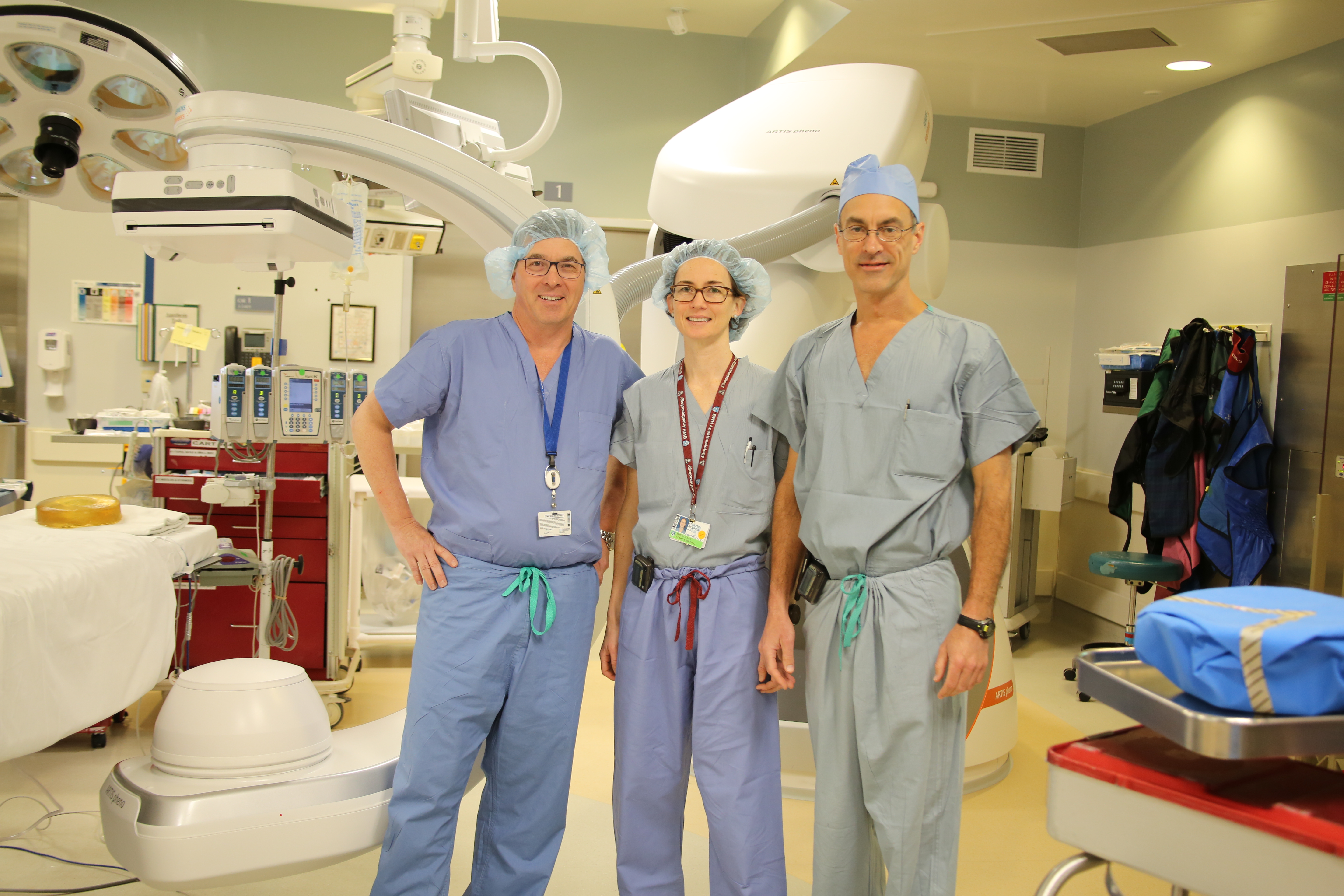 From left: Michael Belkin, Felicity Billings and Edwin Gravereaux, beside the ARTIS Pheno imaging system in BWH’s hybrid OR.

BWH surgeons and interventionalists working in the Michael J. Davidson, MD, Hybrid Operating Room are among the first clinicians in the Northeast to use the new ARTIS Pheno angiography imaging system.

The Brigham has a rich history of pioneering technologies and imaging tools in the hybrid operating room (OR) to deliver the most advanced care to patients. Some interventions that once took place over several days – historically in multiple operating rooms and diagnostic labs – can now be done over the course of one visit in the hybrid OR. BWH was the first hospital in the U.S. to use the ARTIS Zeego system, the Pheno’s predecessor, in the OR.

Known as “C-arms” for their C-shaped design, the Zeego and Pheno perform real-time X-ray imaging during angiograms and therapeutic procedures. Both are designed to rotate completely around a patient’s body, making it easier to diagnose a condition in the OR and, if necessary, immediately operate.

BWH clinicians are using these imaging systems to guide increasingly complex procedures, such as aortic valve replacements and transcatheter aortic valve replacements (TAVRs). These require high-quality, granular imaging – an area in which the Pheno offers several improvements, according to Michael Belkin, MD, chief of the Division of Vascular and Endovascular Surgery.

“The Pheno algorithms will allow us to better perform these procedures,” he said. By better, Belkin means faster imaging, less radiation exposure for patients and interventional surgeons, and higher-quality images. Resolution for two-dimensional imaging in Pheno is four times higher than in the older device.

“This trial requires a thoracotomy – a surgery to open the chest wall – which we will perform in the hybrid OR. It’s a perfect example of where the Pheno will be really useful,” Kaneko explained, as the newer system will provide better visibility and resolution with less contrast load.

In addition to the new system’s advanced capabilities, parts of its design are expected to improve care quality and safety for patients in the hybrid OR, providers said. Pheno’s wider-space robotic C-arm moves more easily in and out of the patient field without interrupting the sterile surgical field. And as a more closed system compared to the Zeego, the Pheno is easier to keep sterile.

“The Zeego moves like an old-generation robot, whereas Pheno will be silky smooth when the arm moves and will make our procedures much, much easier,” Kaneko said.

The new device also enables clinicians to obtain images faster. “We want to see the image in a matter of seconds, especially when working on an urgent or complex case,” said Kaneko. This isn’t only a matter of convenience; it also concerns patient safety. Because the Pheno scans up to 15 percent faster than earlier systems, images are produced with less IV contrast – an added benefit, as contrast can tax the kidneys.

While the Pheno likely won’t be used for conventional open cardiac, thoracic or endovascular procedures, Belkin is enthused about the device’s potential benefits for patients for whom its use is appropriate.

“We are already doing hundreds of cases every year in the hybrid OR now,” Belkin said. “With this newest machine, we can deliver even better care to our patients.”