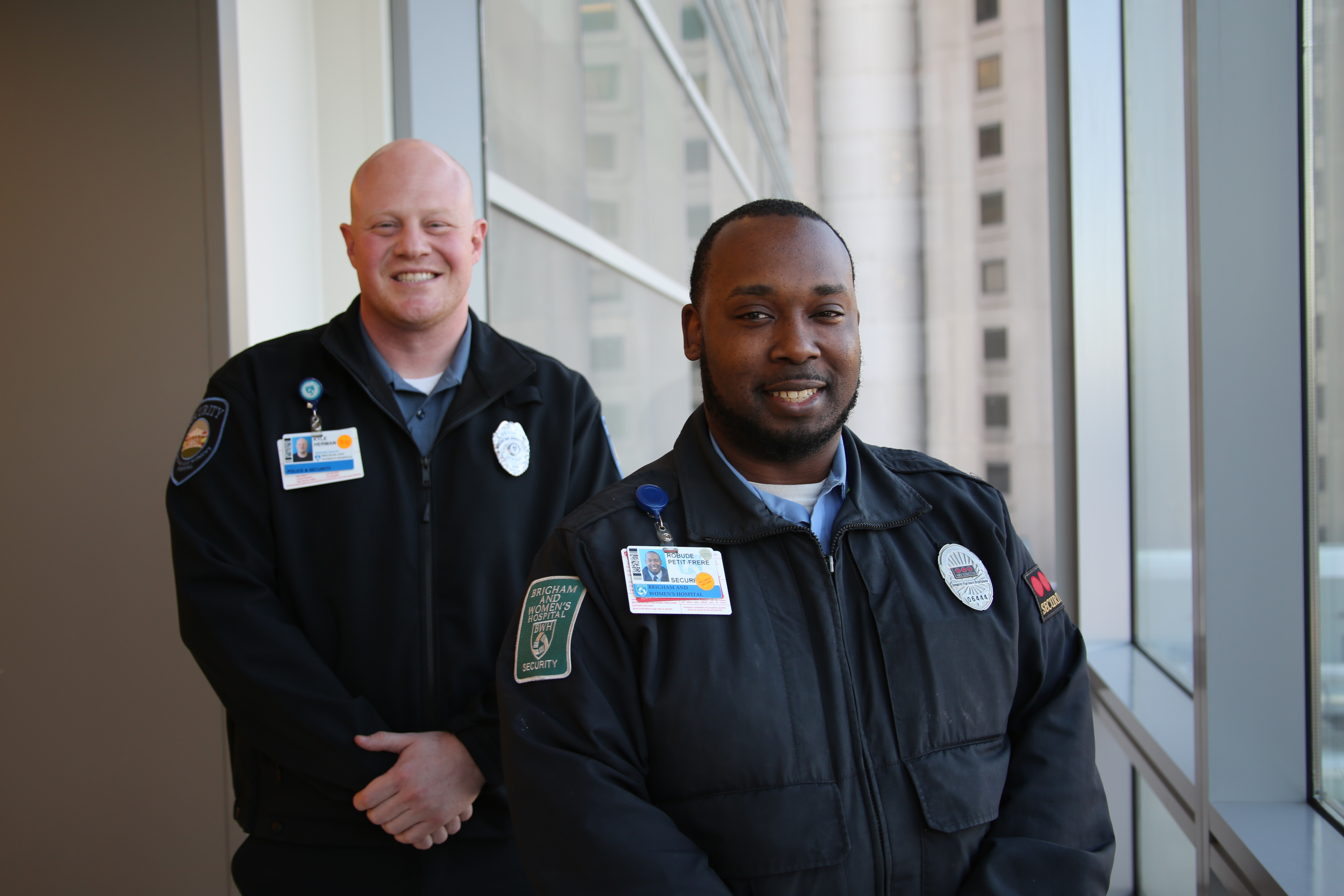 To help staff prepare for the Magnet site visit occurring March 26-29, each week BWH Bulletin will feature an example of a hospital initiative that demonstrates how the Brigham exemplifies the hallmarks of a Magnet institution.

When BWH Security Officer Robude Petit-Frere responded to a recent Code Blue, he encountered a frightening scene: A patient in a wheelchair was unresponsive and not breathing. Bystanders cried out for help and indicated the person had suffered an opioid overdose. The code team was on the way, but the patient’s condition was deteriorating quickly.

Every second counts during an opioid overdose. Rapid administration of the drug naloxone – a fast-acting medication that can reverse an overdose – can mean the difference between life and death.

Thanks to training he had received as part of an institutional protocol developed by an interdisciplinary team at the Brigham, Petit-Frere successfully assessed the situation and administered naloxone to the patient. The individual immediately resumed breathing and was soon treated by medical personnel.

Through this initiative, Security officers like Petit-Frere, who are often the first responders to emergencies around campus, and code team nurses are now trained to carry and administer this lifesaving medication at the earliest opportunity.

“I acted quickly. If it had been a few seconds longer, that patient may not have made it,” Petit-Frere said. “At that moment, I recognized how important this training is.”

The interdisciplinary nature of this work has been key to its progress, said Karen Griswold, MBA, BSN, RN, CPPS, a program manager in the Department of Quality and Safety and co-chair of the Emergency Response Committee. Code team nurses and nursing leaders have been important and supportive partners in this work, she added.

“By bringing everyone’s skills, experience and perspective to the table, we were able to create a much more robust program to deliver the best care to patients,” Griswold said.

Bringing Everyone to the Table

Recognizing that first responders like police officers and firefighters are often the first on the scene during an opioid overdose – and could be trained to safely administer intranasal naloxone – the state passed a law permitting nonclinicians to treat someone experiencing an opioid overdose with this fast-acting medication.

This paved the way for the initiative at the Brigham, explained Griswold. Officers are now trained at the Neil and Elise Wallace STRATUS Center for Medical Simulation, where they learn how to identify the signs of an overdose and use simulation manikins to practice administering of intranasal naloxone and performing other basic life support techniques.

Prior to this effort, there had been a handful of incidents involving an opioid overdose in public areas of the hospital between 2015 and 2016. In each case, Security officers had been the first on scene.

Although such events are rare, an interdisciplinary team recognized an opportunity to intervene sooner. Representatives from Emergency Medicine, Nursing, Pharmacy, Quality and Safety, and Security convened a task force to design and implement the naloxone protocol. It has already saved lives, and based on its success on the main campus, the program has since expanded to several locations across distributed campus.

“Depending on where they are in the hospital, it can take a code team six to eight minutes to arrive on scene,” Griswold said. “We know that Security officers are frequently on site much sooner, often being the ones to radio dispatch to report the code. This protocol empowers them, in the event of an overdose, to assess the situation, take action as soon as possible and give a patient the best chance for survival.”

Visit BWHPikeNotes.org/magnet to learn more about the Brigham’s journey to Magnet designation. Resources include informational videos, frequently asked questions, a countdown to the site visit and instructions for accessing the body of evidence BWH submitted to the American Nurses Credentialing Center. The naloxone protocol is highlighted in Structural Empowerment (SE) 1EO section of the submission.