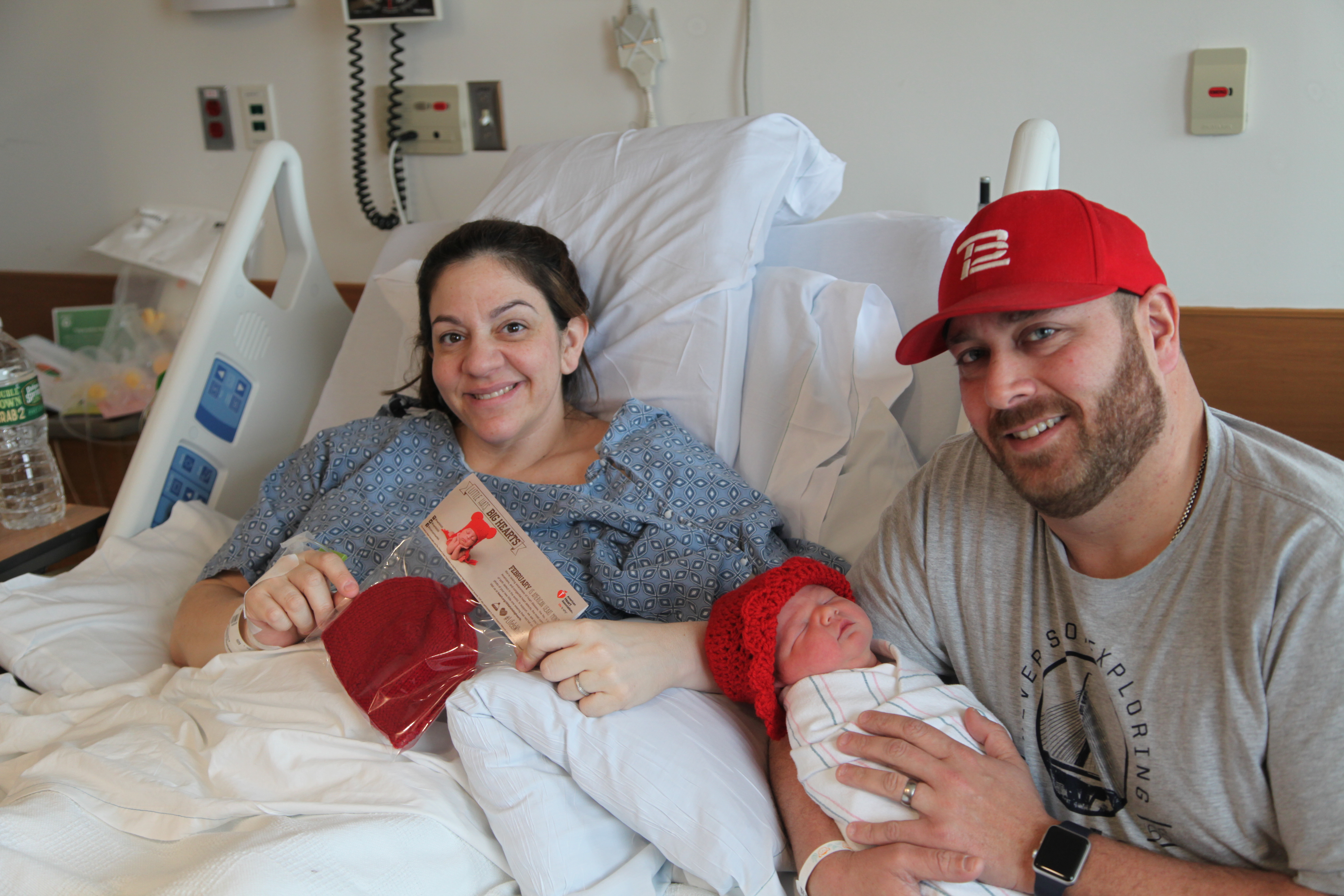 Stephanie and Larry Harmon receive a red hat for baby Stella as part of the Little Hats, Big Hearts program.

When Labor and Delivery nurse Denise Giller, RN, asked her BWH colleagues to help knit and crochet hundreds of tiny red hats for babies born at the Brigham – in honor of American Heart Month in February – she wasn’t sure what to expect.

She set an ambitious goal of 450 hats, correlating to the approximate number of infants delivered at BWH each month. But soon enough, the collection box in the staff lounge on CWN 5 began to fill up. One NICU nurse dropped off 106 homemade hats. A nurse working the night shift texted Giller a photo of her and her colleague crocheting hats during their break. Giller also enlisted help from friends and family; many BWHers shared the message with their own loved ones, as well.

“I didn’t think we were going to have enough hats, but then they poured in,” said Giller, who ultimately collected 550 hats, which are being distributed to infants in the Connors Center for Women and Newborns throughout February. “I am so grateful for every single hat that was made and for the people who helped spread the word. This would not be possible without everyone’s help.”

The project is part of Little Hats, Big Hearts, a nationwide program sponsored by the American Heart Association (AHA) and The Children’s Heart Foundation to raise awareness about heart disease and congenital heart defects. Volunteers knit and crochet red hats for babies born in February; once cleaned, the hats are packaged by the AHA and delivered to participating hospitals for distribution to patients and families.

This was the first year BWH participated in the initiative, which Giller spearheaded after learning about it last fall and contacting the AHA to implement it at the Brigham. While the AHA typically receives hats from the general public, BWH was the first participating Massachusetts hospital whose contributions largely came from the institution’s staff.

Stephanie and Larry Harmon, who recently celebrated the birth of their second daughter, Stella, were the first family to receive one of the signature red hats. The Stoughton couple said they were deeply touched by the thoughtfulness of BWH staff. 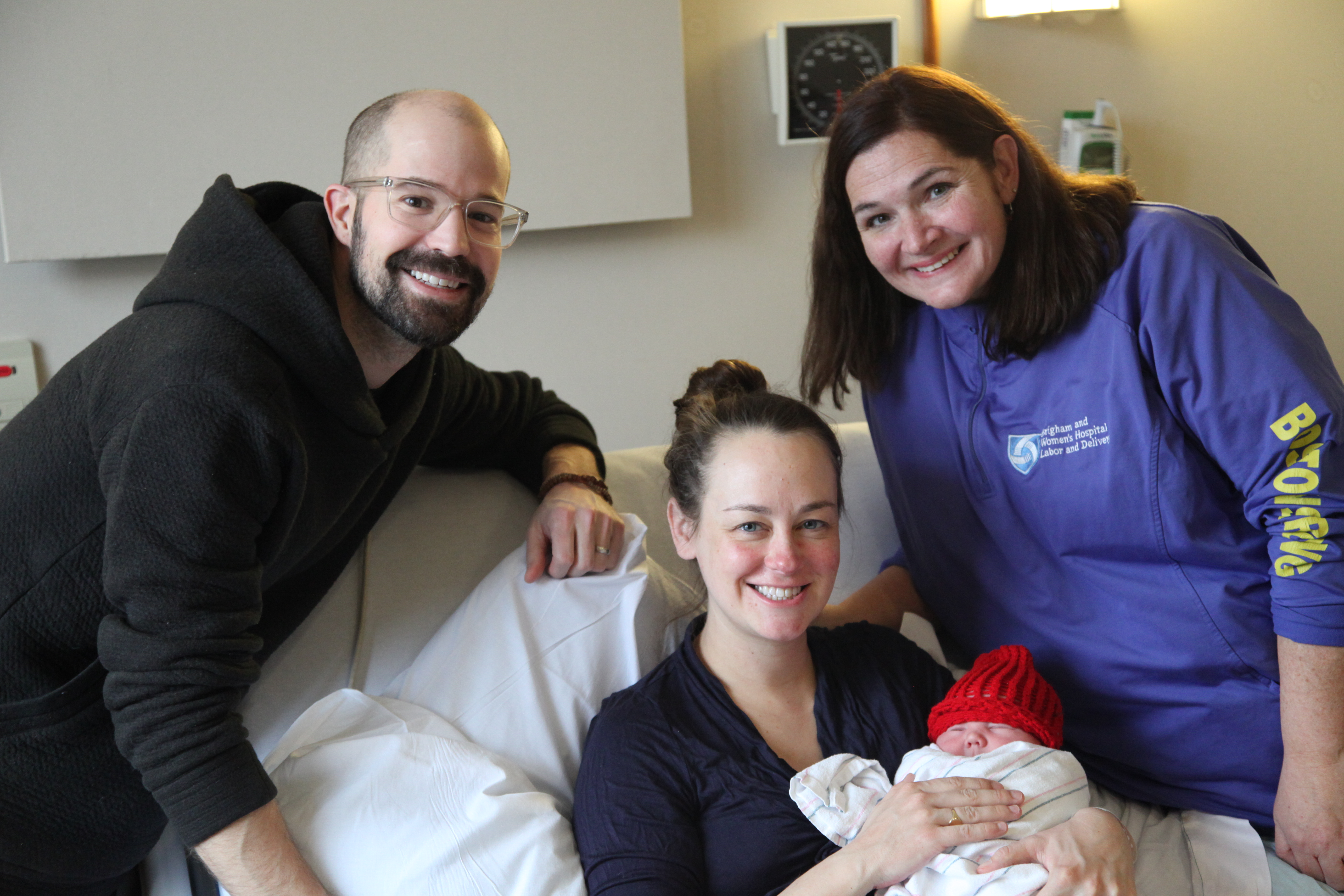 From left: Matthew Carrow and Anna Ballard with their son, Leland, and Denise Giller. Baby Leland was the second infant to receive a red hat.

“To hear that Brigham employees themselves knit these 550 hats blew my mind,” Stephanie said. “They work around the clock here to provide incredible care, and then to know they carved out time at home to make these hats really made it clear to us how much they care for patients and families.”

That warmth and commitment to patients are what make the Brigham stand out, she added.

“We wanted to deliver at the Brigham because we knew it was going to be best care all around,” Stephanie said. “Everyone here truly cares about you and your baby. You don’t necessarily get that experience everywhere. At the Brigham, I knew we would.”

Giller agreed, adding that she was proud to work with so many dedicated professionals.

“What we accomplished speaks volumes to the dedication of our staff, who care about our patients far beyond their shifts,” Giller said. “As a Labor and Delivery nurse, I love being part of patients’ lives during the miracle of birth. When you get to deliver something else – in this case, a warm hat and additional patient education – it makes what we do even more rewarding.”