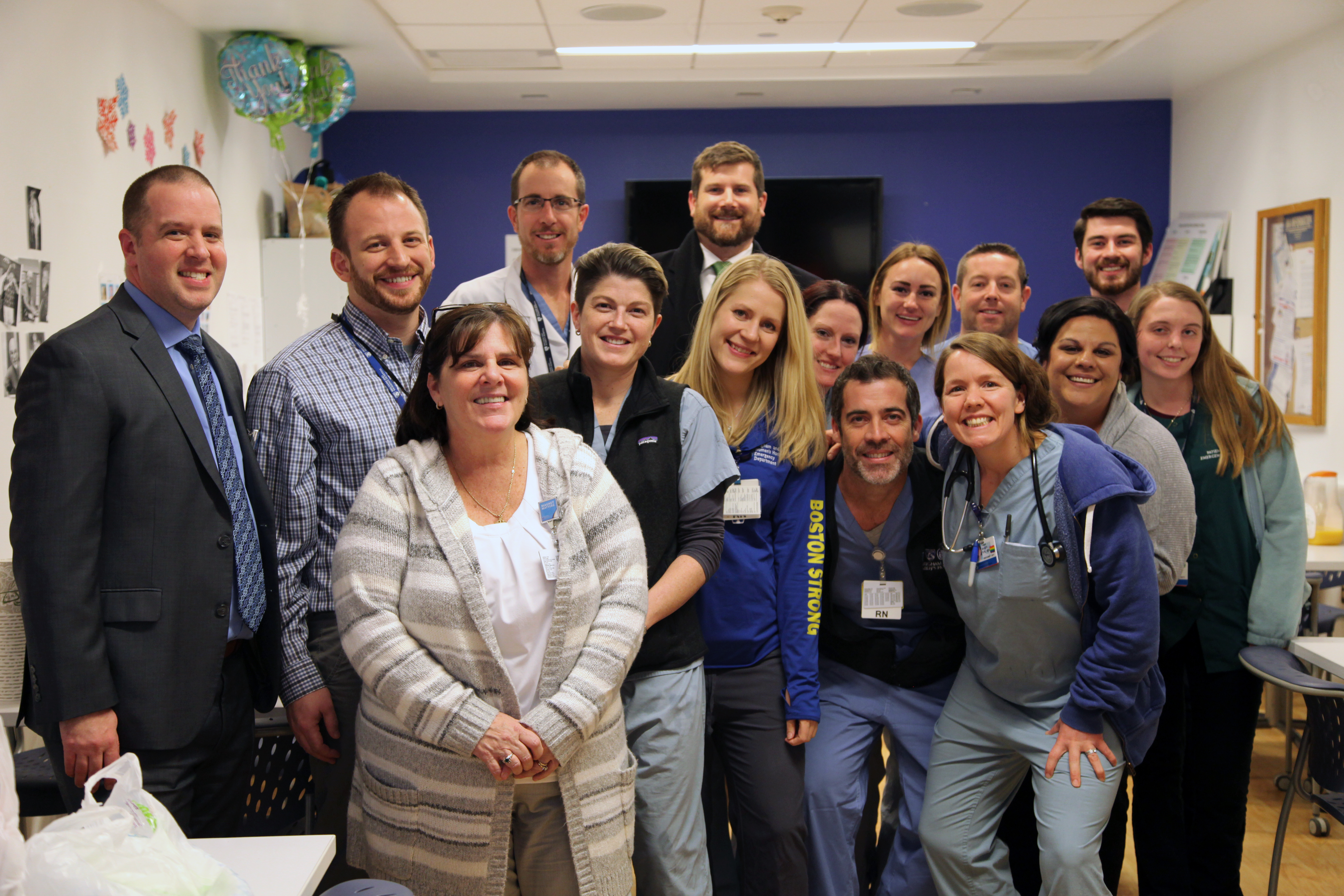 Emergency Department staff gather to celebrate a year of a sustained reduction in walkout rates.

A cornerstone of any emergency department (ED) is to see the sickest patients first – a practice that has saved countless lives. But it has the unintended side effect of leaving patients with less-acute symptoms waiting to be seen by a physician when the department is at capacity.

“Previously, some patients waited several hours to be seen for an issue that takes five or 10 minutes to address, such as a medication refill or wound evaluation that doesn’t need an intervention,” said Christopher Baugh, MD, MBA, medical director of the ED in the Department of Emergency Medicine.

When the ED is at capacity, some patients leave after being seen by a triage nurse, but before being seen by a physician. When a “walkout” occurs – often due to long wait times – it not only leads to a poor patient experience, but it is also a safety concern, as nearly 30 percent of patients who receive care in the Brigham’s ED are sick enough to be admitted.

Over the past year, a multidisciplinary team has piloted a care delivery model that reduced door-to-physician time and sustained lower ED walkout rates. The intervention centered on turning two sections of the ED known as surge areas – nonclinical spaces that were temporarily used to see patients during high-volume periods – into regularly staffed areas where patients could be seen by a physician within about 20 minutes of arrival. In addition, ED Radiology partnered with the team to flag certain imaging orders to expedite a patient’s evaluation.

Now operational and staffed every weekday during peak times, the surge spaces consist of the “front end” – a curtained-off section of the waiting room – and one hallway inside the ED, where eight stretchers are separated by opaque dividers.

Prior to the intervention, a patient who checked into the ED would be seen by a triage nurse and have their vital signs checked. If the patient wasn’t identified as critically ill and there was not an available treatment space, further care – such as lab testing, imaging or pain medication – was delayed until a room was available.

Lower-acuity patients, such as those who come in with a sore throat or sprained ankle, are now often able to be seen in the front end shortly after arrival. When in use, the area is staffed with a physician, nurse, nursing assistant and medical scribe. The area can accommodate four to five patients at a time. Most patients seen in the front end can be treated and safely discharged from there.

“It’s definitely a different way of doing things, and it’s much quicker,” said Sue Botsch, RN, an ED nurse who staffs the front end. “You’re not waiting for things to happen because the team is right here. I like that it’s a real-time application of care, and patients appreciate going home in an hour.” 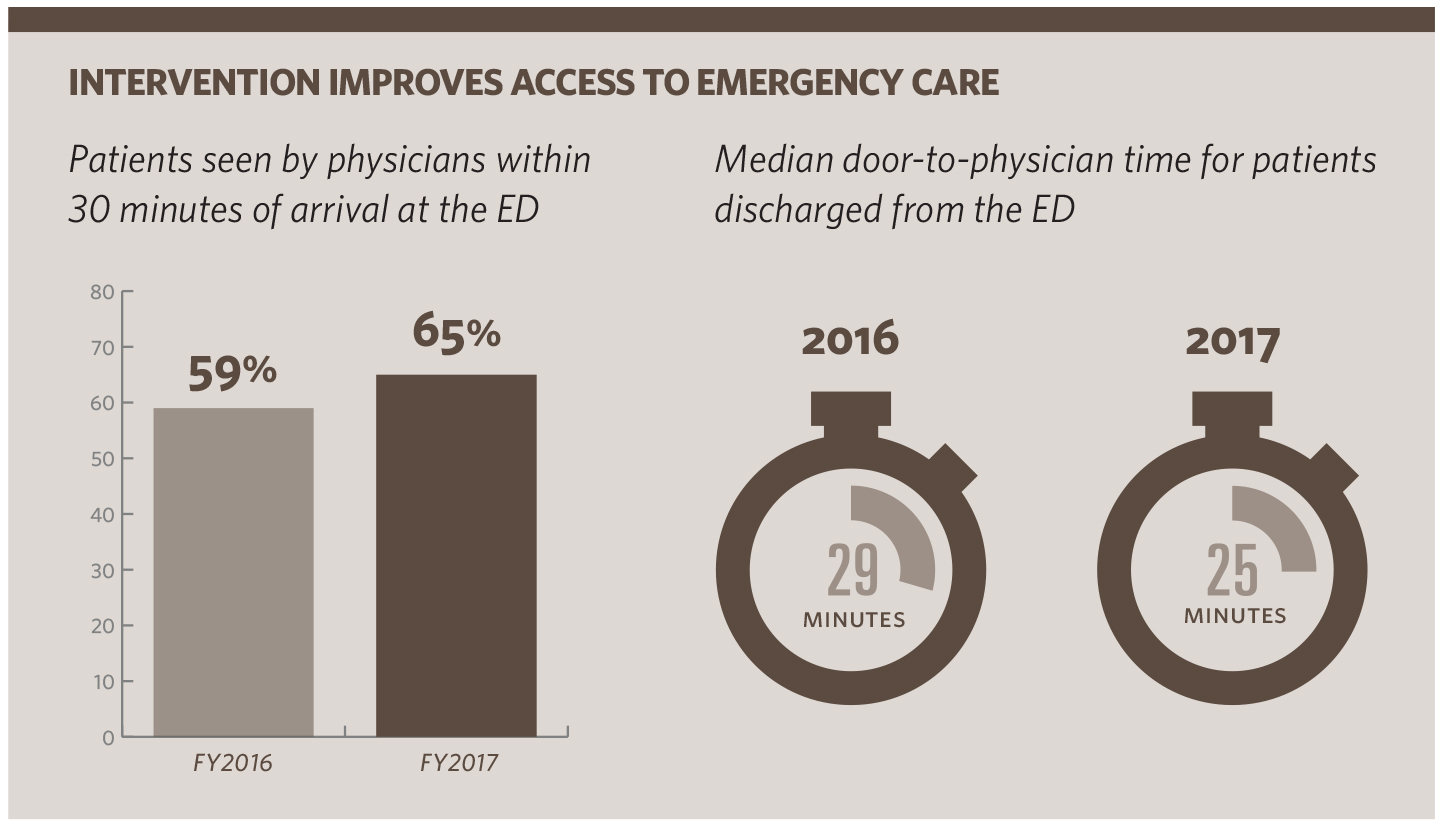 Prior to the intervention, ED walkout rates ranged from about 2.5 to 4 percent, with some individual days reaching as high as 8 or 9 percent. Since implementing the new model in December 2016, the walkout rate has consistently remained under 2 percent since January 2017, with one month as low as 0.7 percent.

“As soon as we opened this surge capacity as a regular practice every weekday, we saw the walkout rate drop dramatically and immediately,” said Jonny McCabe, BSN, RN, operations director in Emergency Medicine.

Pivotal to the initiative’s success has been a cultural change among ED staff, said Janet Gorman, MM, BSN, RN, executive director of the ED.

“We owe it to our community to be available for them, and if there’s no access, we’re doing them a disservice,” Gorman said. “I’m so proud of our staff, who truly took ownership of this work to improve how we care for our patients.”

“We definitely stepped outside our comfort zones, but everyone’s continued hard work has paid off for our patients,” Meyer said. “The sustained success shows how well we work together.”

“There is certainly a tradeoff,” he said. “Hallway and surge-area care are short-term interventions that improve patient safety by lowering our waiting room census and walkout rate. We track these metrics and share them with hospital leadership because we need everyone to understand how hospital crowding affects ED care.”

Although the upcoming ED expansion will add 30 beds and alleviate some of the current challenges, Baugh underscored the importance of taking what the team has learned from the pilot and incorporating those efficiencies into the new design.

“We have to change the way we engage with our patients – not just add more treatment rooms,” he said. “We think we can borrow from this process and continue to refine it to get even better use out of our new space.”