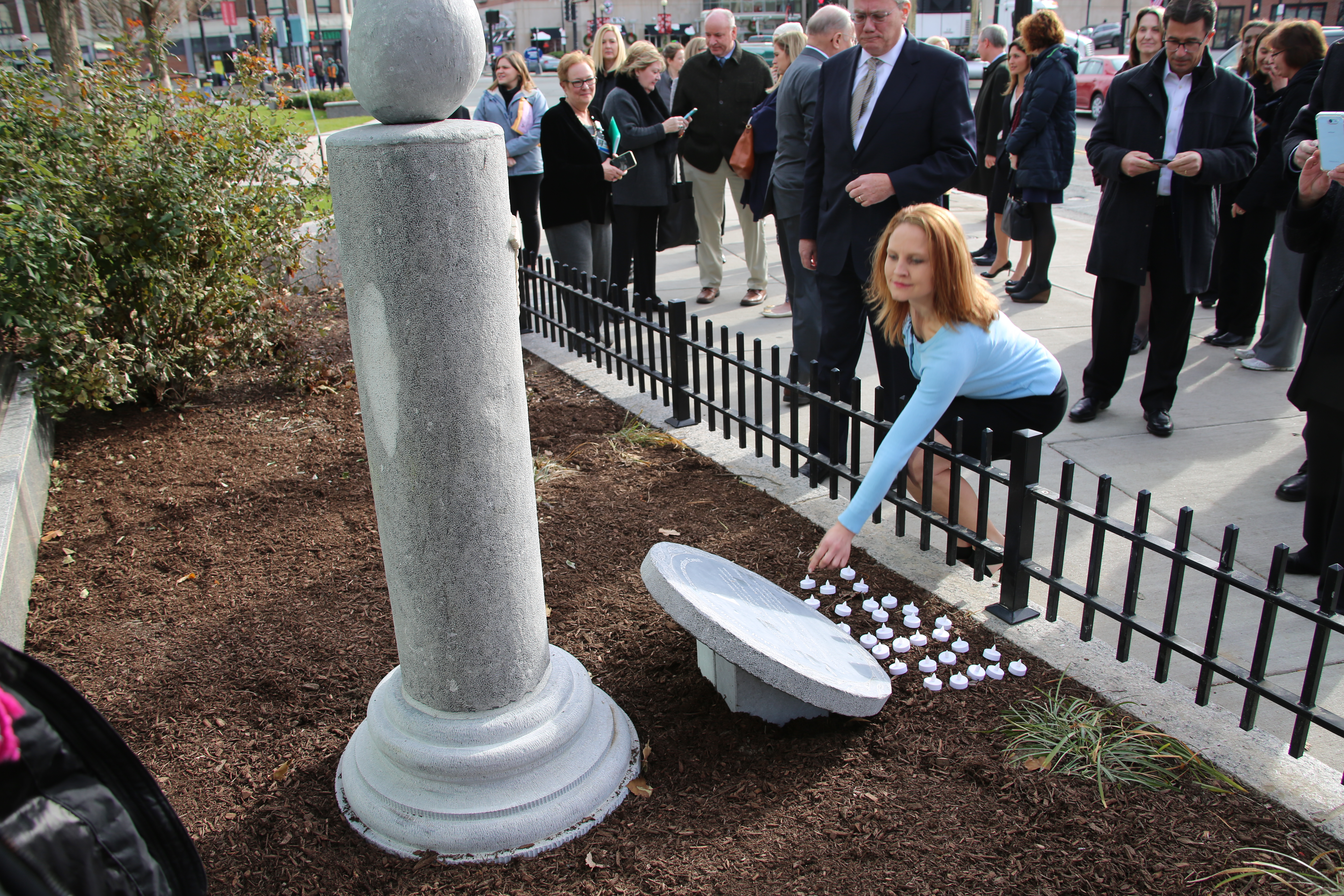 Kerrie Ike, whose brother Kevin Sullivan was an organ donor, places an LED candle in front of the new sculpture.

In honor of the Brigham’s legacy of leadership and innovation in organ transplantation, BWH was recently selected as one of five sites around the world to receive a candle monument commemorating organ donors and their families.

Donated by Boston’s Sister City of Belfast, Ireland, the Irish limestone sculpture was recently installed in front of Stoneman Centennial Park. On Nov. 30, BWHers celebrated the gift and spoke about the importance of organ donation during a ceremony with representatives from the City of Boston, Belfast, New England Donor Services (NEDS), an organ donor’s family, a BWH lung transplant recipient and other community members.

“This is a very proud moment for us,” said Brigham Health President Betsy Nabel, MD. “We are deeply honored to receive this sculpture of light, which represents hope and inspiration for all who receive the gift of life through organ donation.”

Boston and BWH accepted the sculpture as part of the first Irish-led project and global event expressing appreciation for organ donors. The event was sponsored by the Ireland-based organization Strange Boat Donor Foundation and Organ Donation and Transplant Ireland. Each sculpture was gifted by one of Ireland’s five major cities – Belfast, Cork, Derry, Dublin and Galway – to its corresponding sister city around the world. In addition to Boston, sculptures have been installed in Barcelona, Spain; Cape Town, South Africa; Melbourne, Australia; and New Delhi, India.

The sculpture stands more than 5 feet tall and is a replica of the stone-sculpted candle on display in the Circle of Life Irish National Organ Donor Commemorative Garden in Galway, Ireland. The BWH sculpture is accompanied by a stone tablet that is engraved with information about the project.

“Individuals and families choosing to help someone in need through organ donation reflect the best of humanity,” said Belfast City Councilor Adam Newton.

The Brigham is an internationally recognized leader in organ and tissue transplantation. Many transplant milestones have taken place here, including the world’s first successful human organ transplant, a kidney transplant, performed by the late Nobel Prize Laureate and transplant pioneer Dr. Joseph E. Murray in 1954.

Standing next to the glass display case in the Rotunda that holds her father’s Nobel Prize in Physiology or Medicine, Virginia “Ginny” Murray, the eldest daughter of Dr. Murray, said her father would have been thrilled to be at the celebration and so proud of the Brigham’s tremendous advances in transplantation. She encouraged more individuals to sign up to be organ donors so those in need can benefit from such advances.

“As my father once said, ‘Service to society is the rent we pay for living on this planet,’” she said. 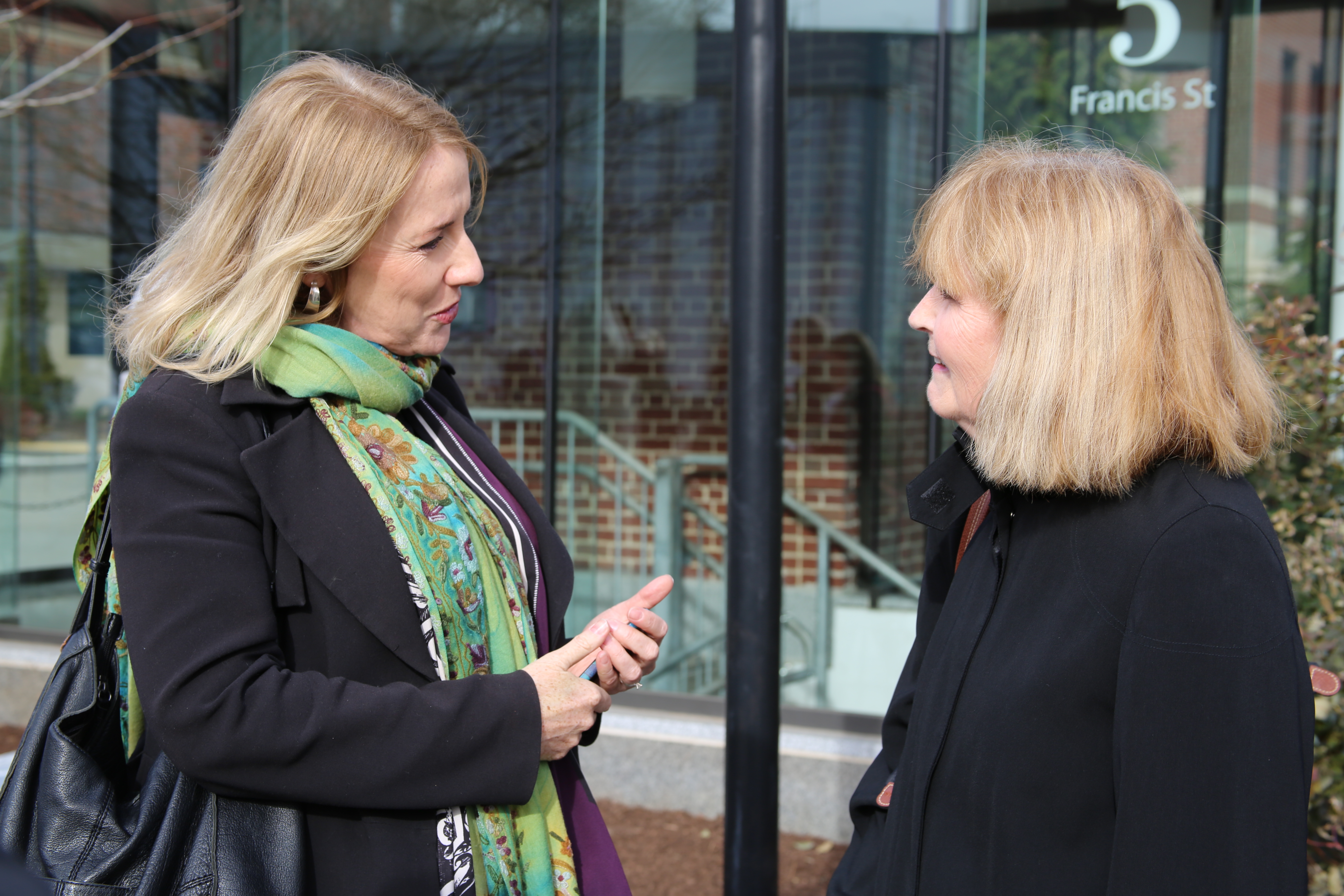 Describing the first kidney transplant as a “defining moment in medical history,” Sayeed Malek, MD, clinical director of Transplant Surgery at the Brigham, expressed his gratitude to those who have selflessly given the gift of life and urged others to help grow the ranks of organ donors.

“It is an opportunity that has no borders and embraces the whole world, as represented here today by Belfast and Boston,” he said.

Also in attendance at the ceremony was Eileen Sullivan, a BWH double-lung transplant recipient and NEDS volunteer. Sullivan said that thanks to her organ donors and the transplant team at BWH, she could be present for all of life’s greatest milestones, including watching her children grow up and celebrating her 30th wedding anniversary.

“I’m truly very grateful,” Sullivan said. “Through my volunteer work with the New England Donor Bank, I spread the message that organ donation works and it can work very well. I’m living proof of that.”

To view a gallery of photos from the celebration, click here.

One Response to “Sculpture Celebrates BWH’s Legacy of Organ Transplantation”