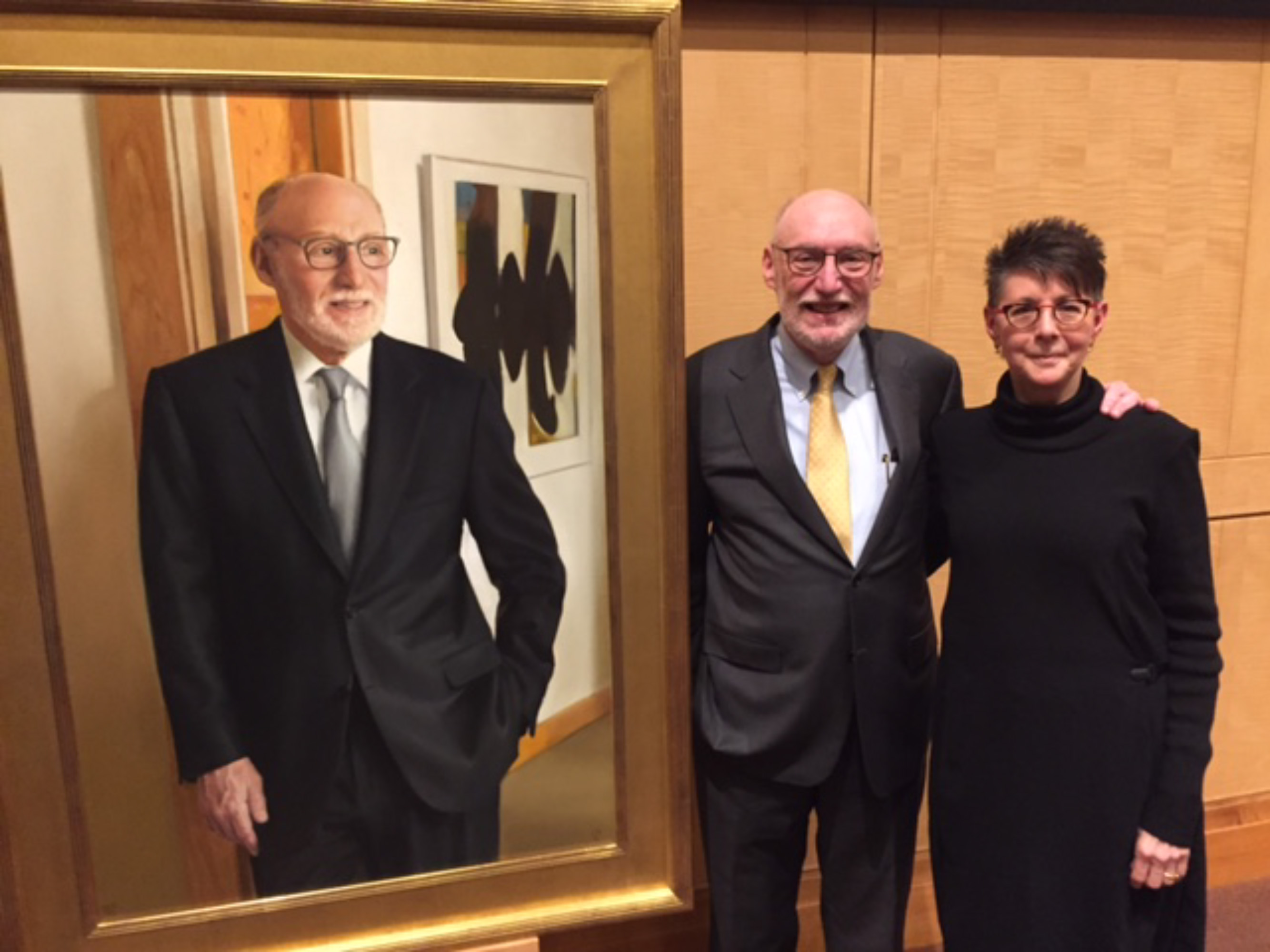 Steven and Rochelle Seltzer, with his chair portrait

Steven Seltzer, MD, FACR, chair emeritus of the Department of Radiology, has spent decades studying images of the body. But when he reflects on his 40-year career at the Brigham, it’s not the body that comes to mind but a feeling: love.

“Love is the secret sauce that makes everything possible, and I have been so fortunate and grateful to have received love in spades – from my family, from Radiology, from colleagues and leaders at BWH,” said Seltzer, also the Philip H. Cook Distinguished Professor of Radiology at Harvard Medical School. “All of this love has inspired me to be the best I can be.”

Seltzer expressed his appreciation during a ceremony celebrating the unveiling of his portrait in Bornstein Amphitheater on Nov. 17. The portrait honors his contributions in medicine, science and education as the fourth chair of the Department of Radiology, a position he held from 1997 to 2016.

Brigham Health President Betsy Nabel, MD, praised Seltzer for his exceptional leadership in Radiology by expanding the department’s clinical services and research while also serving as a beloved mentor.

“It is often said that one needs to be a triple threat, demonstrating excellence in clinical care, research and teaching. But in today’s world, you must be a quadruple threat because you also have to be good at the business of academic medicine. Steven has shined in all four of those areas in an extraordinary way,” Nabel said.

Addressing Seltzer directly, Nabel thanked him for his many years of service and devotion to the Brigham. “We are thrilled to honor you today, and we will continue to honor you for many decades to come with your portrait here in Bornstein,” she said.

Seltzer joined the Peter Bent Brigham Hospital in 1976 as a Radiology resident. Reflecting on his memories of orientation day, also held in Bornstein, he recalled how intimidated and even star-struck he felt back then.

“I own the books published by just about everyone whose portraits are on the walls and know of their enormous impact on our medicine,” he said. “I’m sure that not in my wildest dreams did I consider for a microsecond that I might spend my entire professional career at this institution and one day have my portrait take its place in this pantheon.”

During his time as chair, Seltzer expanded Radiology services throughout Brigham Health. Under his tenure, the department established the Center for Evidence-Based Imaging and the first-of-its-kind Advanced Multimodality Image Guided Operating (AMIGO) suite.

In addition to his role in the department, Seltzer also served as chair of the Board of Trustees in the Brigham and Women’s Physicians Organization. Outside of BWH, he serves as a visiting scholar in Economic Studies at the Center for Health Policy at the Brookings Institution, and has served in leadership roles in numerous radiological organizations.

“Throughout it all, I’ve admired Steven’s tremendous dedication,” said his wife, Rochelle. “I’ve seen how much he’s loved every dimension of his work, and I’ve been inspired by the many times he created a big vision for moving things forward and patiently, deftly worked until those great visions were realized.”

Caring and Dedication, at Work and Home

Just as impressive as Seltzer’s professional achievements are his warmth, humility and gentleness as a clinician, colleague and friend, said Martin Samuels, MD, DSc(hon), FAAN, MACP, FRCP, FANA, chair of the Department of Neurology and director of the Program in Interdisciplinary Neuroscience.

To illustrate how Seltzer embodies these qualities, Samuels shared a story about confiding in his longtime friend and colleague during a health scare. Following some routine bloodwork, Samuels feared the results suggested he might have pancreatic cancer. “’Let’s settle it right this minute,’” Samuels recalled Seltzer saying with tenderness and compassion.

“He took me by the hand, literally, to the CT machine, put the IV in and performed the scan,” recalled Samuels. “As soon as those films came out, he gave me the thumbs up and said there was nothing wrong. It was an incredibly important therapeutic interaction by a great doctor.”

Addressing his father directly, Seltzer’s son Daniel spoke of how he always put family first despite his many obligations.

“No matter how busy you got – no matter how many clinical cases, emails or management headaches awaited you back at the office – you skillfully shut off your work life every time you came home,” Daniel said. “Now as a father myself, I draw inspiration from my memories of how you balanced your personal and professional life, Dad. I strive to be every bit as devoted to my family you have been to me.”