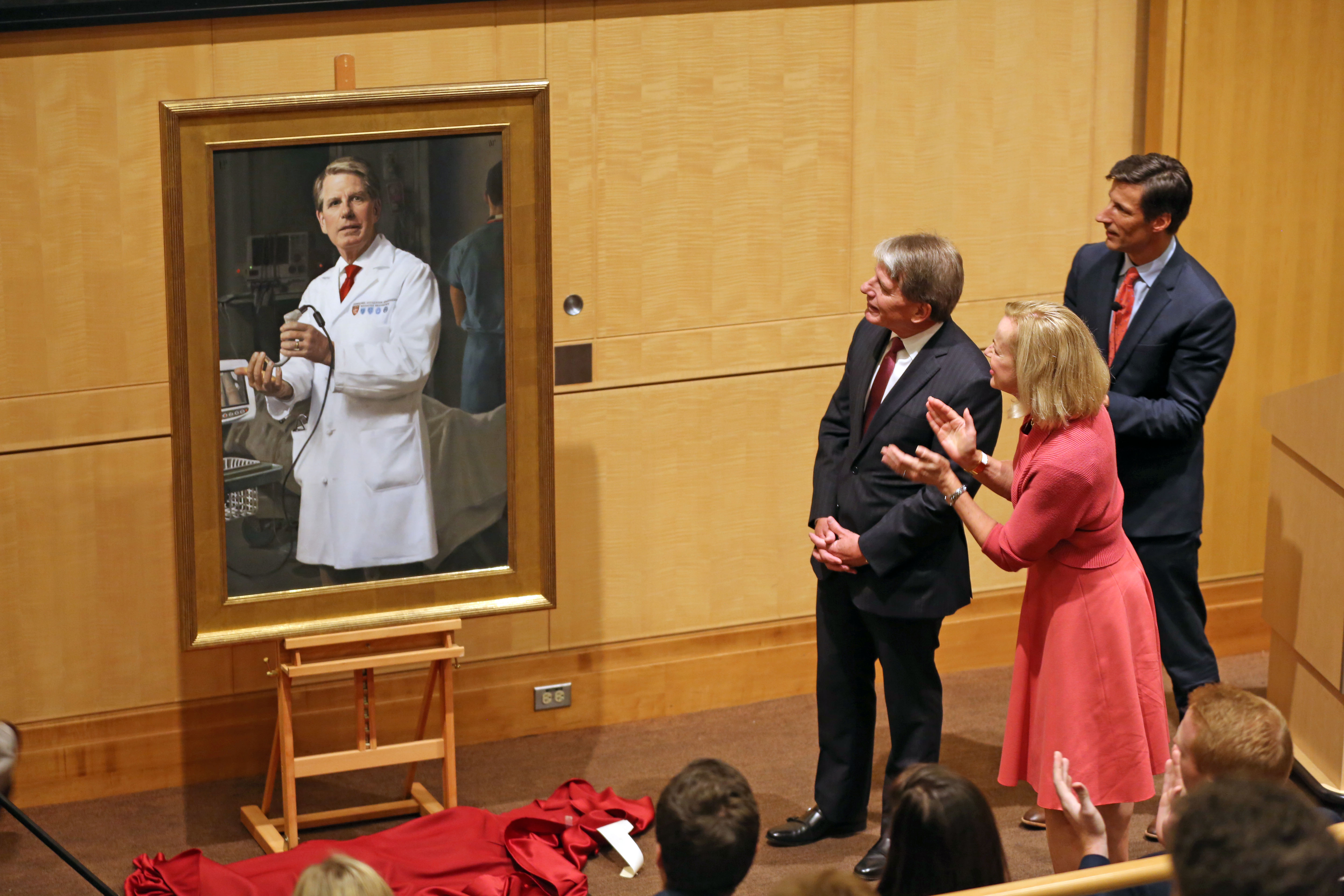 During a ceremony filled equally with warm tributes, moving dedications and lighthearted roasting, colleagues and loved ones celebrated Ron M. Walls, MD, executive vice president and chief operating officer at Brigham Health, before unveiling his portrait in Bornstein Amphitheater on Sept. 25. The portrait honors his contributions as founding chair of the Department of Emergency Medicine.

As a physician, leader and mentor, Walls has left a lasting impression on all those who have had the privilege of working with him, said Michael VanRooyen, MD, MPH, chair of Emergency Medicine.

“Ron, as your colleagues, friends and mentees from around the Brigham, the state, the nation and the world, we really admire everything you’ve done,” VanRooyen said. “You’ve done more for the field of emergency medicine than maybe anyone else has. Certainly, at the Brigham, you’ve made it what it is today.”

In 2006, he became the first emergency physician promoted to the rank of professor at Harvard Medical School (HMS) and was named the Neskey Family Professor of Emergency Medicine in 2014. Walls was appointed executive vice president and chief operating officer in 2015.

Brigham Health President Betsy Nabel, MD, thanked Walls for his commitment and vision as a member of the executive leadership team.

“Shortly after I arrived, Ron came into my office, rolled up his shirtsleeves and said, ‘I want to help make the Brigham a better place.’ I quickly saw that Ron was a man of his word,” Nabel said. “He had great ideas, but he wasn’t just an academic – he could operate, implement and get things done. I knew right away this was a partnership that would serve the Brigham very well.”

“He’s still the first person we call to share good news and the first person that we consult when times aren’t so good,” said Alexa. “Teacher, coach, mentor and leader of so many of these adventures – he means so many things to us and to our entire family. Every single bit of that was above and beyond all the professional accomplishments we’re here to honor today.”

Addressing Walls directly, Blake told his father he has been a tremendous role model for so many people.

“Dad, you have spent your whole life telling the three of us how proud you are of us, but I wanted to say we’re equally proud of you,” he said. “It’s not just the three of us up here who feel this way. It’s everyone in this room who has seen you climb, achieve and make it to the next level. We love you, and we’re so proud of you.”

“He’s always there for us. He has never said, ‘Sorry, I can’t. I have a work thing to do.’ As a doting grandfather, this continues to be true. Work can always wait. Tea parties can’t,” Andrew said. “I would bet that he was the only Harvard Medical School professor or COO in all of Boston at Chuck E. Cheese last weekend because that’s where the grandkids wanted to go.”

Turning to his father, Andrew added: “We love you, and we’re so proud of you. You are the father that I strive to be every day.”

Before the portrait’s unveiling, Walls thanked his family, colleagues, mentors and friends for their support and guidance over the years.

“Being in the same room with these great founders, pioneers of medicine, was something to which I never dared to aspire, and so I cherish it all the more,” Walls said, gesturing to the portraits of former hospital leaders that adorn Bornstein. “I wouldn’t be here today if not for the people who helped me along the way.”