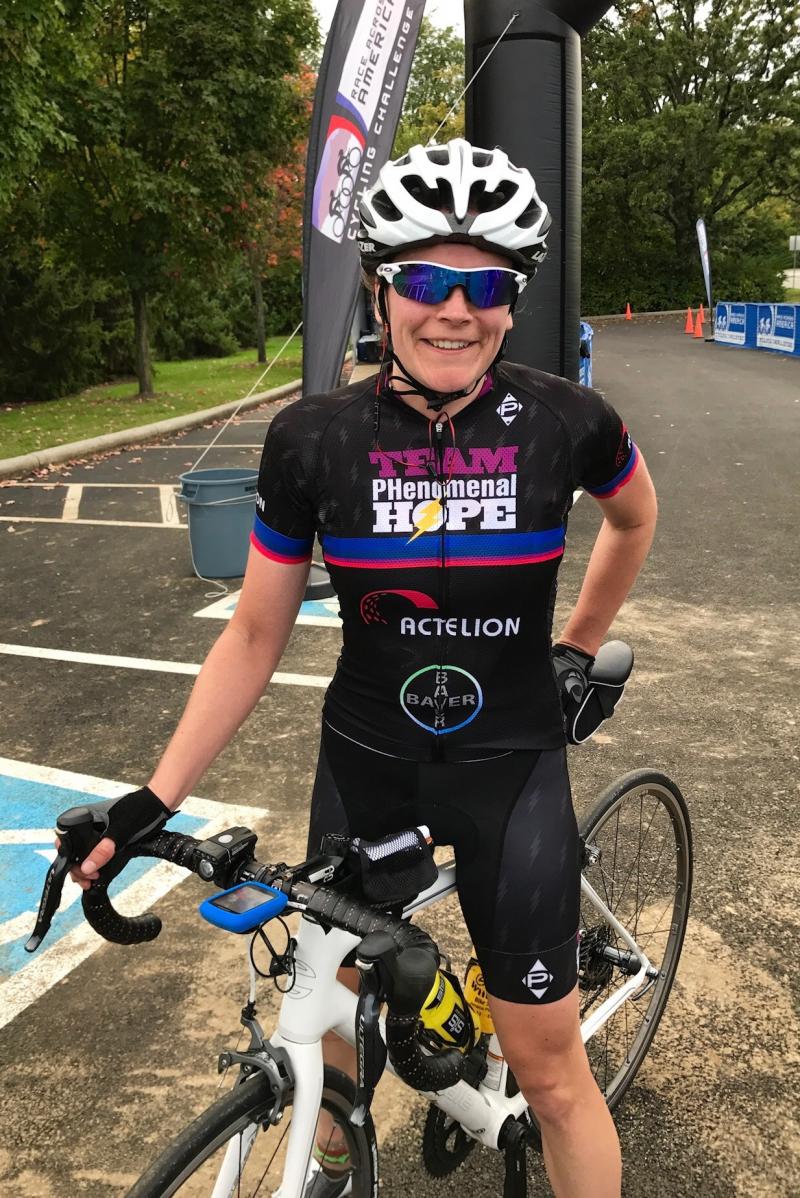 Julie Tracy at the Race Across America Ohio Challenge

After pedaling for nearly 12 hours straight, Julie Tracy, an exercise physiologist in the Division of Pulmonary and Critical Care Medicine, was elated to see her fiancé and her parents cheering for her at the finish line of a 200-mile charity cycling race in Ohio earlier this month.

Hopping off her bicycle, the longtime endurance athlete was greeted with more good news: Judges for the Race Across America Ohio Cycling Challenge informed Tracy, one of 11 cyclists this year and the only woman, that she had won second place. With a finishing time of 11 hours and 55 minutes, she had also beat the women’s record by 11 minutes.

But more than the personal accomplishments and athletic accolades, the most joyous part of the experience was racing with Team PHenomenal Hope in support of those affected by pulmonary hypertension, Tracy said. The funds she raised will go toward patient programming and research into improved treatments or a cure for pulmonary hypertension.

Pulmonary hypertension causes high blood pressure in the lungs, making the heart work harder to pump blood through the lungs and eventually the whole body. The condition has no cure and its cause is unknown. More serious cases can lead to severe health problems, including heart failure.

In her role at the Brigham, Tracy has worked closely with pulmonary hypertension patients in recent years, performing cardiopulmonary testing with the BWH Pulmonary Vascular Disease Program. Last year, she joined colleagues and several patients participating in the inaugural Boston O2 breathe Walk, a one-mile event sponsored by the Pulmonary Hypertension Association. After seeing the perseverance and optimism patients at the walk showed that day, Tracy felt compelled to do more.

“Everyday life is a lot more difficult for them, but they all finished the race and had a blast doing it,” Tracy said. “It reminded me how lucky I am and inspired me to use my racing in a positive way for our patients.”

While this was not Tracy’s first endurance event, it was by far her longest. Several years ago, she competed in an Ironman Triathlon – consisting of a 2.4-mile swim, a 112-mile bike ride and a 26.2-mile marathon. Prior to that, she competed in 100-mile rides and even one 120-mile race.

Despite the significant stamina demands for her latest ride, Tracy said her months of training paid off, as the race went smoothly. The biggest glitch that day was technical; the battery in her GPS died 15 miles from the finish line, requiring her to use her smartphone to complete the course.

Through Team PHenomenal Hope’s “Let Me Be Your Lungs” program, Tracy was also matched with a volunteer patient. Athletes race in honor of their match, and patients rally to support their athlete by providing encouragement or helping them with fundraising, according to the team’s website. Together, the duo work to raise awareness of the illness and the need for improved treatments and a cure.

Tracy was matched with a young patient living with pulmonary hypertension who had received care at BWH.

“Getting to know her was fun, and she was incredibly supportive and very thankful,” Tracy said. “Finishing this race meant a lot to both of us.”