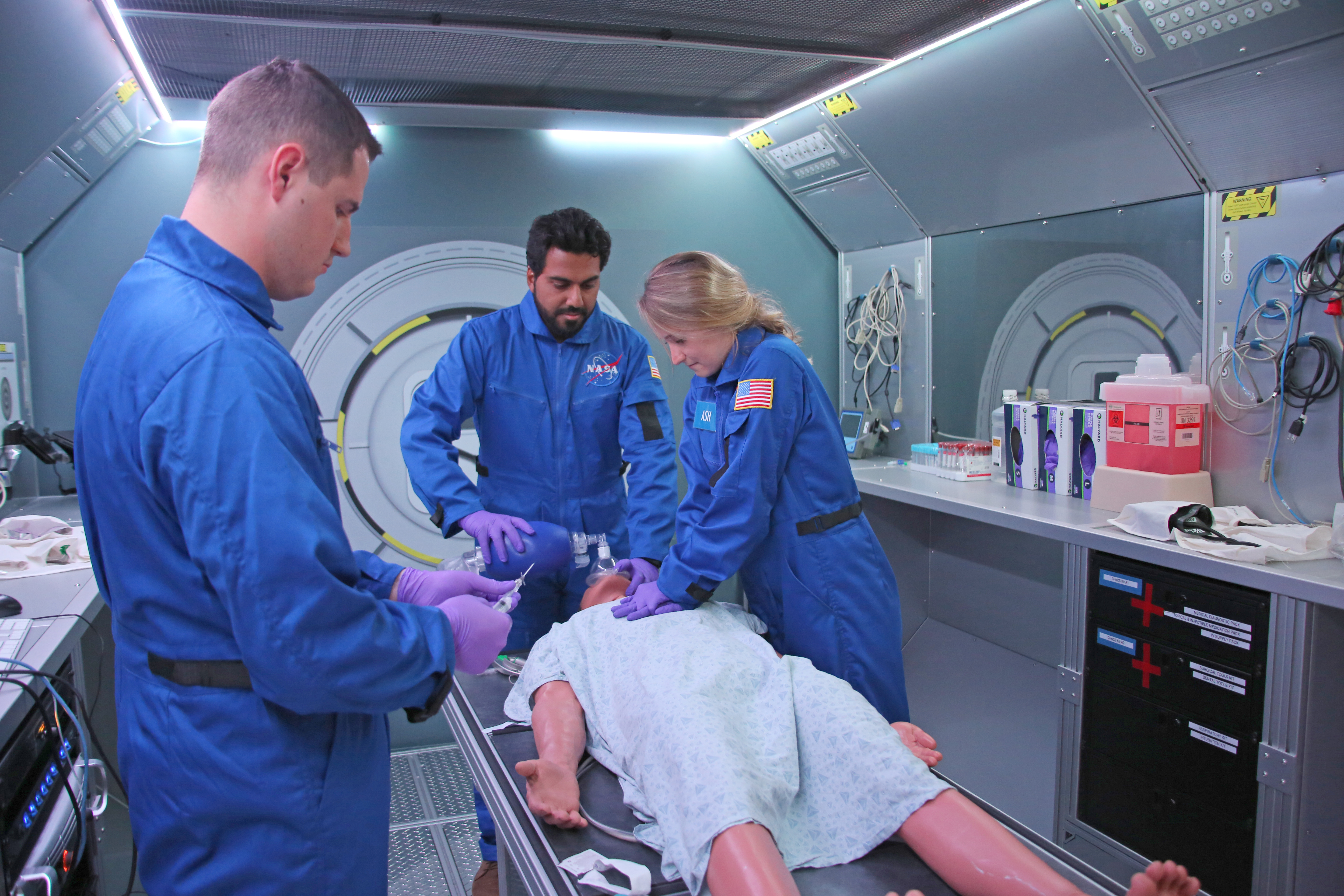 With funding and support from NASA, the Neil and Elise Wallace STRATUS Center for Medical Simulation recently collaborated with experts from McMaster University and Northern Ontario School of Medicine (NOSM) in Canada to design and construct a simulated spacecraft medical bay – a first-of-its-kind facility researchers will use to study how astronauts can best manage medical emergencies in space.

That’s one small step for man, one giant leap for health care simulation at the Brigham.

Based on the International Space Station’s (ISS) medical bay, the simulator will serve as a testbed where BWH researchers can implement a nontechnical skills training program they’ve developed for astronauts on human-exploration missions to Mars, near-Earth asteroids or the moon. The simulator was designed by Thomas Doyle, PhD, MESc, an associate professor of Electrical Engineering at McMaster.

“The most exciting part of this project is that we’ve been successful in creating an environment that mimics the medical facilities that might be available to astronauts on a long-duration mission. This allows us to create scenarios where crew members face a variety of medical emergencies,” said Jamie Robertson, PhD, MPH, assistant director of Simulation-Based Learning at STRATUS. “By studying the behavior of the team in these situations, we can identify the behaviors that might increase survival and mission success. Hopefully, this research will lay the groundwork for the training programs that will train the first Mars astronauts.”

A mission to Mars, which NASA hopes to launch in the 2030s, would take several years. That creates a very different dynamic than a five-day trip to the ISS, explained Steven Yule, PhD, director of Education and Research at STRATUS and principal investigator (PI) of the project. The longer trip makes it far more likely the crew will experience a medical emergency. In addition, there will be relatively limited supplies on board, and there may only be one or two astronauts with medical training among a crew of scientists, engineers and military service members.

These conditions are similar to those faced in remote areas during medical emergencies, which led Yule to team up with a longtime collaborator, David Musson, MD, of NOSM, who specializes in simulating medical event management in rural and remote locations and serves as co-PI of the NASA project.

“The first few minutes of a medical event can be really critical. If something occurs, the crew has to be able to deal with some of that themselves,” Yule said. “They can ask for assistance from the ground, but they’re not going to be available to immediately help.”

While BWH researchers also hope to help NASA determine the medical capabilities needed for these missions, their immediate focus will be on skills such as situation awareness, decision-making, communication, leadership and teamwork.

The interdisciplinary team at STRATUS – which also includes postdoctorate fellow Roger Dias, MD, MBA, PhD – and the Center for Surgery and Public Health, as well as experts from McMaster and NOSM, has worked with NASA for the past year. Together, they are developing a behavior observation system, training programs and checklists to teach astronauts these skills. The simulator itself allows researchers to test and document the program’s effectiveness in various scenarios. From there, BWH will help develop the nontechnical skills training programs for eventual integration with NASA’s astronaut training in Houston.

“The work that Steve, Jamie and the rest of the team have done on this important project with NASA is another indication of how much STRATUS and BWH have contributed to the growth of medical simulation and highlights the importance of nontechnical skills in the practice of medicine – even on a mission to Mars,” said Charles Pozner, MD, executive director of the STRATUS Center.

‘More Than Just a Prop’

Although it looks like a movie set, the simulator offers the most realistic environment possible for research and training, Yule said. In addition to its authentic appearance, the simulator mimics many other characteristics of a spacecraft medical bay – minus, of course, zero gravity. Alarms, lights, smoke machines and vibrations provide a greater sense of immersion for simulation participants.

Researchers themselves also look the part. Next to the simulator is a rack of NASA astronaut flight suits. Though amid all the realism, STRATUS added one fictional, but fun, detail: The name badges on the flight suits include Ash, Ripley and Brett – characters from the 1979 film Alien.

Become an ‘Astronaut’ During HUBweek

BWH is participating in HUBweek, a weeklong festival celebrating innovation in Boston. On Wednesday, Oct. 11, 3-5 p.m., all staff are invited to explore innovation at Brigham Health through an interactive scavenger hunt, which includes a stop at STRATUS’ state-of-the-art spacecraft medical bay.

Step into a flight suit and experience “blast-off.” A fellow “astronaut” will complain of chest pain and difficulty breathing. Under the guidance of a physician, you’ll respond as a team to the mock medical emergency.

The event is free to attend and open to all staff. Register and learn more here.

Learn About Simulation at Pop-up STRATUS

Celebrate Healthcare Simulation Week with the STRATUS team on Tuesday, Sept. 12, 9 a.m.-1 p.m., at an information table on the Tower 2 mezzanine and learn about medical simulation, explore skills training equipment and simulation gadgets, and get an up-close look at the manikins (patient simulators) used at STRATUS.