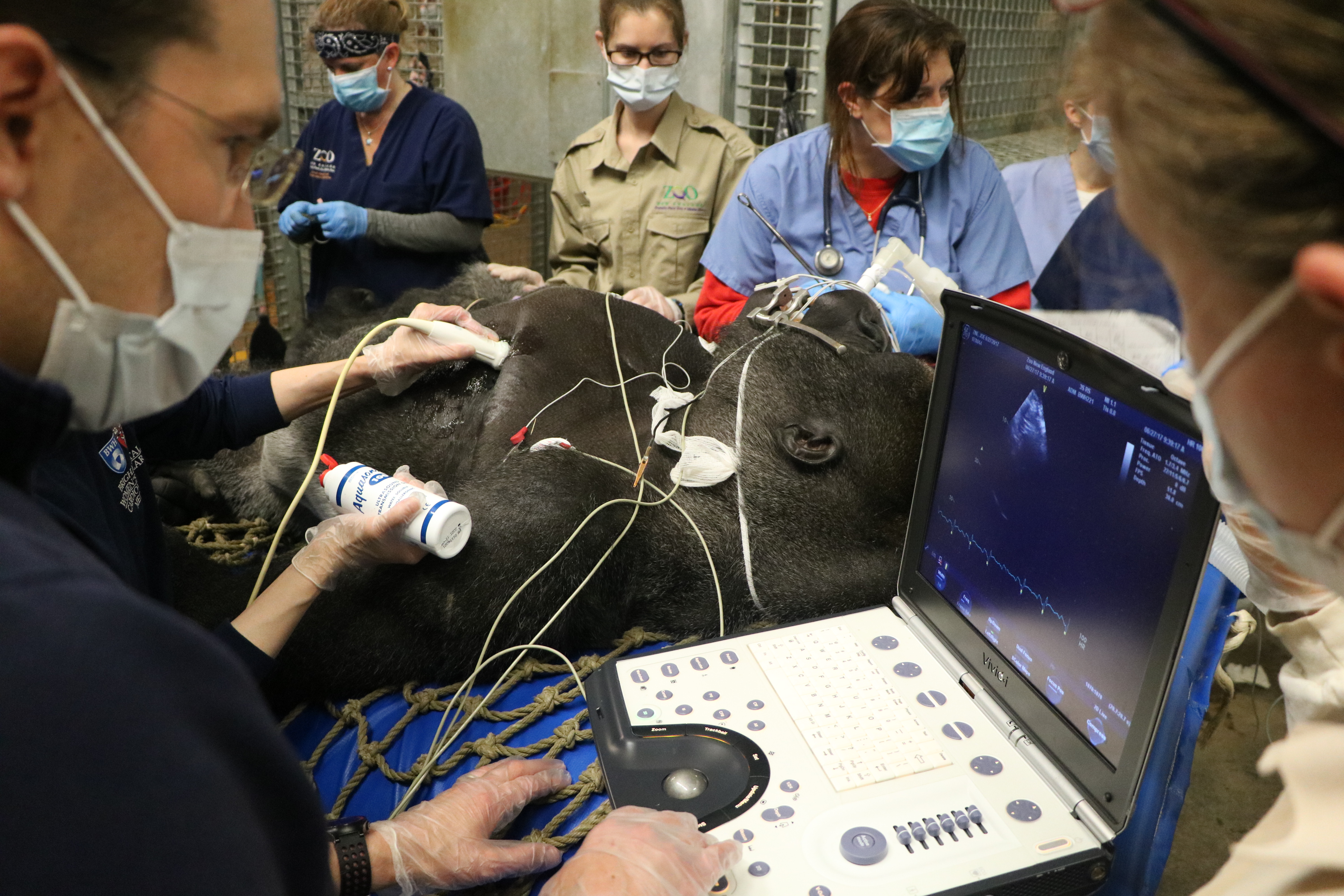 Cardiologists Brian Bergmark, MD, and Justina Wu, MD, and registered diagnostic sonographer Doriann Calisi, RDCS, recently found themselves performing a cardiac exam that was typical in many ways, but with one major difference: Their patient wasn’t a human. It was a 300-pound gorilla named “Little Joe.”

Although Little Joe was an unusual patient, Bergmark, a fellow in the Division of Cardiovascular Medicine, said attending to him was similar in many ways to caring for a human patient.

“Since gorilla hearts look nearly identical to human hearts on an echocardiogram (an ultrasound of the heart), it’s beneficial for veterinarians to have cardiologists help with these exams and study the results,” said Bergmark, who has helped the zoo with similar exams in the past. “We were there to help the zoo’s team care for their patient and acquire the data they needed to do that.”

There’s a growing effort nationwide to bridge the gap between human and veterinary medicine, says Bergmark, as both are closely related. Heart disease is a major risk factor for mortality not only in humans, but also for gorillas, orangutans and other apes, particularly males, living in captivity.

“We do suspect there is much we can learn from each other simply by taking part in these echocardiograms and thinking about how the data applies to diseases we see in human patients,” Bergmark said. “What we learn from gorillas could help humans in the future.”

According to the zoo, Little Joe, a 24-year-old, 5-foot western lowland gorilla, may be developing mild heart disease. The results received from his cardiac exam will be sent to the Atlanta-based Great Ape Heart Project (GAHP), which collects, reviews and archives echocardiograms of great apes in an international database. The project’s goal is to reduce mortality and improve the health and welfare of great apes living in captivity.

Bergmark, Calisi and Wu, who also serves as co-director of the Noninvasive Cardiac Laboratory at the Brigham, are among several BWHers who have assisted the Franklin Park Zoo with routine exams of gorillas since 2015.

Calisi, of Echocardiography, has worked with gorilla trainers at the zoo for almost two years, helping them capture ultrasound images of the gorillas’ hearts.

“It feels wonderful knowing that we are making a difference in the lives of the gorillas,” she said. “I’ve thoroughly enjoyed bonding with the gorillas and learning more about their personalities.”

Eric Baitchman, Zoo New England director of Veterinary Services, said the initial results show that Little Joe appears to be in overall good health. “This level of teamwork plays an important role in ensuring that we have the safe and smooth procedure for the animals and staff,” Baitchman said.