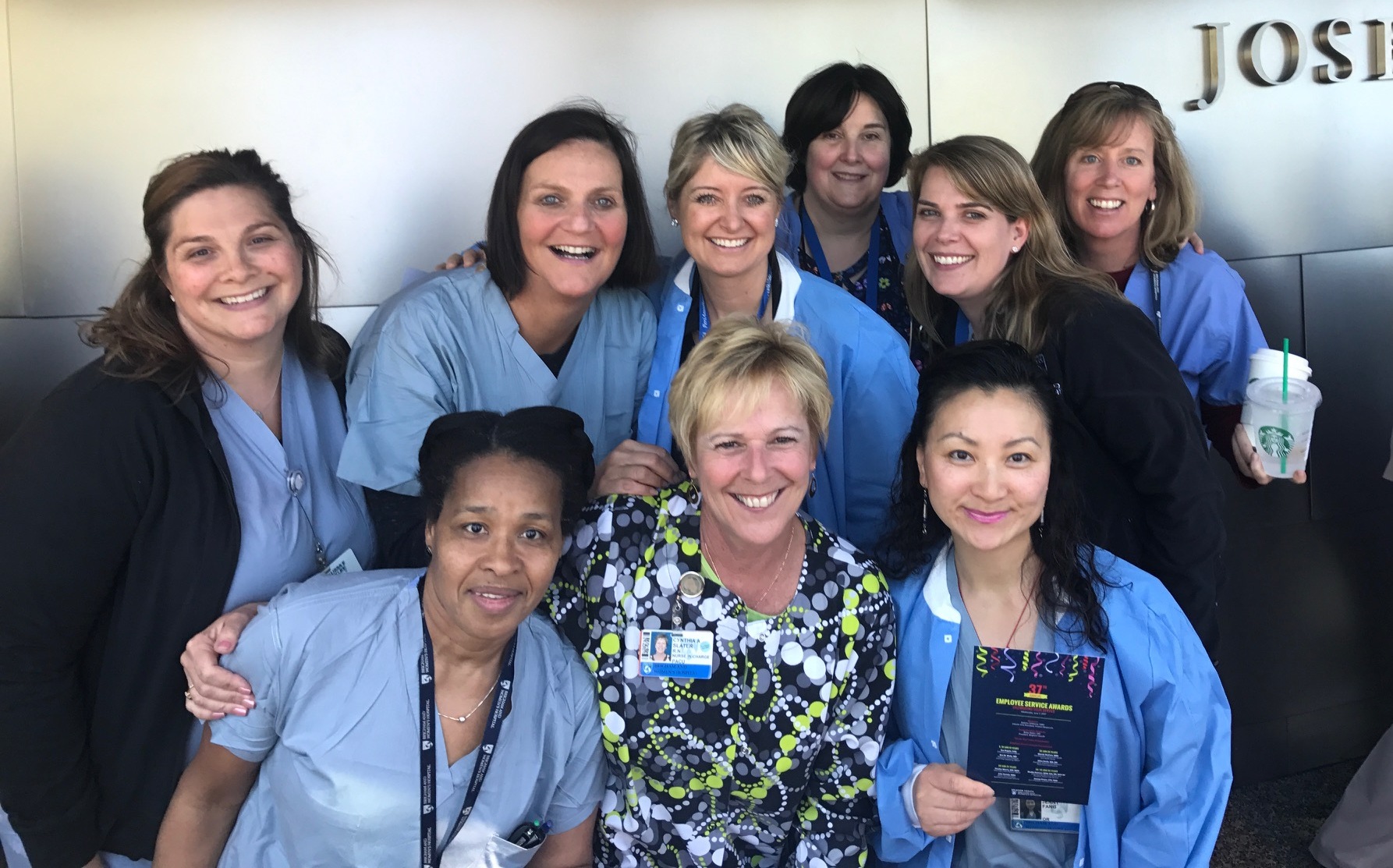 Staff from the PACU/Pre-Op/Day Surgery Unit celebrate their professional milestones at the Employee Service Awards ceremony.

Fifty years ago, colleagues Arlene Cronin and Cheryl McDonald-Spriggs were just beginning their careers at the Brigham. Reuniting at last week’s Employee Service Awards ceremony to celebrate a half-century of dedication each, they agreed that the BWH community has become an extension of their families.

“I’ve made amazing friendships that will last a lifetime,” said Cronin, a technologist in the Hematology Laboratory. “Whenever I come to work, it feels like I’m back at home. I love that feeling.”

Before the ceremony began, Cronin and McDonald-Spriggs, executive assistant to the executive director of Radiology, hugged and reminisced about some of their favorite memories, such as participating in a hospital bowling league together.

On June 7, Cronin and McDonald-Spriggs were among the hundreds of BWHers honored during the 37th annual Employee Service Awards ceremony. Attendees packed the auditorium in the Joseph B. Martin Conference Center at Harvard Medical School to celebrate the dedication and achievements of those who have worked at BWH in increments of five years, from five to 50 years.

Click here to view more photos from the event.

Hospital leaders kicked off the awards presentations by taking the audience on a trip down memory lane and recounting milestones and events that occurred at each five-year interval.

The upbeat presentation by eight leaders had the audience dancing in their seats and shaking noisemakers, especially when Executive Vice President and Chief Operating Officer Ron M. Walls, MD, and Chief Development Officer Sue Rapple swung umbrellas in the air and danced to Rihanna’s “Umbrella,” which was released when 10-year employees began at BWH in 2007.

The audience erupted in laughter when Julia Sinclair, MBA, senior vice president of Clinical Services, and Charles Morris, MD, associate chief medical officer, held up posters of singer Beyoncé and actor George Clooney while dancing to “I’m Too Sexy” by Right Said Fred, which was released 25 years ago in 1992.

BWHers with 20 years of service or more shared heartwarming, fun or little-known facts about themselves. Several honorees met their future spouse at the Brigham. Others shared hobbies, ranging from running to community theater to coaching sports. One nurse, Debra Cotto, RN, of the Department of Obstetrics and Gynecology, who is celebrating 35 years, began at BWH as a candy striper when she was 16 years old.

Brigham Health President Betsy Nabel, MD, congratulated this year’s recipients: “Your commitment, compassion and dedication are what make the Brigham one of the best hospitals in the world.”