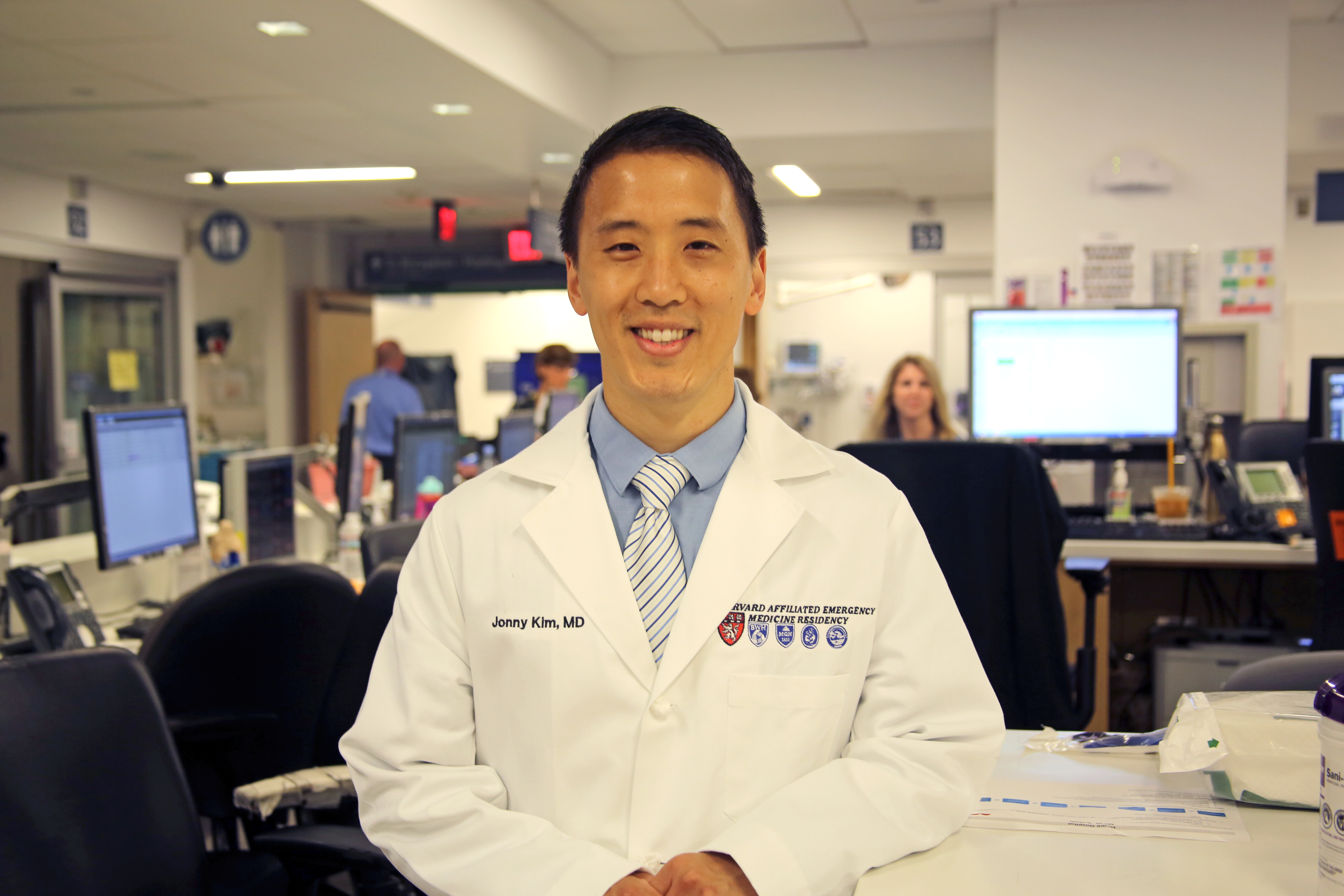 When NASA announced its newest class of astronaut recruits this month, listed among them was U.S. Navy Lt. Jonny Kim, MD, a first-year resident in the MGH-BWH Harvard Affiliated Emergency Medicine Residency program. He is one of 12 candidates chosen from more than 18,000 applicants.

Kim – a Navy SEAL who has served as a combat medic, sniper, navigator and point man on more than 100 combat operations spanning two deployments – reports for duty in Houston in August. After two years of training as an astronaut candidate, the Los Angeles native will be assigned technical duties in NASA’s Astronaut Office while awaiting a flight assignment.

“We are immensely proud of Jonny’s selection as a member of the next class of NASA astronauts. As a young physician, he has impressed us with his calm determination and compassionate care. He will be a tremendous asset to the NASA team,” said Michael VanRooyen, MD, chair of the Department of Emergency Medicine. “The entire Harvard Affiliated Emergency Medicine Residency program congratulates him and looks forward to following his next stages as an astronaut.”

Kim recently spoke with BWH Bulletin about his selection.

What does it mean to you to be chosen as a candidate?

JK: It makes me so appreciative, humbled and honored to be an American. This is really the land of the free, where people make their dreams come true, and it kind of comes full circle for me on a personal level because this opportunity is my biggest dream of all.

I had a modest upbringing. My parents were immigrants from South Korea, and they came to this country for a better future for their children. I had big dreams like a lot of kids, but I didn’t have a lot of confidence. Joining the Navy was the best decision I made because it really defined my identity and helped me build that confidence. I wish my younger self could see where he was heading, but I hope now I can show kids that anything in life is possible. I want to inspire them to dream about tomorrow and imagine a better world. I can’t think of a better opportunity than to do that with NASA.

What made you want to become an astronaut?

JK: Many kids grow up dreaming of becoming an astronaut, but that wasn’t the case for me. I joined the Navy at 18 and, based on my experiences in the military, was inspired to pursue a career in medicine, which I’m still very passionate about.

Later, I had the opportunity to meet astronaut Scott Parazynski. I fell in love with the idea of exploring the space frontier, going into the unknown, developing new technologies to tackle the impossible and bringing those discoveries back to Earth to enrich everyone’s lives. But the most alluring aspect is the prospect of emboldening our children to dream and achieve the impossible.

“I want to inspire kids to dream about tomorrow and imagine a better world.”

Does this mean you’re leaving medicine?

JK: Although there are no concrete plans in place, I am hopeful I will have an opportunity to finish my training in emergency medicine. As an astronaut, those skills are crucial if there’s a medical emergency during a mission.

How did you find out you were selected?

JK: I was grocery shopping with my wife when I got the call. I was trying not to lose my cool in public, but my wife and I started jumping and cheering. It was an amazing moment.

As applicants, we were told that we would receive notice of “yes” or “no” by a certain date, but the days leading up to that were so nerve-wracking. It was like Match Day but more intense because this is the greatest dream I’ve ever had.

How might residency training help you with life in space?

JK: Surprisingly, there are several parallels. As an intern in emergency medicine, I work on small teams, oftentimes with people I’ve never met. We try to function as a cohesive unit with a singular mission: caring for very sick patients. In that environment, you’re also working with limited information. You don’t have all the facts, the data is coming in piecemeal, and you have to use what you know to make the best, evidence-based medical decision.

A lot of that overlaps with being in space. You work in small teams in an environment that we don’t fully understand, and you’re making decisions that could impact people’s lives in a profound way. A lot of the skills I practiced here will help prepare me to become an astronaut.