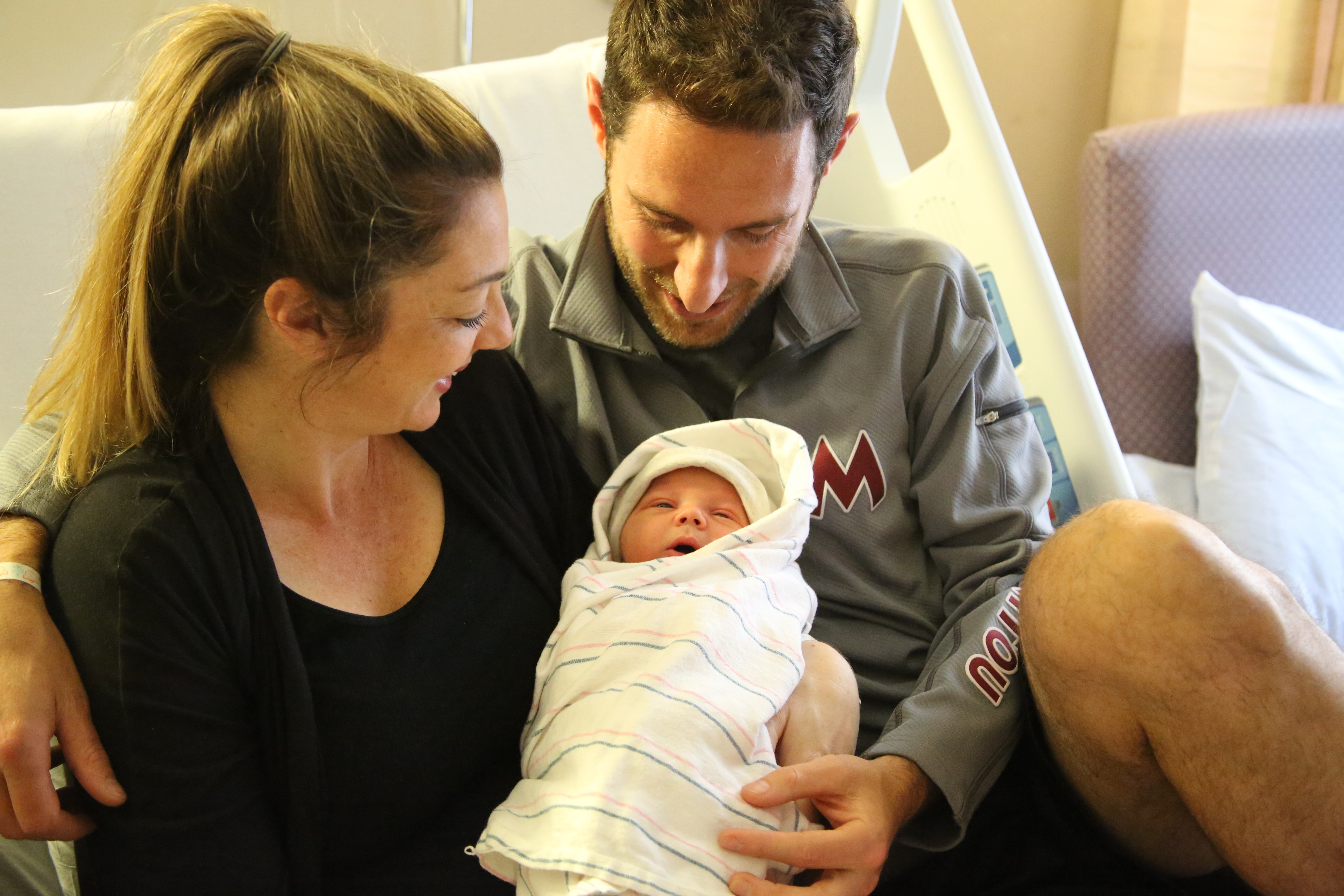 Rachel and Jason Miller had an extra special reason to celebrate the birth of their first child, Greyson, when he arrived two days early on May 14 – just in time for Mother’s Day.

Rocking Greyson in her arms in the Connors Center for Women and Newborns on Monday, Rachel described the process of giving birth as tiring but magical.

“Life has changed in ways we never could have imagined,” Rachel said with a wide smile. “We can’t stop staring at Greyson.”

Sitting with Rachel on her hospital bed, Jason said he felt as if he was in a “dreamland” with his family of three.

“It’s fitting that a first-time mom got such a special gift on Mother’s Day,” Jason said. “I’m incredibly proud of her. Every day will be Mother’s Day in our house.”

When Rachel went into labor, she called her mother, Nancy Presseau, to give her an update. Presseau, who lives in California, took a red-eye flight and arrived at the Brigham an hour before Greyson, her first grandchild, was born.

The day was especially heartwarming for Nancy because she was also born on Mother’s Day.

“Before I booked my ticket, I was running in circles around my house because I was so excited,” Nancy said. “I couldn’t wait to hold Greyson in my arms for the first time. It’s a feeling you can’t describe.”

Both Rachel and Jason praised the teams who cared for Rachel and Greyson. Every time a new care provider walked into the room, Jason would make a note of their name in his phone so he could remember to thank each of them personally.

“Everyone has been awesome,” Jason said. “Rachel, Greyson and I appreciate everything they are doing for us.”

After coming to the hospital twice on Saturday believing she was in labor – only to learn that both events were false alarms – Danielle Garlinger knew the next morning was the real deal when her contractions began. She was ready to deliver her baby.

Upon arriving at the Brigham’s main entrance around 6:40 a.m. on Mother’s Day, she was wheeled into the hospital and, within five minutes, was introduced to her new baby girl, Charlotte.

“I still can’t believe she’s here,” said Garlinger, a senior revenue analyst in the Brigham and Women’s Physicians Organization. “Charlotte arrived with quite a little kick.”

This is Garlinger’s third child. Due on May 30, she said it was clear Charlotte didn’t want to wait another second to make her entrance to the world.

Garlinger said delivering her daughter on Mother’s Day was a wonderful surprise, and she looks forward to sharing the story with Charlotte when she’s older.