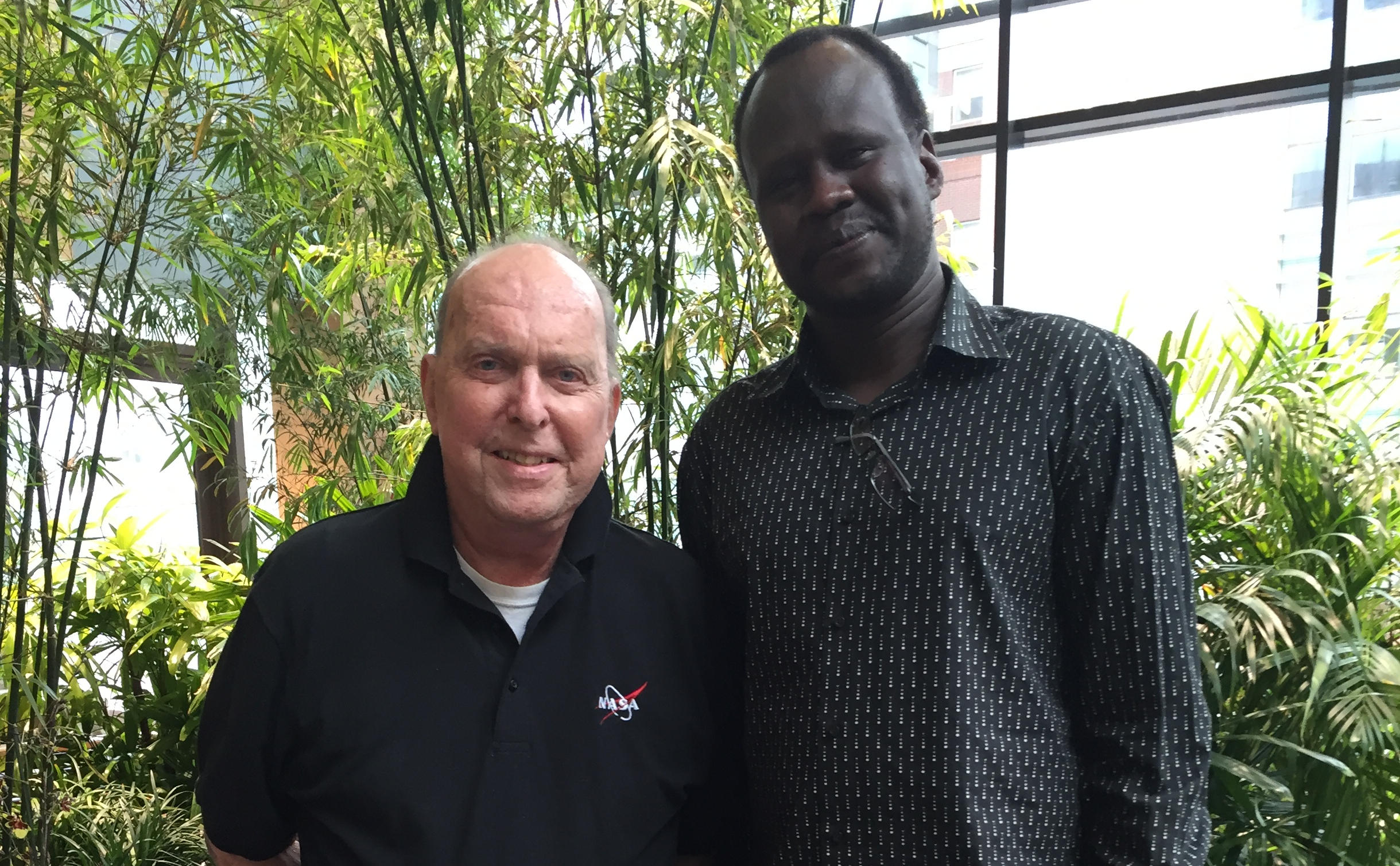 Panther Mayen, a personal care assistant (PCA) in the Dana-Farber/Brigham and Women’s Cancer Center, never imagined that one of his patients would end up helping him recover from the trauma of his childhood.

Thirty years ago, at the age of 6, Mayen was one of 20,000 children forced to run for his life during Sudan’s civil war. These children became known as the “Lost Boys of Sudan.”

By the age of 7, Mayen had already endured so much tragedy and heartache. In addition to leaving behind his family and home, he had to bury a childhood friend.

“For four years, I was running to escape the violence and sadness,” Mayen said. “I dodged bullets and bombs and saw things that no child should ever have to see. I spent a good part of my life without food and water. Every day I would cry because I missed my family.”

When Brigham patient David Reed heard Mayen’s story, the retiree from Concord, Mass., encouraged Mayen to share it. Together, they composed Mayen’s autobiography, Escaping Nightmares, Living Dreams: A True Story of One of The Lost Boys of Sudan, which was published on April 7.

In 1992, after walking more than 900 miles barefoot, Mayen made it to one of the world’s largest refugee camps in Kenya. He would remain there for nine agonizing years, until he was selected for resettlement in Boston in June 2001.

As a refugee in Kenya, Mayen worked as a medical assistant helping doctors and nurses in the camp. He received his PCA certification after coming to the U.S. and was hired by BWH in 2002.

Mayen says he’s thankful for all of the opportunities he’s been given in the U.S. While it has been difficult trying to move past what he describes as “the nightmares of his childhood,” Mayen feels blessed to be in a better place today.

A Story That ‘Needed to be Told’

It was early last year when Reed, who was at the Brigham for a week following a stem cell transplant, met Mayen. The transplant helped Reed restore healthy bone marrow after receiving treatment for leukemia.

Mayen, who works the night shift, watched over Reed each evening. He would check Reed’s vitals and take him on short walks around the unit.

During their walks, the two men would make small talk. At one point, Reed asked Mayen if he was comfortable sharing more about his life. Reed started out by asking Mayen where he was from.

“He said he was from Sudan,” Reed said. “In the maybe 30 minutes in total that I spent with him throughout that week, I heard bits and pieces of Panther’s story and was totally overwhelmed. I suggested to him that his story needed to be told and published.”

Reed remembers not being able to sleep the night he heard Mayen’s story: “I felt as if I had this big weight on my chest. My heart was racing. I knew I had to help Panther tell his story.”

At first, Mayen was hesitant to proceed with a book based on journals he kept since childhood. He worried Reed wouldn’t be able to read his handwriting and understand what he was trying to say, as English isn’t his first language. But after thinking more about it, Mayen realized that sharing his story would help him heal.

With Mayen’s permission, Reed and his wife, Florence, went through Mayen’s journals and worked to transcribe his memories and stories into a 165-page book.

“David and Florence, whom I call ‘Mom’ and ‘Dad,’ motivated and encouraged me to share my story,” Mayen said. “It wasn’t always easy reliving my past throughout this process, but I thank them for dedicating their time to helping me make this book a reality.”

‘My Heart Is Healing, Piece by Piece’

Holding the published book in his hand for the first time earlier this year was a gratifying feeling, Mayen said. The process helped him heal and recover from the trauma he endured for so many years. He hopes the book will help educate people around the world about the Lost Boys of Sudan.

Mayen has already sent several copies of the book to his village in South Sudan. He is hoping to go back soon to talk with schoolchildren there about his experiences.

Recently, Reed helped Mayan to create an audio recording of his autobiography in his native language, Dinka, to share with his family and schoolchildren in South Sudan.

“I’m so glad I did this,” Mayen said. “I was able to let my raw emotions out and give readers a real look into what I, and so many other children, experienced during the war. Because of this book, my heart is healing, piece by piece.”

Proceeds from the book, available on Amazon.com, go to schoolchildren in South Sudan.

11 Responses to “Healing Together: Patient and Brigham PCA Publish Memoir”