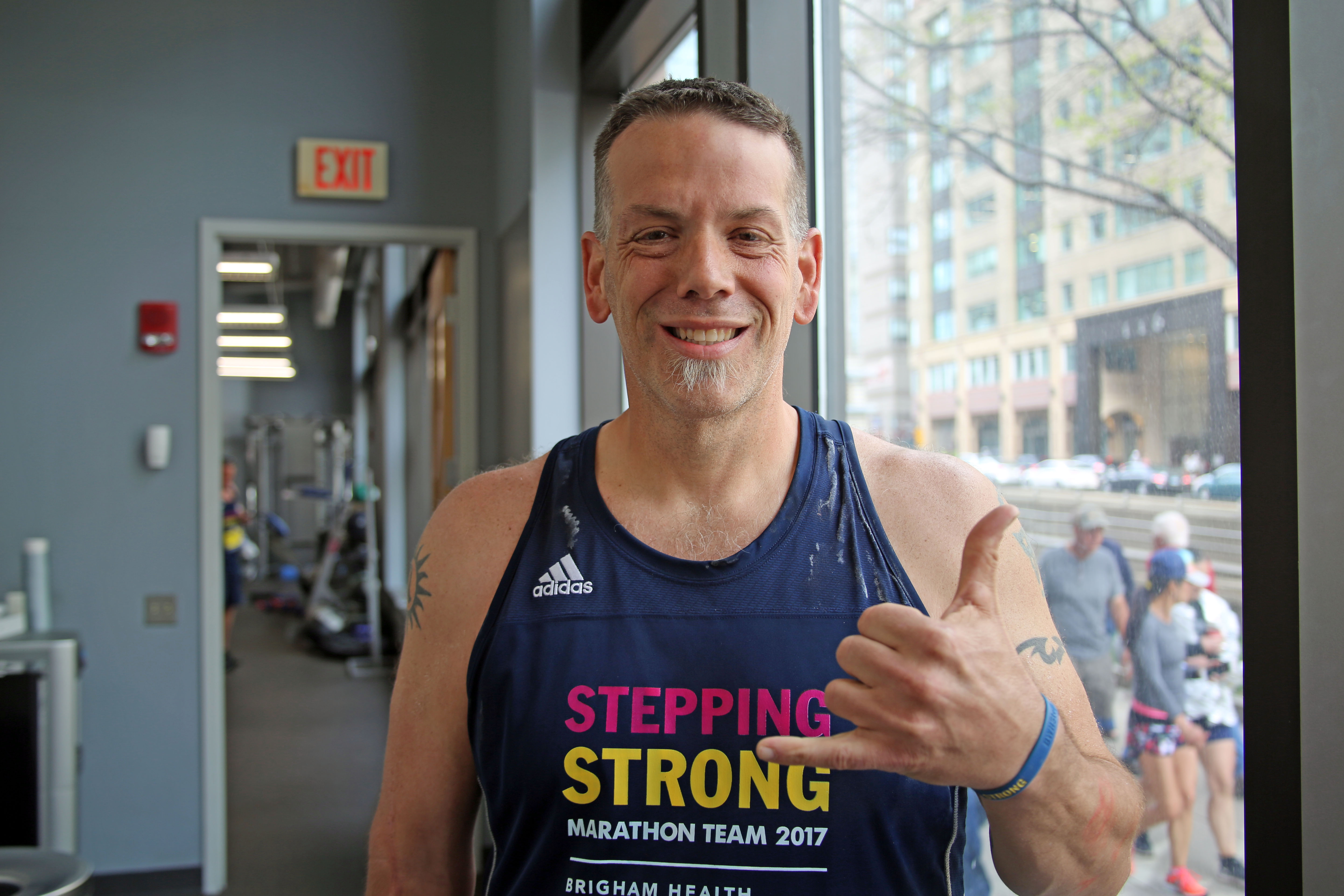 Stephen Teague’s life changed forever in 1993 when his right arm got caught in a piece of machinery at work. The accident caused a traumatic injury that resulted in the loss of several fingers, as well as significant nerve, tendon and muscle damage.

He was brought to the Brigham, where he underwent multiple surgeries over the course of two months, setting him on the path to recovery. When he made the decision to run the 2016 Boston Marathon – and again this year – he knew there was no better fit than BWH’s Stepping Strong Marathon Team. Funds raised for the team support the advancement of trauma research and care.

“When they called and said they wanted me on the team, I knew it was meant to be,” said Teague, 44, a public works employee for the Town of Canton, speaking after he completed his second Boston Marathon on April 17. “I had thought, ‘This is a no brainer.’”

This year, 132 runners participated in the 121st Boston Marathon on behalf of the Brigham – driven by their desire to help others and in recognition of BWH caregivers, researchers and other staff who make life better for patients and families. While most ran with Stepping Strong, others did so in support of the Michael J. Davidson, MD, Endovascular Fellowship, the A.J. Trustey Epilepsy Research Fund, the NICU, global health and more.

Teague, who was honored earlier this month by the Boston Celtics through its Heroes Among Us program, said he felt privileged to “pay it forward” for the compassionate, expert care he received as a BWH patient years ago and the kindness he still experiences here today.

When Teague attended an event earlier this year celebrating The Gillian Reny Stepping Strong Center for Trauma Innovation, he recognized a familiar face in the crowd. It was his doctor, Dennis Orgill, MD, PhD, medical director of BWH’s Wound Care Center and a Stepping Strong Research Scholar, who remembered Teague from 24 years ago. The brief interaction nearly moved Teague to tears, he said, and further strengthened his resolve to support Stepping Strong’s mission and work.

“Each one of our team members brings a deep-seated commitment to training for the marathon and helping those in need, and we want to express our heartfelt gratitude for their efforts,” said Brigham Health President Betsy Nabel, MD. “Together, they’re fueling our mission by raising more than $1 million – a truly outstanding achievement.”

‘The Essence of Boston Strong’

Rachel Bliss, 21, a Cambridge native and student at Colgate University, ran with Stepping Strong this year. Throughout the race, Bliss reflected on BWH patients who had shared their stories during a pasta dinner held for the team on Sunday night. Those speakers included Gillian Reny, who was injured during the 2013 Boston Marathon bombings, and Will Lautzenheiser, who received a double-arm transplant in 2014 after a bacterial infection resulted in the loss of all four of his limbs.

“It was tough to see Gillian get hurt, but it was amazing to see her recovery and what the Renys did with a tragic incident,” said Bliss, who went to high school with Reny. “What really speaks to me is their motto, ‘turning tragedy into hope,’ and I think that really captures the essence of Boston Strong.”

Fellow Stepping Strong teammate Amy Michaud, 39, of Walpole, N.H., also felt a personal connection to the group’s mission.
“I’ve been in a situation where I couldn’t run before, so today I ran for everybody who can’t,” Michaud said. “It was an honor to fundraise for a cause that will help people hopefully get back on their feet again and step strong.”

Despite the challenges of the 26.2-mile route on a warm spring day, BWH runners said energizing crowds and solidarity with their teammates kept their spirits high from Hopkinton to Copley Square.

“It was really special to catch up to other Stepping Strong runners and have that time to run together and share that experience,” said Barlow Keener, 60, an attorney from Brookline. “It’s an extremely emotional time, I just cried and cried coming through the tunnel. I think we all had that feeling that we were running as one.”