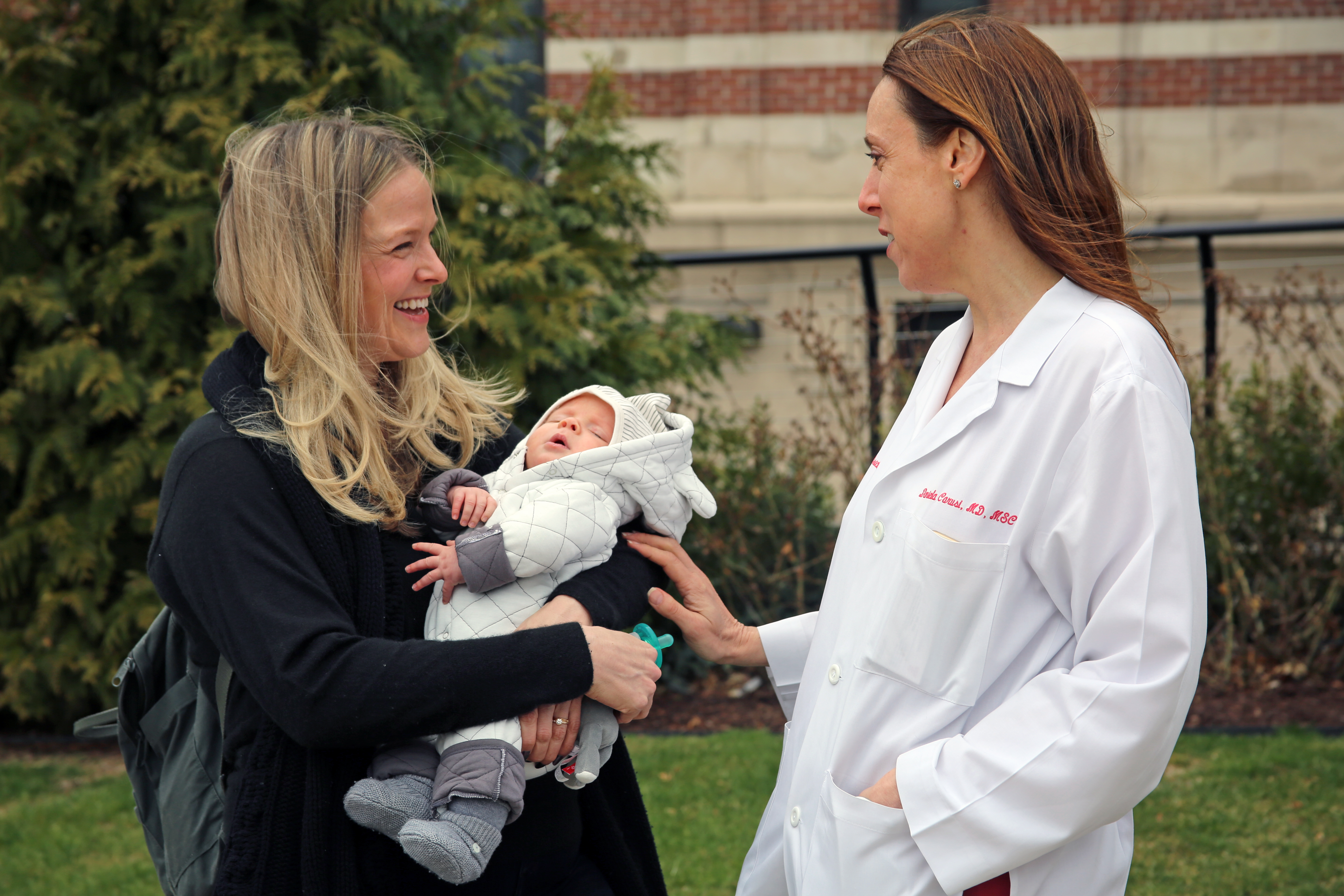 From left: Frannie Carr Toth and her son, Michael, reunite with obstetrician Daniela Carusi, who delivered Michael at BWH.

Following an ultrasound appointment 24 weeks into her second pregnancy, Frannie Carr Toth tried to process the information she just received: a diagnosis of placenta accreta, a rare but serious condition that occurs when the placenta embeds too deeply in the uterine wall. The complication carries a high risk of severe bleeding during delivery.

Carr Toth was closely monitored throughout the rest of her pregnancy by her obstetrician, Daniela Carusi, MD, MSc, of the Department of Obstetrics and Gynecology, and a multidisciplinary care team at the Brigham. However, the severity of the accreta – that is, how deeply embedded the placenta was – would not be known until the baby was born.

“It was really scary. I was worried about my life and my baby’s life,” Carr Toth said.

After experiencing several episodes of bleeding shortly before her scheduled caesarean section, she lost half of her body’s blood volume during delivery. But thanks to a lifesaving surgery, expert care and the well-stocked blood bank at BWH, Carr Toth and baby Michael are now healthy and at home with their loved ones.

“I put so much of the credit on Dr. Carusi and the team’s shoulders, but also among the big heroes in this story are the nameless donors who took it upon themselves to give blood, and I wish I could personally thank them,” Carr Toth said.

Placenta accreta affects about one in 500 pregnancies in the U.S., and it is more likely to occur in women who have had a prior C-section or uterine surgery, said Carusi, who specializes in treating mothers with the condition. During childbirth, the placenta typically separates from the uterus. In patients with placenta accreta, there is a high risk of severe bleeding when the placenta cannot detach. A C-section is required to deliver the baby safely; even so, mothers can still experience life-threatening blood loss.

“Pregnancy and delivery, which is usually such a normal and exciting time, can be very dangerous for some women,” Carusi said. “Having providers who are trained to take care of this – and having blood banks that are ready to respond – are really essential to keeping mothers safe.”

Blood banks nationwide have faced a blood shortage since last May, said Malissa Lichtenwalter, supervisor for donor recruitment at the Kraft Center. Drives like the one held for accreta awareness and individual donations are vital to keeping BWH’s blood bank stocked, she said.

Carr Toth noted another reason she feels grateful to receive care at BWH. Although placenta accreta results in a hysterectomy for most women, Carr Toth’s C-section was performed using a novel technique called “hybrid surgery” that enables some patients, including her, to avoid a hysterectomy. In this collaborative procedure, interventional radiologists embolize – that is, temporarily block – blood flow to the uterus as soon as the baby is delivered.

“I knew that it might not work out, but I wanted to try,” Carr Toth said. “I put my trust in the team, and we emerged from this worst-case scenario with best-case outcomes.”

Carr Toth said her overall experience as a Brigham patient has reinforced that she and her family came to the safest, most compassionate place to receive care.

“I felt like I was given all the information I needed and empathetic, wonderful care,” she said. “When I needed to be admitted, everybody from triage to labor and delivery to the antepartum floor just made me feel so well taken care of.”