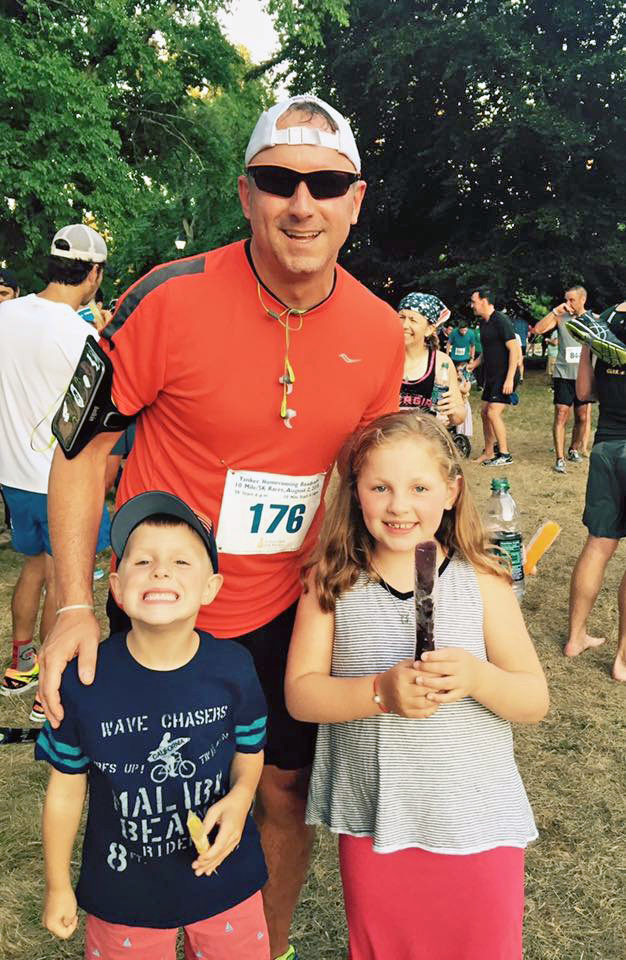 Mark Bonner (center), with his children, Ryder and Ella, after a race in Newburyport in 2016

This is the fourth installment in a weekly series profiling runners participating in this year’s Boston Marathon on behalf of BWH.

Whether Mark Bonner is pounding the pavement, hitting the trails or logging miles on the treadmill, the feeling he gets when running is one that affirms he can accomplish great things in life.

Later this month, Bonner, of Rowley, Mass., will participate in his first Boston Marathon with BWH’s Stepping Strong Marathon Team. He’ll be running in honor of his late father, Gary, who was treated at the Brigham in 2011, as well as Gillian Reny, a 2013 Boston Marathon bombing survivor who received lifesaving care at BWH after the bombings. Last year, she and her family established The Gillian Reny Stepping Strong Center for Trauma Innovation at the Brigham to advance trauma care.

“Running motivates me to be the best person I can be,” said Bonner. “While I’ve run several marathons in the past, running the Boston Marathon has been a long-time dream of mine.”

In 2011, Bonner’s father passed away at the age of 62 from mesenteric ischemia, a rare disease that causes inadequate blood flow to the small intestine. He spent several weeks in intensive care at the Brigham. While losing his father was one of the toughest things he’s ever had to face, Bonner said the people at BWH truly helped him and his family get though the painful experience.

“From my dad’s care team to staff working in the gift shop and cafe, it was the Brigham community that helped my family and I get through this difficult time,” Bonner said. “They were not only professional in every aspect of their jobs, but extremely kind, compassionate, understanding and caring. I promised that if I was ever given an opportunity to pay it forward to BWH, I would take it. This is my time.”

An avid runner for the past seven years, Bonner has completed marathons in Philadelphia and Hartford, as well as many 5K and 10K races and several half-marathons. He said being a part of the Brigham team and hearing the stories of other members inspire him.
Bonner hopes to make running the Boston Marathon with the Brigham an annual tradition.

“After learning about Gillian’s story and having close, personal ties to BWH, I knew this was the charity I wanted to support,” Bonner said. “What a thrilling experience to be part of a team with a common goal to turn tragedy into hope for people who have been impacted by the devastation of traumatic injuries and events.”