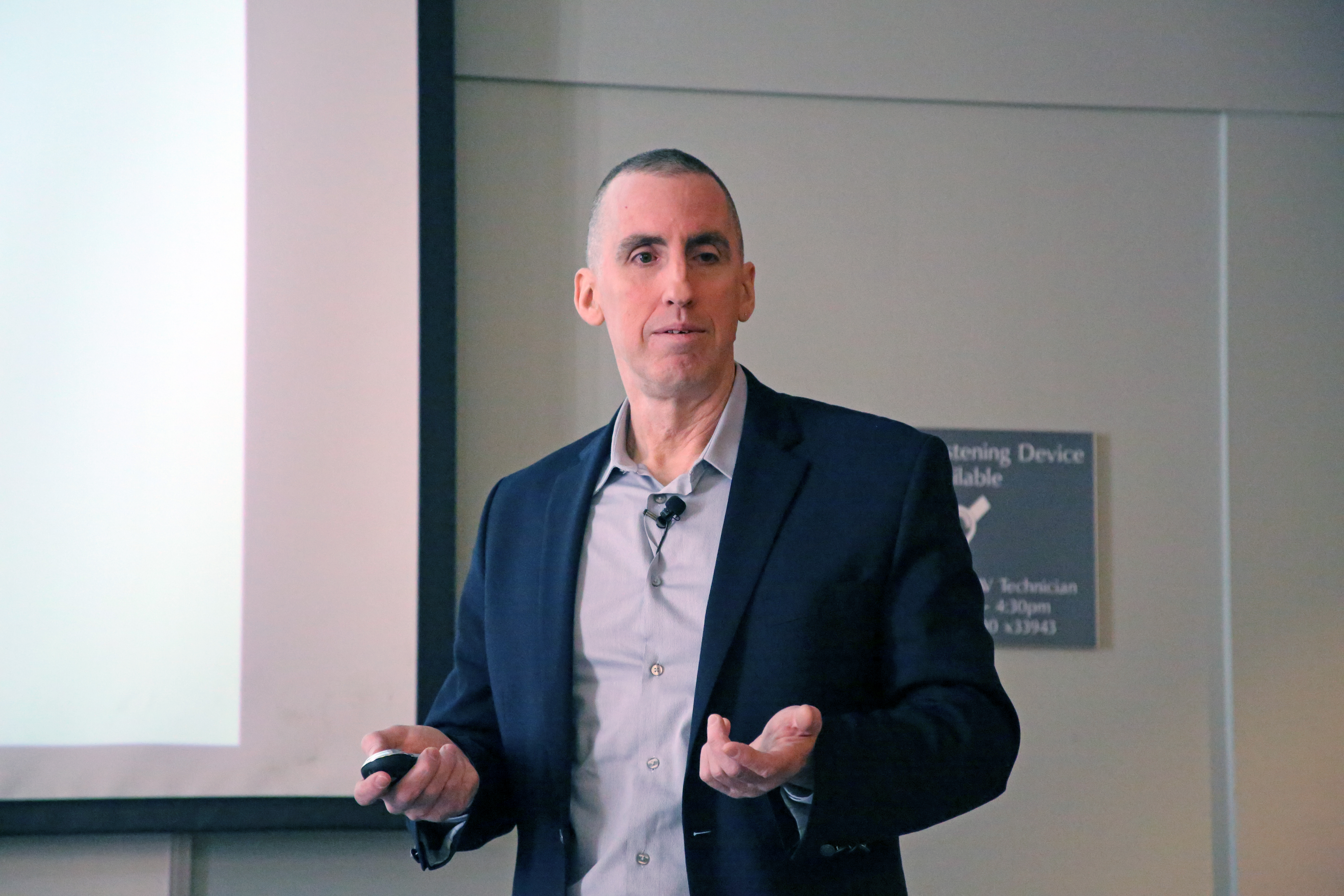 David Kelly speaks to BWHers about overcoming opioid use disorder, which he developed on the job as a nurse.

Boston-area nurse David Kelly, RN, spoke candidly with BWHers recently about overcoming opioid use disorder, hoping to encourage other health care professionals experiencing addiction to come forward and seek help before it puts their lives and careers in jeopardy.

On March 23, Kelly, who previously worked in an emergency department at another Boston hospital, spoke during BWH’s second Opioid Grand Rounds in Carrie Hall. The bimonthly speaker series, sponsored by the Brigham Comprehensive Opioid Response and Education (B-CORE) program, features discussions about the prevention and treatment of opioid use disorder.

Before introducing Kelly, Scott Weiner, MD, MPH, of the Department of Emergency Medicine and director of B-CORE, spoke about the importance of having a forum to talk about opioid use disorder.

“It’s time to start thinking about opioids the same way we think about high blood pressure and diabetes,” Weiner said. “David’s experience with opioid use disorder is extremely telling. We’re trying to reduce the stigma surrounding this disease, because if it can happen to David, it can happen to anyone.”

Kelly began using opioids in 2007 as an occasional coping mechanism for dealing with stress at home and work. He obtained them from the emergency department where he worked, first by simply not discarding leftover “waste” narcotics. When the leftover narcotics weren’t enough, he obtained another nurse’s password and would sign out medications using the nurse’s computer credentials.

At first, Kelly used opioids infrequently. He’d inject morphine into his leg once every few days, for example, which would relax him and get him through a long day. But soon he became dependent.

“I’d use first thing each morning, and then I’d use again in the middle of my shift,” Kelly said. “At the height of addiction, I was getting medications however I could. This was the new norm for me.”

After being questioned by supervisors for his actions in 2010, Kelly confessed. He was terminated from his position soon after and entered the Substance Abuse Rehabilitation Program (SARP), a five-year program for nurses run by the state Board of Registration in Nursing.

Every day, Kelly regrets letting down his colleagues and patients: “I betrayed everyone’s trust.”

Bringing Hope to Others

Completing SARP allowed Kelly to maintain his nursing license while getting the assistance he needed. The program is a voluntary alternative to disciplinary action by the state licensing board for nurses, meaning that upon completion of the program, Kelly could have chosen to return to the health care field as a nurse without restrictions. However, he now devotes his time to sharing his story in hopes that it makes a difference.

While Kelly appreciated the opportunity to get help, he says he’d like to see more services, such as career support and options for paid or unpaid leave, to help nurses feel confident about seeking help sooner.

“We have great recovery programs in this state, but our outreach needs to improve,” he said.

Kelly encouraged colleagues to educate themselves about substance abuse and signs of drug diversion. He recommended health care professionals who are suffering, or know someone else who might be, seek out assistance from their employers.

At the Brigham, the Partners Employee Assistance Program provides free, confidential support for several work/life issues, including substance abuse and other addictions. In addition, the Center for Faculty Development and Diversity provides programs and resources that support the wellness of BWH faculty and trainees.

“If the attitude toward those with substance use disorders is more proactive, through education and support, rather than reactionary, more people may get the help they need to overcome their addiction before losing their job,” Kelly said. “If you’re struggling, please know there is hope. You’re not alone.”

The next Opioid Grand Rounds is Thursday, May 23, 8-9 a.m., in Carrie Hall. Opioid researcher and medical toxicologist Edward Boyer, MD, PhD, of BWH’s Division of Medical Toxicology, will discuss how opioid dependency develops.

A recording of the webcast is available here (must be on BWH network to access).

3 Responses to “‘It Can Happen to Anyone’: Nurse Shares Story of Opioid Addiction”