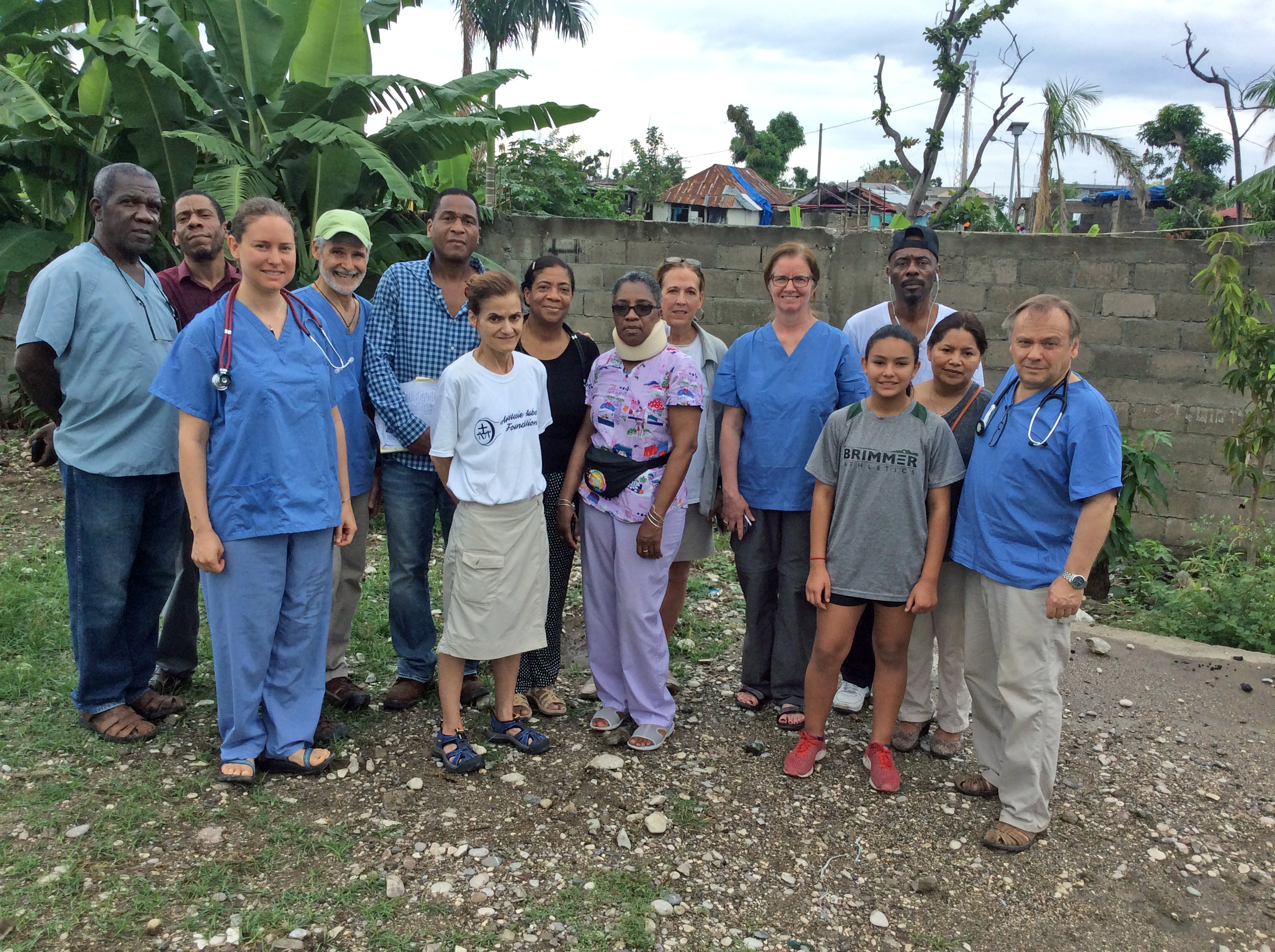 Volunteers from Haiti and the U.S., including BWH’s Anne-Marie Armand (center, in purple scrubs) and Hubertus Kiefl (far right)

Kiefl was joined by 13 care providers and volunteers from BWH, a Haitian clinic and the Anastasie Aubourg Foundation, a Norwood-based nonprofit dedicated to promoting education and improving health in Haiti. They traveled to the town of Les Anglais, located in the southwestern region of Haiti, to provide acute care to people of all ages.

This was the third trip to Haiti that Kiefl, medical director of the foundation, participated in. He said the latest trip was the most difficult, both emotionally and physically, as he witnessed firsthand how Hurricane Matthew, which struck southwestern Haiti last October, devastated residents, especially those who live in and near Les Anglais.

“I’m grateful we were able to bring much-needed medications, medical supplies and food to children and families who are facing so much devastation,” Kiefl said. “I’m so glad that we could be there to care for others. That’s what we went to medical school for – to help others feel better. That’s the essence of medicine.”

The team cared for people with various conditions, including high blood pressure, diabetes and malaria. In addition, clinicians and other volunteers worked with a Haitian urologist who joined the mission and performed five surgeries.

The team saw a large pediatric population and cared for women who were pregnant or breastfeeding. Kiefl said the team also provided health education to patients, including breastfeeding techniques.

Kiefl and his colleagues provided these services at a clinic in Les Anglais. Although the facility normally has one doctor who works a half-day each week, the closest hospital is two hours away. Many residents rely on the local clinic for medical services.

Anne-Marie Armand, LPN, of Brookside, is Haitian and was able to translate for many of the patients in the clinic. She was happy to help others in need and hopes to go back to Haiti soon on another mission.

“It was a feeling of fulfillment for me,” Armand said. “The patients were extremely grateful.”

The team was also able to bring donations of household items and toys to Haiti, including 500 toothbrushes, 800 pairs of reading glasses and 350 stuffed animals, as well as generic medications. The team also visited a local school and donated various school supplies.