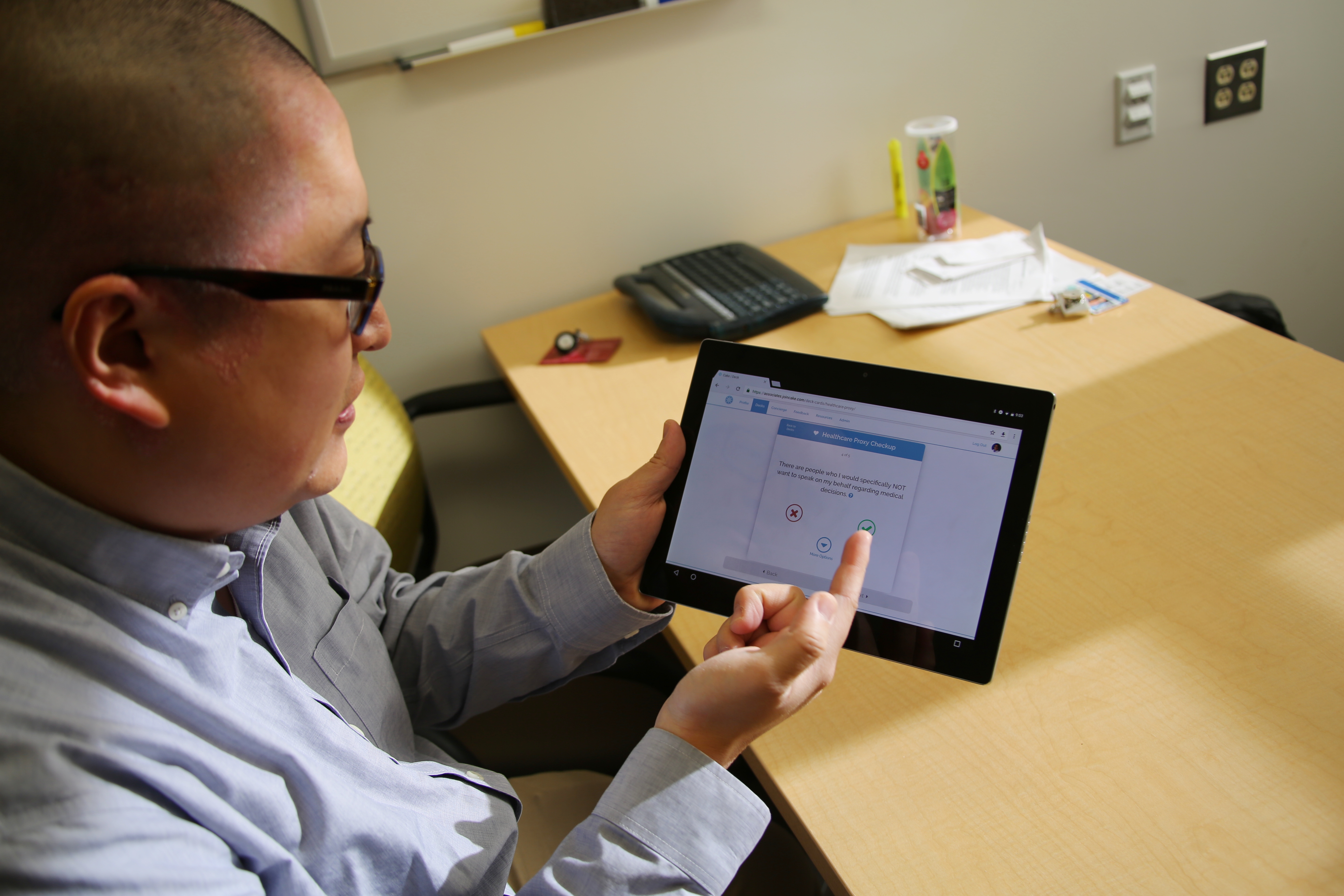 Mark Zhang demonstrates how to use the Cake app.

End-of-life planning is a task many people find uncomfortable, but a BWHer behind an app called Cake is looking to change that view.

Developed by Mark Zhang, DO, a Clinical Informatics fellow, the browser-based interface presents users with a series of questions in simple language about their preferences and goals. It divides end-of-life planning into four major categories: financial, health care, funeral and legacy. Users answer yes or no to various prompts, ranging from big-picture topics like caring for dependents to more detail-oriented ones, including, “I want to choose the music at my funeral or memorial event.”

“When I was working in internal medicine, I would see patients admitted to the hospital who had never thought about any kind of advanced care planning,” said Zhang, who is also a Palliative Care consultant at Dana-Farber Cancer Institute. “They may have just received a tough diagnosis or they were really sick, and that’s the first time they’ve had the conversation. A lot of people don’t think about this until the acute diagnosis, and they get taken completely off guard. These conversations should get started much earlier.”

The name Cake has a few different meanings, but primarily it reflects the different “slices,” or categories, of information that users provide through the app, Zhang said. It is also meant to remind users that affirming their goals and preferences is a celebration of life – a practice typically associated with cake. Listen to Zhang describe the thought behind the name:

Zhang developed Cake outside of the Brigham, and it hasn’t been used in patient care here. In 2015, he teamed up with Suelin Chen, the founder of an end-of-life planning site called My Exit Strategy. The two had previously met at an event at the Massachusetts Institute of Technology and realized they shared similar interests. They began developing Cake with a common goal: to lower the barriers to advanced care planning by making it accessible and easy for anyone with a smartphone or tablet.

Since Cake’s release in late 2015, it has received positive feedback and gained popularity among users of all ages. But one particular finding stood out to Zhang early on: “People actually wanted to share these details, which was another signal that this was something worthwhile to move forward with.”

Zhang says that user interaction and feedback are playing big roles in future development. A newer version of Cake, slated for an April release, will allow users to generate a health care proxy document, along with the ability to print out a copy of health care preferences to discuss with loved ones and doctors.

Still in a beta release, Cake has been tested by more than 2,000 users. For now, the app is not marketed directly to the public, although anyone can access it. Zhang and his team recently contracted with Blue Cross Blue Shield of Massachusetts and Harvard Pilgrim Health Care to offer Cake to their employees.

“Five to 10 years from now, my hope is that Cake is what comes to mind when you think about advanced care planning. I want ‘Cake’ to become a verb like ‘Google’ and ‘Facebook’ have,” Zhang said.