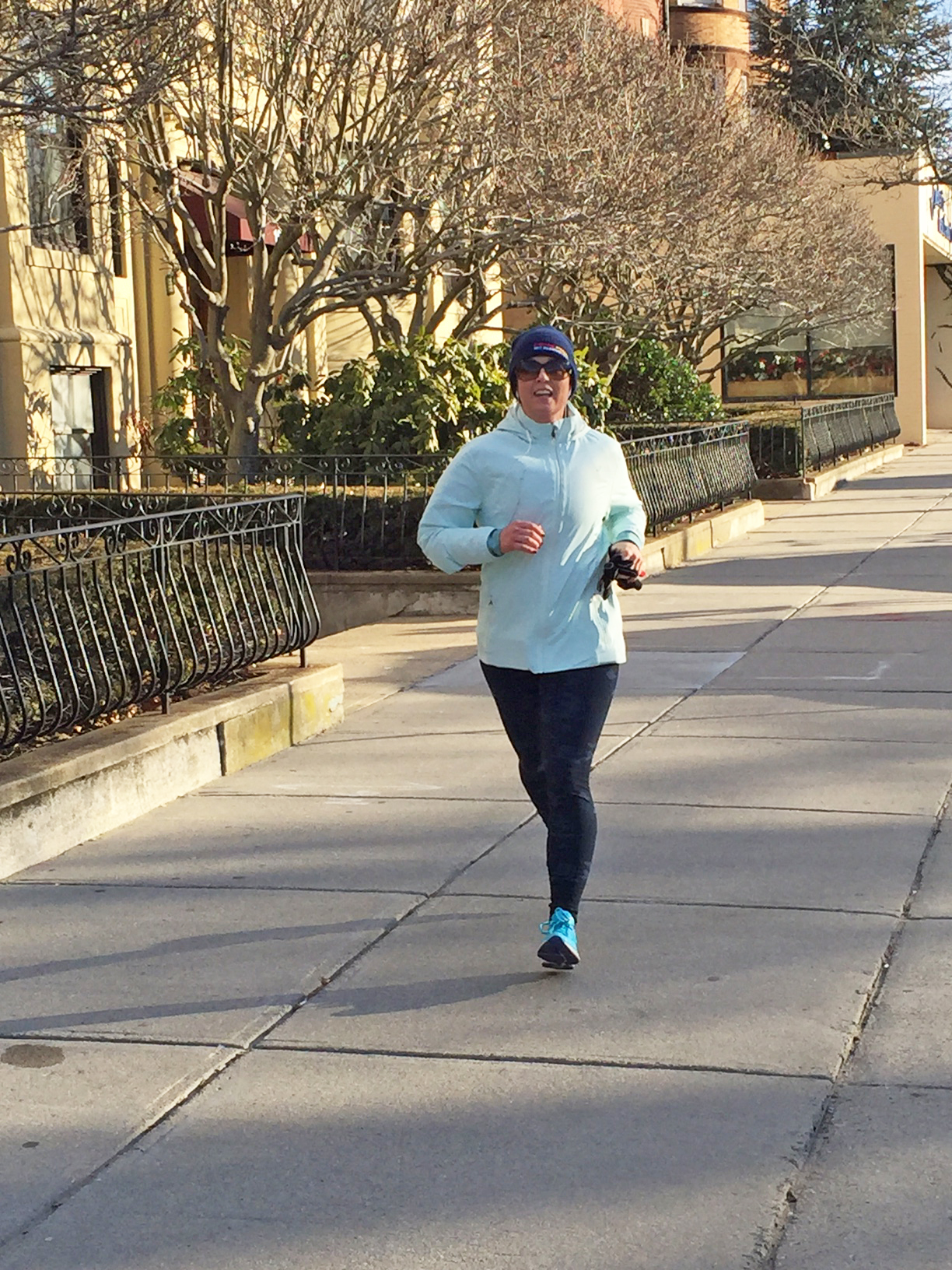 Rebecca Riff trains for the marathon with the BWH team in Brookline.

This is the first article in a weekly series profiling runners participating in this year’s Boston Marathon on behalf of BWH.

As Rebecca Riff was undergoing treatment for Hodgkin’s lymphoma at BWH, she set a simple goal: walk 20 minutes every day.

Each step was slow and exhausting. It was a humbling moment for Riff, then 32 years old and a three-time marathon runner. The chemotherapy and radiation treatments beating back the cancer in her lymph nodes had weakened her body. Even so, she recalled, those daily walks in 2006 were deeply rewarding.

“It was this feeling of being outside, moving and alive,” she said. “I just told myself, ‘Put one foot in front of the other.’”

Riff repeated that mantra the following year as she ran her fourth marathon. Now, a decade later, she finds herself saying those words again as she prepares to run her fifth marathon – this time with BWH’s Stepping Strong Marathon Team on April 17.

In addition to wanting to give back to the hospital that helped save her life, Riff says she was moved by the mission of The Gillian Reny Stepping Strong Center for Trauma Innovation. Reny, a 2013 Boston Marathon bombing survivor, received lifesaving care at BWH after the bombings and established the center with her family to fuel research and clinical programs to advance trauma healing.

“I felt inspired by Gillian and others who have faced obstacles and have been able to – through their strength and the support of their medical teams and families – get stronger each day,” said Riff, now a 43-year-old mother of three who lives in Manchester-by-the-Sea. “That theme really resonated with me.”

Like many others, Riff was deeply affected by the 2013 tragedy. The response that followed gave her hope for “the city I love like a family member,” she said.

“I was in awe of the first responders, bystanders and the ways in which Boston’s hospitals, including BWH, dealt with the tragedy,” Riff said. “The life- and limb-saving medical care that took place at BWH is simply astonishing.”

Running for a ‘Remarkable Institution’

At BWH, Riff has been a patient of Peter Mauch, MD, and more recently Andrea Ng, MD, both of Radiation Oncology. In addition, their research focuses on an area that affects Riff and other Hodgkin’s patients: the long-term effects of radiation, such as increased risk of breast cancer and cardiac disease, as well as best practices for screenings and other post-treatment care. Riff says that knowing her physicians are working on these issues – in addition to the exceptional care they provide – makes her appreciate being a BWH patient.

“I have long admired BWH not just for the high-quality, compassionate care I have received but also for the excellence in care across specialties and the level of innovation and groundbreaking research that has taken and continues to take place at BWH. It’s a remarkable institution,” Riff said.

As she gets ready to run this year’s marathon, Riff has been keeping her old mantra in mind while training with other runners participating on the Stepping Strong team.

“It brings me back to that feeling that I had in 2006,” she said. “I have moments when I remind myself to keep putting one foot in front of the other and think about the people I’m raising money for and all they’ve had to endure. These things keep me going when I’m feeling tired or sore.”