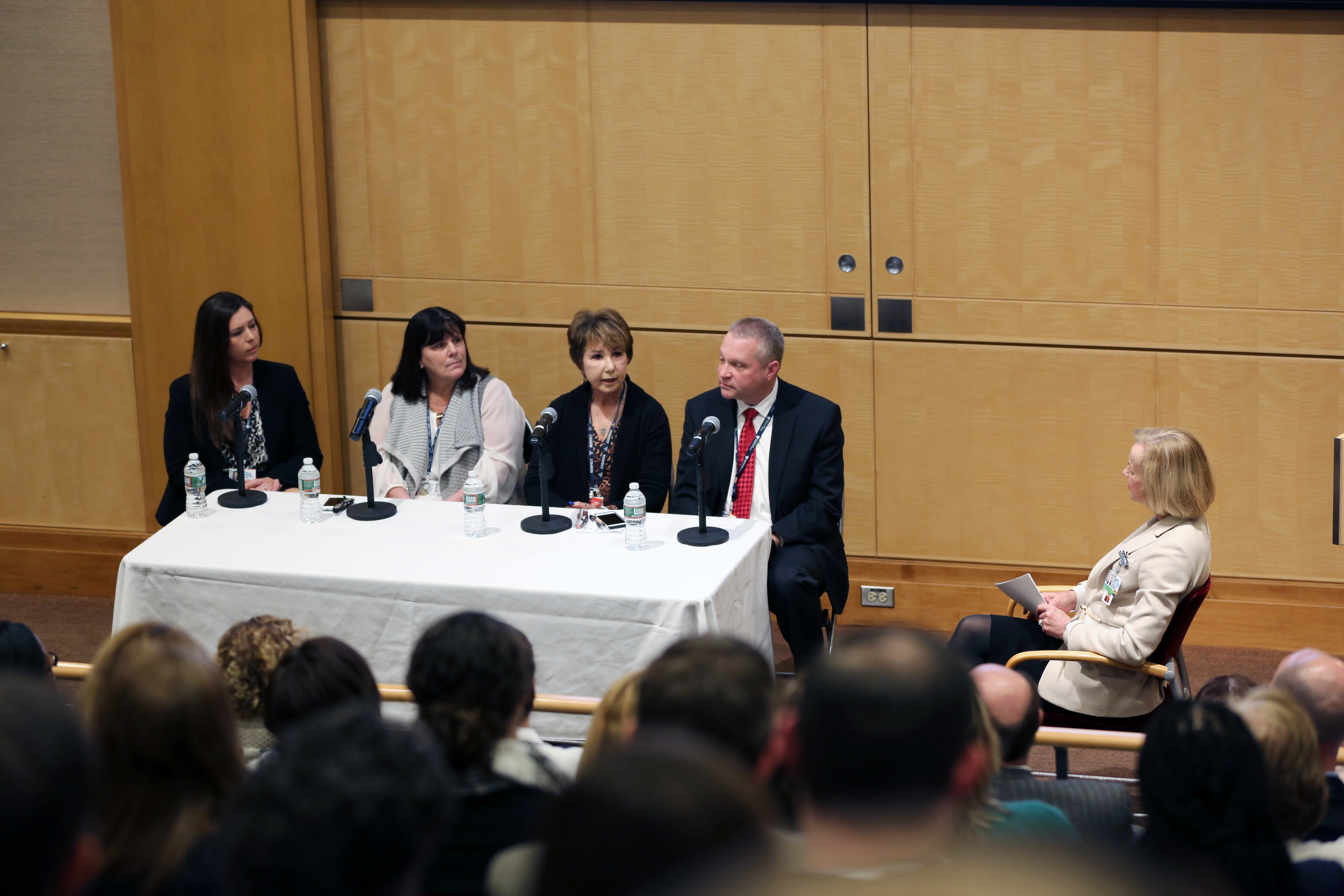 While patient safety remains the utmost priority for hospitals, the reality is that medical errors still occur. One way to prevent them from happening again is to focus on transparency and education – as opposed to blame – said BWHers who spoke during a recent Quality Rounds.

As part of a panel moderated by Brigham Health President Betsy Nabel, MD, several BWHers discussed two adverse events that took place at the Brigham and what their teams learned from the experiences. The event was part of a Quality Rounds presentation, “Brigham Health Safety Culture: Moving Forward Together,” in Bornstein Amphitheater on March 3. In addition, Nabel shared the results from the 2016 Safety Culture Survey and spoke about next steps.

“This is an extraordinarily important conversation that we want to have together,” Nabel said. “I know we’ll all leave here better informed and better prepared to serve our patients and families.”

The first adverse event involved a patient who was transported to Radiology on a metal stretcher for an MRI scan. At the conclusion of the exam, the patient was transferred back onto the metal transport stretcher, and then inadvertently wheeled back into the MRI room. When the MRI scanner began pulling the stretcher due to the magnetic field, staff instantly removed the patient from the stretcher. No harm was caused to the patient or employees, but the stretcher was pulled onto the MRI machine, causing significant and costly damage.

The case prompted supervisors in that unit to review what happened using a system of shared accountability, or “Just Culture,” enabling them to examine gaps in the system that may have led to the error.

“We were connected with the Department of Quality and Safety,” said Marsha Doherty, operations manager for L1 MRI Services. “They walked us though the Just Culture process, and we were given the tools to handle the incident in a different way than we originally thought.”

Department leaders held several meetings with members of the Just Culture team, which includes Peer Support, Human Resources, Nursing, Risk Management and the Department of Quality and Safety, to understand the situation and how it happened, according to Stuart Hooton, administrative director of MRI, CT Scan and Cross-Sectional Interventional Radiology. The technologist involved in the case was also invited to the meetings to provide input.

The meetings shed light on mitigating circumstances the team wasn’t aware of, Hooton said. It was discovered that the technologist had been working for 10 hours straight, and to keep his patients from waiting, he did not take his lunch break that day, which may have contributed to him feeling fatigued and distracted.

“There was a lot of fact-finding involved,” Hooton said. “It may sound straightforward on the surface, but we needed to understand the factors behind it rather than have a knee-jerk reaction to the situation.”

Christian Dankers, MD, MBA, medical director for Quality and Safety, explained that this particular case was a learning experience for everyone involved and a good example of how challenging it can be to determine the right course of action.

“When we first learned about this case, the right response wasn’t clear: Was this person the risk, or was this system the risk?” he said. “It was really tricky, and it’s important in situations like these to be able to think it through together.”

Although the Radiology team’s first instinct was that termination of the employee involved was appropriate, after collaborative Just Culture discussions, all agreed punitive action for one individual wouldn’t prevent something like this from happening again.

Applying the principles of Just Culture is not always intuitive, but that’s where the Just Culture team can provide guidance, Dankers said.

Also among the panelists were the Emergency Department’s nurse director Janet Gorman, MM, BSN, RN, and pharmacist Sarah Culbreth, PharmD, BCPS. They discussed a case in which a patient received a higher dose of insulin than ordered because a nurse confused the concentration with the dose. The nurse involved in this case was approaching the end of 16 hours at work when the error was made.

Panelists stressed the importance of working through issues using the Just Culture model and sharing information about the process with colleagues. A Just Culture abandons a “blaming culture” where people are afraid to voice concerns or report mistakes for fear of punishment.

“Don’t struggle alone with situations like these,” Doherty said. “We have wonderful resources here. The Just Culture team was so approachable and committed to making Just Culture part of our resolution.”

During the second half of the event, Nabel presented findings from this year’s Patient Safety Culture Survey. Conducted for the third time since 2012, the survey is completed confidentially by BWH staff who have direct patient care responsibilities, providing an opportunity for leaders and managers to receive feedback about safety-related issues.

About 9,000 employees were asked to take the latest survey and rate several aspects of the Brigham’s safety culture, including overall perceptions of patient safety, frequency of events reported and staffing.

For the most part, survey scores did not change much in comparison to the last survey. The latest survey identified opportunities for improvement, including management support for patient safety.

In the coming months, the Quality and Safety team will continue to share the results and solicit staff feedback to determine where we need to make improvements, Nabel said.

“The important message here is that we are listening,” Nabel said. “We want to know what you’re thinking and how you’re feeling. These surveys allow us to learn from one another and engage in conversation about our safety culture.”

View the webcast. Learn more about quality and safety at BWHSafetyMatters.org.