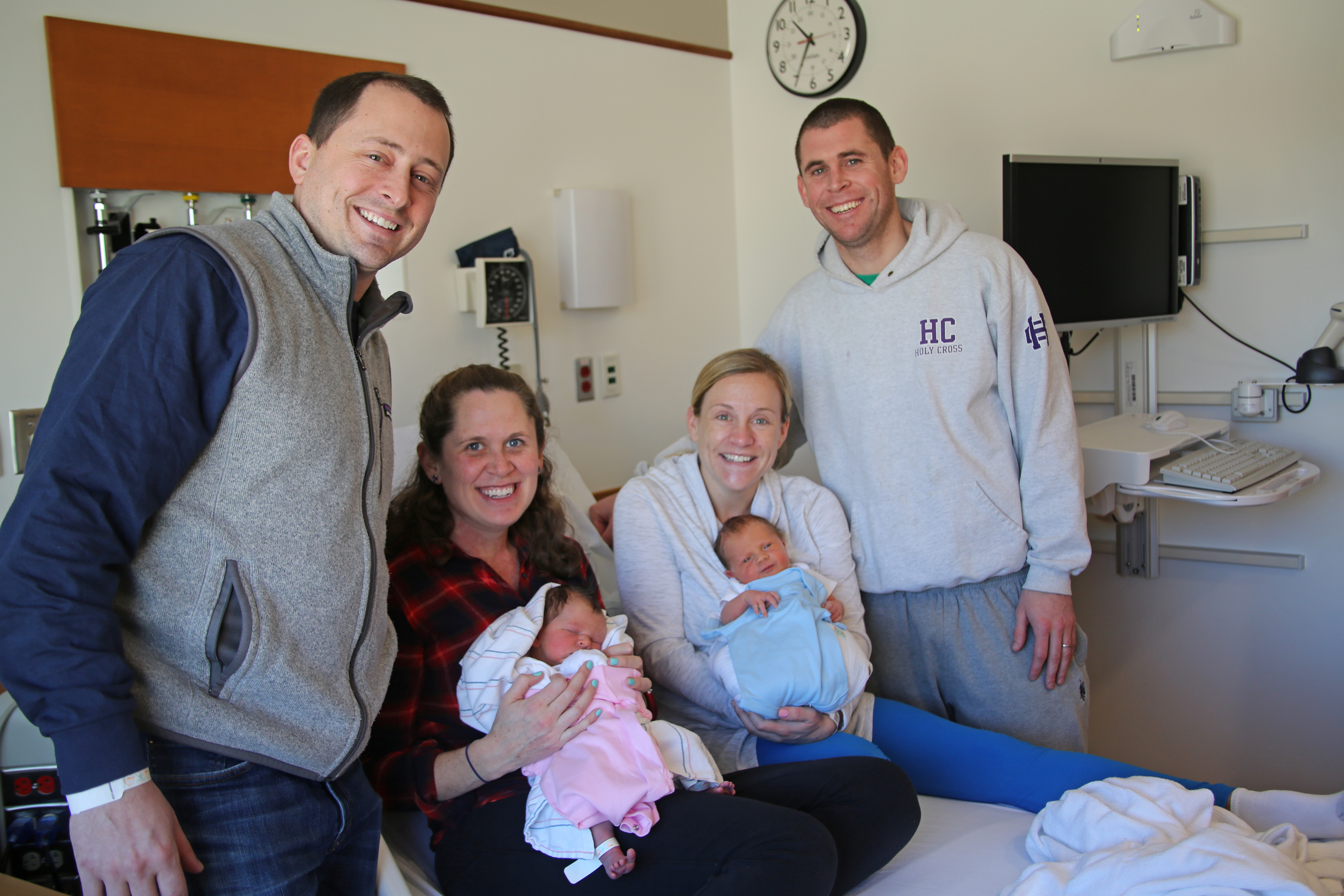 From left: Parents Matt Kyller and Kelli Jones Kyller, and parents Sarah Jones and Ryan Jones, with their newborns. Matt and Sarah are siblings, as are Kelli and Ryan.

It’s safe to say the Jones and Kyllers’ family tree has more intersecting branches than most, with its roots coming from two sets of siblings who married their spouse’s sibling. Two more joyful, overlapping and improbable branches sprouted recently when each family celebrated the birth of a child on the same day at the Brigham.

Kelli Jones and Matt Kyller met while they were students at the College of the Holy Cross in Worcester. In the run-up to their 2009 wedding, Kelli’s younger brother, Ryan Jones, also a Holy Cross alum, was introduced to Matt’s younger sister, Sarah Kyller. Ryan and Sarah fell in love, marrying four years later.

Last year, sisters-in-law Sarah and Kelli – now Kelli Jones Kyller – learned they were pregnant at the same time, with due dates a week apart. Despite being a family whose lives were interwoven in many ways, both moms were stunned by this latest twist, especially after delivering their babies less than 12 hours apart from each other.

“Ryan kept saying we were all going to be in the delivery room at the same time, but we thought, ‘No way is that going to happen,’” said Matt.

But Ryan was adamant throughout the pregnancy that the babies would be born the same day – even predicting correctly that Sarah would give birth a week early.

“I was just convinced that we’d be here at the same time,” he said. “Our families are already pretty close, so this works out for everyone.”

‘This Is Actually Going to Happen’

Ryan double downed on that assertion when the Easton couple welcomed their second son, Colin, to the world that February morning. The Jones grandparents were driving home after visiting Ryan, Sarah and Colin at BWH when they got the phone call: Kelli’s water had broken.

“I just started hysterically laughing,” Kelli said. “I was like, ‘Matt, I think this is actually going to happen.’”

The Milton couple’s third daughter, Reagan, was born that night.

Both moms and babies also have been cared for by some of the same providers, including obstetrician Lisa Lampert, MD, of New England OB/GYN Associates, and pediatrician Lise Johnson, MD, chief of the Division of Newborn Pediatrics. Lampert shared another special link with the families: She is a Holy Cross alum, as well.

“It was a first for me to deliver cousins on the same day and fun that we also all had that Holy Cross Crusader connection,” Lampert said.

The two families recovered on the same floor in the Connors Center. It was comforting to have each other nearby, as a snowstorm had prevented most of their family and friends from visiting that week, Matt said. In addition, Matt and Sarah’s dad, Michael Kyller, MSN, RN, CCRN, CNS-AC, is a nurse educator in BWH’s Cardiovascular Diagnostic and Interventional Center, which made it easy for him to visit.

The couples’ other children, all of whom were born at the Brigham, are excited to welcome home a new sibling and cousin each, Sarah said.

“We’re used to doing a lot of stuff with our siblings and families, so it doesn’t really seem that weird to us,” Matt said. “But then you think about it, and it’s exciting. It was really nice to have our family here.”