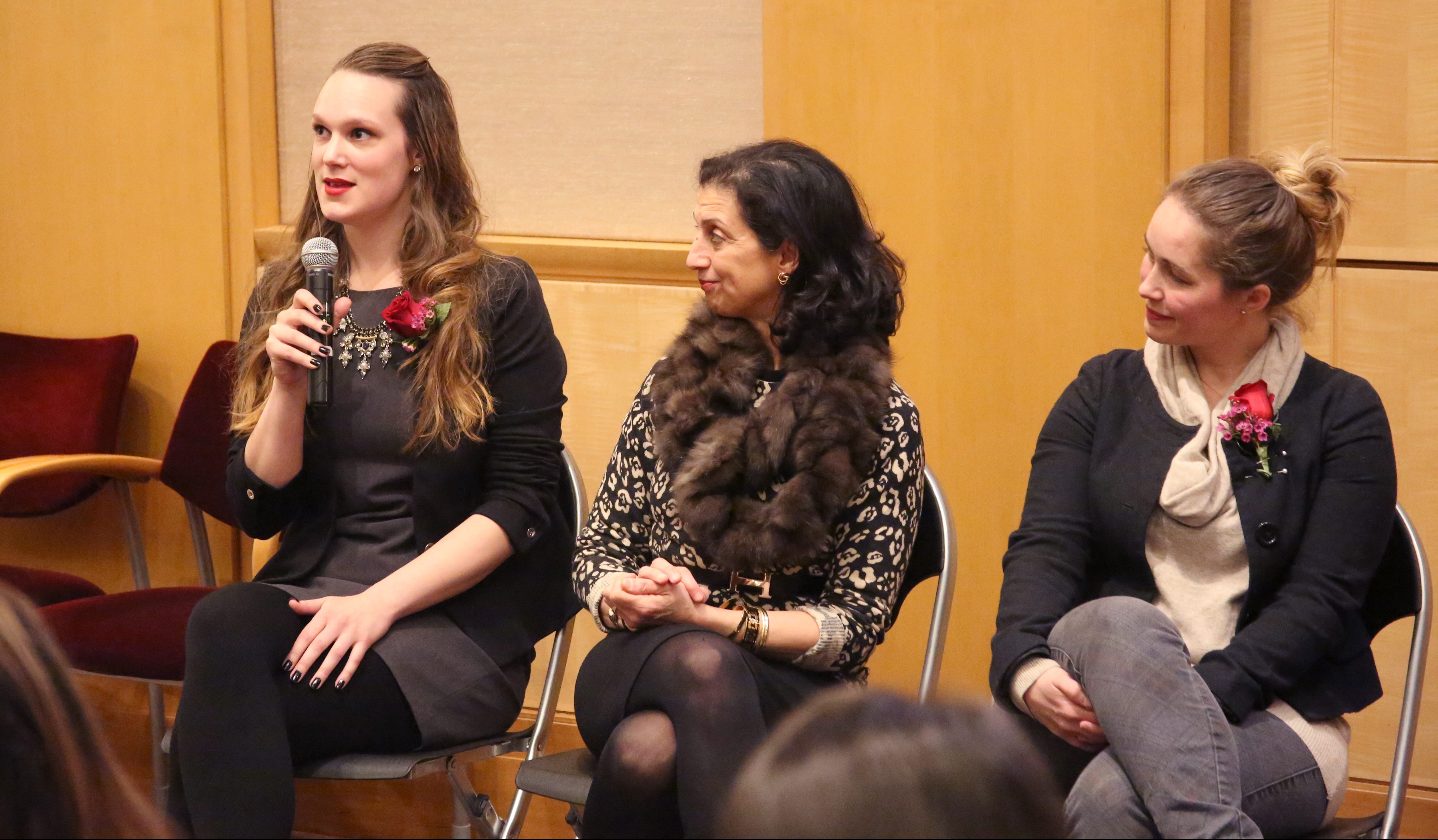 From left: V-Day speaker and survivor Kalie responds to a question alongside panelists Soheyla Gharib and Ramsey Champagne.

“What’s wrong?” It’s a natural opening question when trying to find out why a patient is in distress.

But those two words, which many patients would find harmless, can cause those who have experienced trauma to shut down during an appointment if they interpret it as judgmental or accusatory, according to speakers who participated in BWH’s second annual event honoring V-Day, held Feb. 10 in Bornstein Amphitheater.

The insight was one of many shared at this year’s event, titled “A Trauma-Informed Care Approach to Treating Campus Sexual Assault Survivors.” During the program, a sexual assault survivor shared her story, followed by a panel discussion with experts from BWH and Harvard University. The event was among the hundreds that took place around the world that day as part of V-Day, a movement aimed at raising awareness about violence against women and girls.

Getting patients who have experienced trauma to feel comfortable opening up to their provider is a slow, gradual process – and one that doesn’t always result in a complete picture, explained panelist Annie Lewis-O’Connor, NP, PhD, founder and director of BWH’s Coordinated Approach to Recovery and Empowerment (C.A.R.E.) Clinic. Establishing trust starts with creating a dialogue that “seeks to understand what happened to you, not what is wrong with you,” she said.

“Sometimes, health care providers feel like they have to ask very pointed questions and get the whole story,” said Lewis-O’Connor, who co-chairs BWH’s V-Day Committee with Jeffrey Katz, MD, MSc, of the Division of Rheumatology, Immunology and Allergy. “What we’ve found out is all the patient needs to tell me is, ‘I’ve had something really bad happen, and I need help.’ And in their time and way, they can share as little or as much as they’re comfortable with.”

Nomi Levy-Carrick, MD, MPhil, of the Division of Medical Psychiatry, agreed that caring for survivors requires a different way of thinking.

“Sometimes what we think is empathic – because of our backgrounds or the way we’ve been taught to speak – actually doesn’t come across that way to other people,” she said. “I am learning every week about how, in different contexts, we can engage different people in ways they feel safe.”

Understanding the Needs of Survivors

What providers and patients say – and how they say it – is only the starting point, speakers said. Patients who have experienced sexual assault may not want to be touched or change into a robe, requiring adjustment to the traditional physical exam.

Kalie, a volunteer at the Boston Area Rape Crisis Center and sexual assault survivor (who used only her first name), said she had a lot of anxiety about seeking care from her primary care provider to address medical concerns resulting from the assault. Her therapist referred her to a clinician who had been trained in trauma-informed care – an approach that recognizes the multiple symptoms and effects of trauma, incorporates that knowledge into practice and procedures, and avoids actions that may retraumatize the patient.

“It was a weight off my shoulders to walk into a room with a doctor and know that if I had a panic attack or got triggered, she wouldn’t be confused by that,” she said. “I could say, ‘This is an injury I’m concerned about,’ and she wouldn’t make me explain in detail how it happened.”

Speaking directly to members of the audience, Kalie thanked providers for wanting to understand the needs of patients like her.

“It’s little things that make a big difference – a slight tweak in language that makes the appointment feel less accusatory and more like you want to know my story,” she said. “You have no idea how it feels to know that I can walk into this hospital and you, as an organization, are supportive of survivors and women’s health. That would make me feel better about coming here and telling another survivor to come here if they needed services. That’s a big deal.”

To learn about training opportunities in trauma-informed care, contact Annie Lewis-O’Connor at aoconnor@partners.org or 617-525-9580.