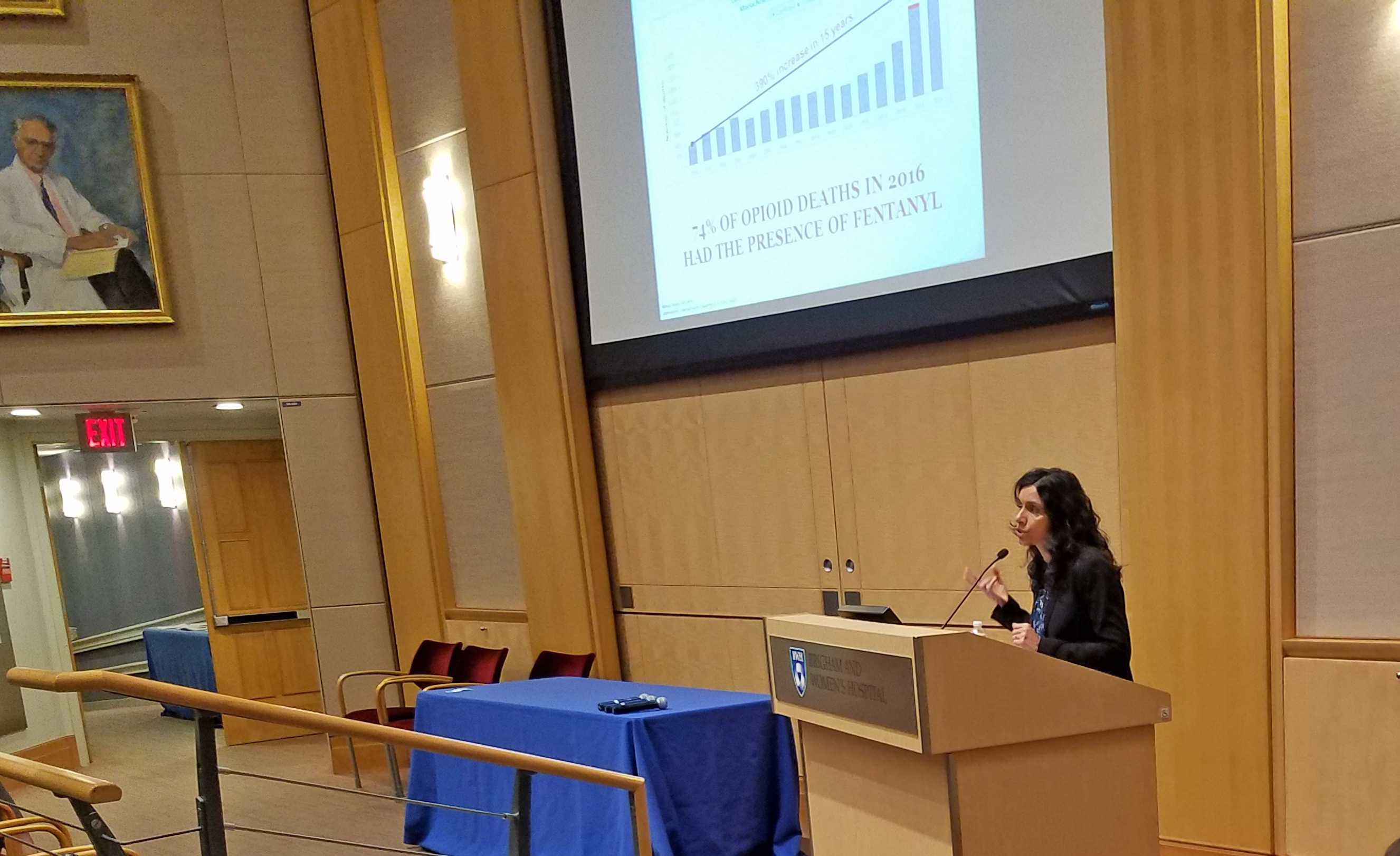 The number of opioid-related deaths in Massachusetts has increased fourfold over the past decade, with data showing that five people in the state die every day due to an opioid overdose. Behind these staggering statistics are patients, families and communities struggling to get the help they need, and clinicians have an opportunity to help fill that gap, said Monica Bharel, MD, MPH, commissioner of the Massachusetts Department of Public Health, during BWH’s inaugural Opioid Grand Rounds on Feb. 2.

The event, sponsored by the Brigham Comprehensive Opioid Response and Education (B-CORE) program, kicked off a bimonthly speaker series about issues around the prevention and treatment of opioid use disorder.

Data is playing an important role in how the state is responding to the opioid epidemic, with the goal of analyzing it in a way that provides specific guidelines for frontline clinicians, said Bharel.

Getting to that point involves pulling information and seeking out experts from multiple sources, ranging from hospitals to law enforcement. Among the more revealing findings has been the overlap between a sharp increase in opioid-related deaths since 2014 and the presence of fentanyl at the time of death. Fentanyl is a powerful synthetic opioid that is 50 to 100 times more potent than morphine. Nearly three out of four people who died from an opioid overdose in Massachusetts between 2015 and 2016 had fentanyl in their system.

“We’re talking about the numbers in a big picture today, but it’s important to know that behind each one of these is an individual, family and community, and this disease has such profound impacts,” Bharel said.

This is not the first opioid-related epidemic the country has endured, but it has been the deadliest, mainly due to the widespread presence and potency of fentanyl, Bharel said. Another difference this time: Most people who die were introduced to opioids through the use of prescription painkillers, she said.

Focusing on Prevention, Education and Treatment

Prevention and education – for patients and prescribers – are key to turn those trends around, Bharel said. At the Brigham, B-CORE recently developed guidelines and best practices to educate prescribers about new laws related to prescribing, ways to help prevent addiction and where to direct patients seeking treatment.

Another major focus statewide has been removing the stigma associated with addiction and  changing the way it’s viewed, by the public and providers alike, “from a choice or moral decision somebody makes to a medical illness” that should be properly treated, Bharel said. If communities and health care providers regarded opioid use disorder the same way as other life-threatening illnesses, it would change patient outcomes, she added.

“I would really urge us, in terms of what we can do within the medical system, to take a deep look at why we treat substance use disorder so differently,” Bharel said.

One example of that is the proactive distribution of naloxone, a fast-acting medication that reverses an opioid overdose. New laws have made it available more broadly – at BWH, it can now be obtained without a prescription from the Outpatient Pharmacy and is carried by Security officers – but Bharel’s hope is that it’s also provided to patients at the same time they’re prescribed an opioid.

Even if the patient isn’t at risk for developing an addiction – most opioids are prescribed to people over 50, whereas most opioid-related deaths occur in people under 44 – the patient may live with someone at higher risk who has access to those painkillers, she said.

“When we start to decrease the number of deaths, individuals suffering from substance use disorder can get an opportunity to receive treatment and recovery. And unlike something like chronic alcoholism, we have an antidote when someone is acutely at risk for fatal overdose,” Bharel said. “If this was a blood pressure medicine, we would all be using this all the time, so I urge us to think about ways we can enhance the use of naloxone throughout our communities.”

The next Opioid Grand Rounds is March 23, 8-9 a.m., in Carrie Hall. David Kelly, RN, a nurse who developed opioid use disorder and underwent recovery, will share his story.