Jim Ewing is a trailblazer – in every sense of the word.

A devoted rock climber, Ewing, 52, of Maine, is listed in guidebooks as the man behind several “first ascents,” a climbing term referring to the first time a route is completed and mapped out. He recently charted new territory yet again – this time as the first patient to undergo an experimental surgical procedure to amputate his lower left leg and replace it with a robotic prosthetic.

Two years ago, while rock climbing with his family in the Cayman Islands, Ewing suffered a devastating fall that sent him plummeting 50 feet, resulting in numerous injuries. Although his initial wounds eventually healed, he was left with chronic pain in his foot and ankle. Every step was excruciating.

When it became clear that no further surgeries or therapies would make the pain stop, Ewing began doing his own research. None of the physicians he met with would consider amputation – until he met Matthew J. Carty, MD, director of BWH’s Lower Extremity Transplant Program in the Division of Plastic Surgery.

“Within just a few minutes of meeting Dr. Carty, I was deeply impressed by his bedside manner,” said Ewing, who shared his story during a Nov. 21 press conference alongside Carty, who led the surgical team that performed the amputation at BWFH in July. “He was incredibly thorough and compassionate in a way I hadn’t seen in most other surgeons. He was listening to me.”

Carty has collaborated with the Massachusetts Institute of Technology (MIT) Media Lab Center for Extreme Bionics to develop a pioneering approach to amputation that would allow a patient’s brain to interact with a robotic prosthetic, resulting in increased mobility and sensation. The project was the inaugural winner of the 2014 BWH Stepping Strong Innovator Award.

“Our family understands profoundly what it is like to have life as you know it change in an instant,” said Epstein Reny, whose daughter, Gillian, was injured in the 2013 Boston Marathon bombing. “When we heard Jim’s story, we desperately wanted to help him get back to enjoying his life’s passions, including climbing. We are so proud he is the first patient beneficiary of a Stepping Strong innovation. It’s almost beyond words to see our family’s vision turn into hope for Jim.”

While other areas of medicine have experienced extraordinary breakthroughs, amputations have not evolved in 2,000 years, Carty said. If successful, this new procedure – which has been named the Ewing Amputation – will represent a major innovation in the field.

“We believe Jim’s progress will allow us to reframe the way we think about limb loss,” Carty said. “Traditionally, amputation has often been seen as a failure – the surgical equivalent of throwing in the towel to the ravages of trauma, disease or bad luck. By reinventing the way amputations are performed, we hope to elevate them to the status of another form of limb salvage, one designed to restore as much function as possible.”

When the foot flexes under normal conditions, muscles on the front and back of the leg work in concert – one muscle stretches as the other contracts. These muscles communicate such movements to the brain, allowing us to walk, run and move in other ways without much thought. Traditional lower-limb amputations sever this connection.

The Ewing Amputation preserves these relationships via a pulley system to maintain the link between the muscles. As a result, sensors implanted in the muscles will send signals to the brain when the leg moves. The aim is for the brain to power the robotic prosthetic Ewing will use as part of a clinical trial. This new approach to amputation is expected to restore more natural movement, control and sensation to amputees. 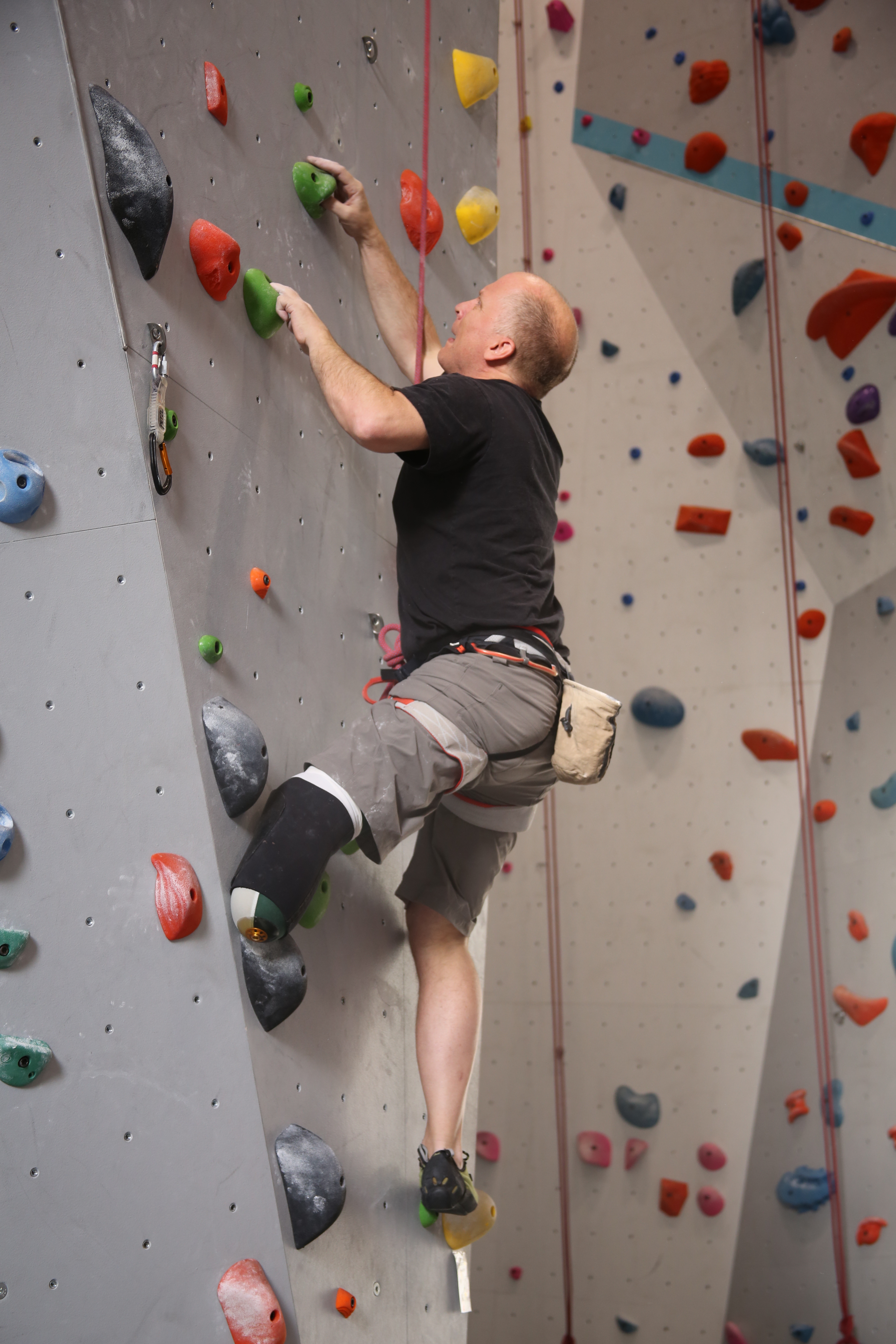 Jim Ewing scales an indoor climbing wall after his amputation.

Although Ewing is still early in his recovery, “he has demonstrated movement abilities and perceptions far beyond what we typically witness in patients with standard amputations,” Carty said. If successful, the same procedure could be applied to an amputation of an arm or hand, as well.

As for Ewing’s climbing career, he is scaling the walls of indoor climbing gyms with less pain and renewed confidence – even without a prosthetic – thanks to the first-of-its-kind procedure.

“Climbing is what I’ve been doing for most of my life, so I feel like I have my life back,” he said.