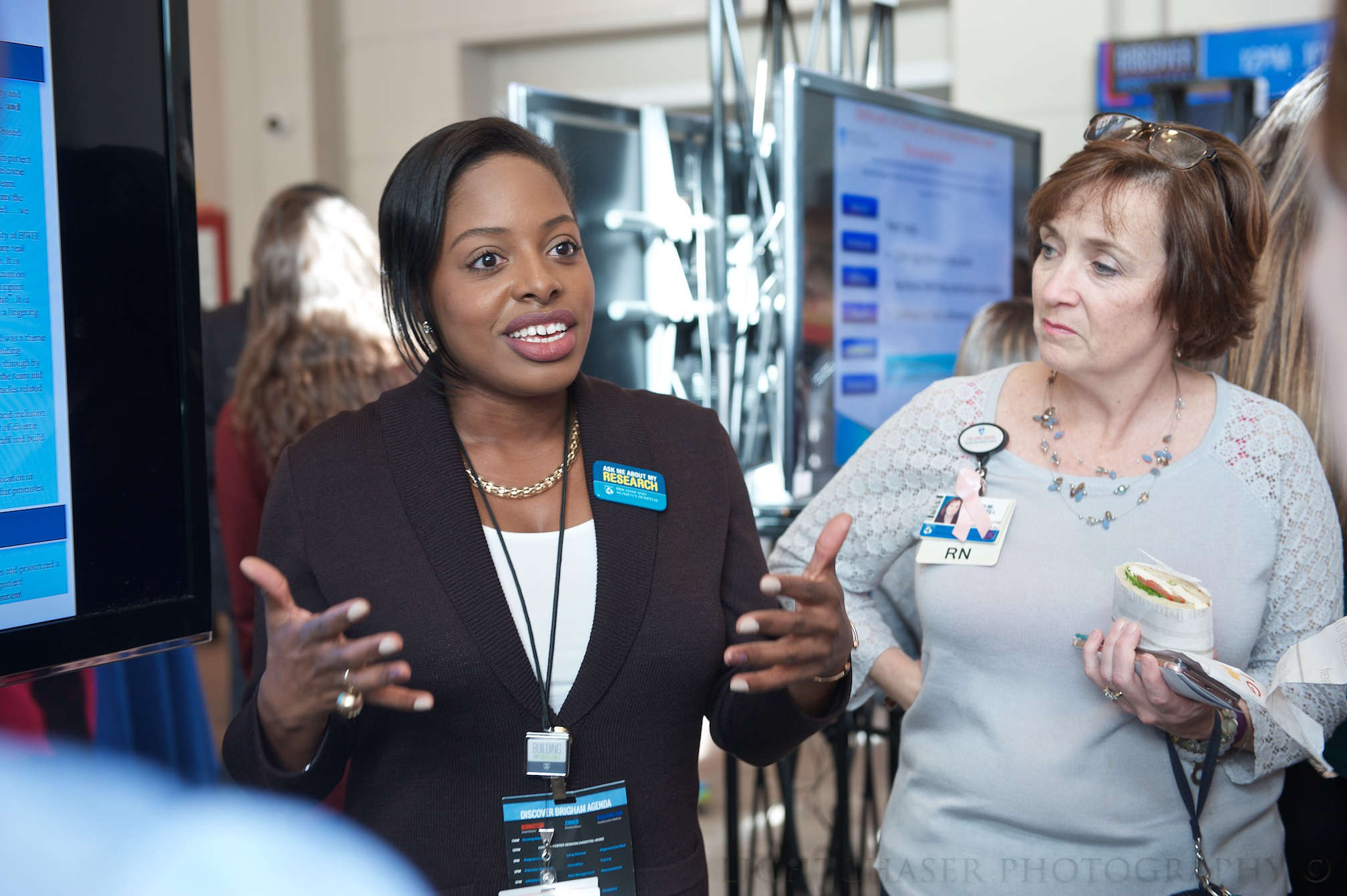 More than half a million dollars in research awards were presented at the second annual Discover Brigham, where winners of the BRIght Futures Prize and BRI Director’s $500K Transformative Award were revealed.

The Nov. 10 event, sponsored by the Brigham Research Institute (BRI), brought together clinicians, researchers and members of the public for a full day of panel discussions and presentations. The theme of Discover Brigham 2016 was “Collaborate, Accelerate, Translate,” reflecting the goals for the new Building for Transformative Medicine (BTM).

This year marked the debut of three simultaneous session tracks, covering a wide range of topics, including the opioid crisis, regenerative medicine, digital health and more.

“There was great energy at Discover Brigham this year. The scientific sessions were well-attended and really highlighted the breadth of the research,” said Jacqueline Slavik, PhD, executive director of the BRI. “This was the first year we featured only electronic posters, which looked fantastic and really allowed our junior investigators to present their work in a very engaging and interactive way.” 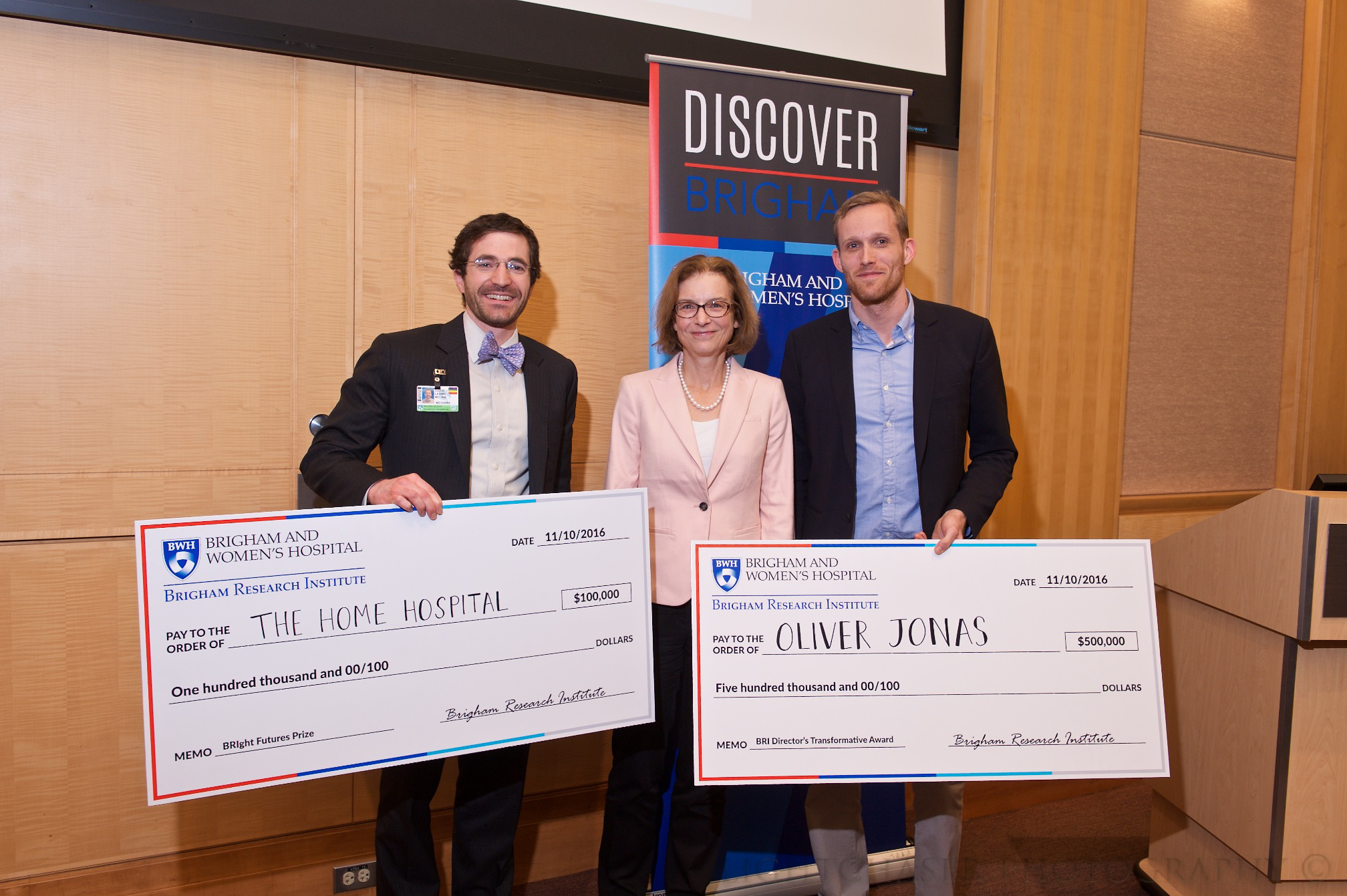 David Levine, MD, MA, a physician and researcher in the Division of General Internal Medicine and Primary Care, received the $100,000 BRIght Futures Prize to fund his project, “The Home Hospital.” The winner was determined by the public, with people from around the world casting their vote to fund one of three projects.

Patients selected for Levine’s randomized, controlled trial who come to the Brigham’s Emergency Department may receive care at home instead of being admitted to the hospital. Technology plays a key role in keeping the care team tuned into the patient’s status, including the use of a device that enables physicians and nurses to check vital signs via a skin patch. Patients use video conferencing to communicate with their providers and receive in-person visits at home from their physician and nurses.

The project is wrapping up a small pilot, with preliminary data showing that home hospital care lowers costs, improves patient experience and maintains quality and safety, Levine said. The BRIght Futures Prize will enable Levine to expand the pilot and study its outcomes.

“I am proud to be at an institution that supports innovation and outside-the-box thinking,” said Levine.

“It is our hope that, in the near future, home hospital care will be the standard not only at Brigham, but also nationwide,” Levine said.

Oliver Jonas, PhD, MA, a laboratory director in the Department of Radiology, received the BRI Director’s $500K Transformative Award – a two-year grant, the winner of which is selected by a scientific advisory board. Jonas’ proposal, “Lab in a Patient: Microdevices for Next-Generation Precision Medicine,” was selected from 21 submissions for its novel approach to improving cancer treatments. 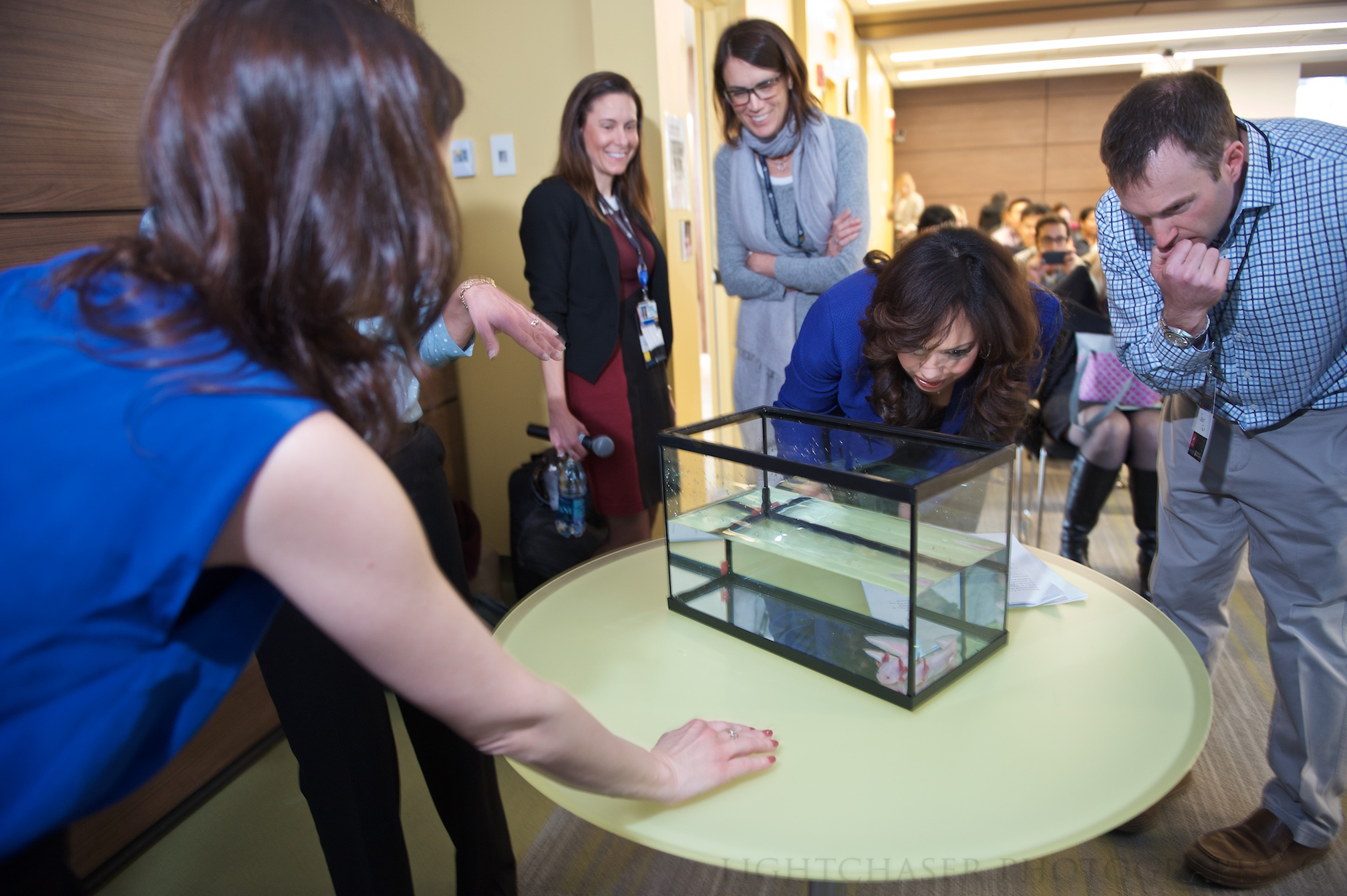 After a panel about regenerative medicine, attendees check out a salamander, which can regrow lost limbs, from Jessica Whited’s lab.

Jonas’ project centers on tiny devices, smaller than a grain of rice, that are implanted in a tumor. The devices can carry small doses of multiple anti-cancer therapies, directly depositing medication into different regions of the tumor to improve their effectiveness.

“The tissue is analyzed to measure the effect of each therapy on the tumor,” Jonas explained. “We hope that this can help us identify the optimal therapy for patients on a personalized basis.”

Jonas’ multidisciplinary research team, which includes staff from Radiology, Surgery and Surgical Oncology, is focusing on ovarian, lung and prostate cancers. Ultimately, he hopes the device can be used for many other types of cancer. The award will fund efforts to advance the technology and conduct clinical studies.

“There are clear synergies across the various clinical applications, and I feel very fortunate to bring all these amazing researchers and physicians together as one team,” Jonas said.

The BRI also awarded eight Research Excellence Awards, with a $1,000 prize going to each winner – selected from the pool of 80 poster presenters featured at Discover Brigham.