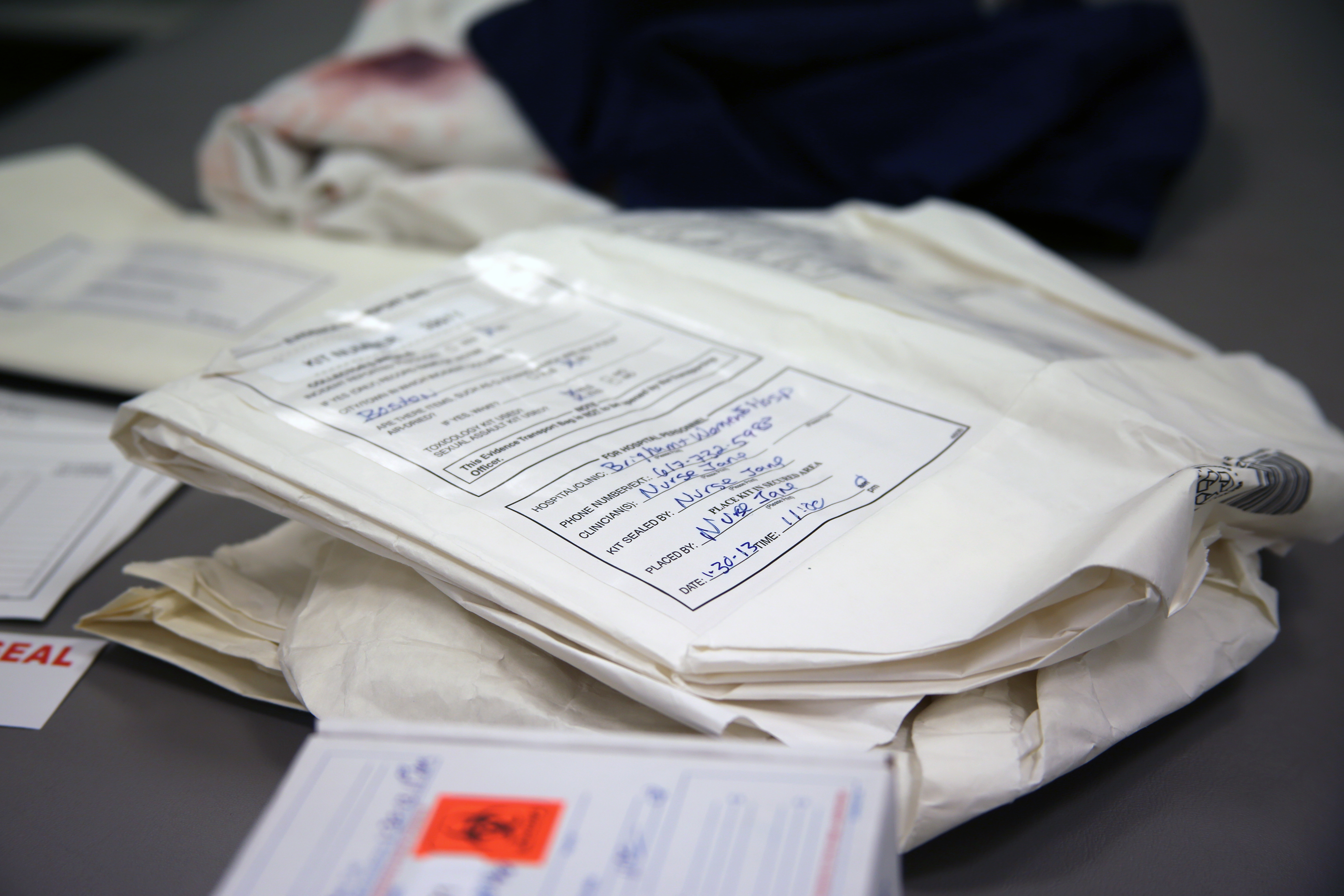 More than one-third of women and more than one-fourth of men in the U.S. experience rape, physical violence or stalking by an intimate partner during their lifetimes.

To help lessen the health consequences associated with violence, trauma and abuse, a group of BWHers developed a training program for care providers, the Sexual Assault Simulation Course for Healthcare Providers (SASH).

SASH, which is the first nurse-led simulation at BWH, allows providers to gain hands-on experience in a safe environment and understand their roles as members of an interprofessional sexual assault response team.

Meredith Scannell, RN, MPH, of the Department of Emergency Medicine and the Center for Clinical Investigation; Annie Lewis-O’Connor, PhD, NP-BC, MPH, FAAN, a nurse scientist and founder and director of the Coordinated Approach to Recovery and Empowerment (C.A.R.E.) Clinic at BWH; Amanda Berger, MSN, SANE-A, and Andrea MacDonald, BSN, both forensic liasons in Emergency Medicine; and Ashley Barash, a former medical simulation specialist at BWH, began offering the course at the Neil and Elise Wallace STRATUS Center for Medical Simulation in 2013.

Scannell identified a need to improve care for sexually assaulted patients who arrive in the Emergency Department (ED). Her first priority became developing an enhanced, comprehensive education for ED nurses. After seeking out the expertise of fellow forensic nurses and nurse scientists, Scannell and others ultimately developed SASH for nurses, physicians and physician assistants. The team received BWH’s Mary Fay Enrichment Award in 2012, which funded the course’s development.

The four-house course, offered to clinical teams working in the ED, focuses on the medical, psychological and forensic needs of patients who have been sexually assaulted. It is divided into four sections: didactic teaching, evidence-collection skills acquisition, simulation (with a standardized patient actor) and debriefing. Participants learn how to collect components of the sexual assault evidence collection kit, perform a forensic examination and provide effective care for patients who have experienced intentional violence.

The course uses a trauma-informed framework, which helps providers understand how a patient’s exposure to intentional violence and trauma may influence care.

“Historically, this patient population has experienced disproportionate gaps in the delivery of their care in emergency departments and once they leave,” Lewis-O’Connor said. “This kind of intentional violence – sexual assault, domestic violence or human trafficking – is a serious public health epidemic in the U.S. and worldwide.”

Scannell, Lewis-O’Connor and Barash published a paper on SASH in the Journal of Forensic Nursing, “Sexual Assault Simulation Course for Healthcare Providers: Enhancing Sexual Assault Education Using Simulation,” which received the journal’s Article of the Year award this fall and now serves as a blueprint for other institutions to follow.

“Our goal is for every ED nurse to go through SASH,” said Scannell. “Each year at BWH, we see about 60 to 70 patients treated for an acute sexual assault – meaning the assault occurred up to five days prior – in the Emergency Department. It’s critical at least one member of a care team, and hopefully more, is trained in a comprehensive, quality care approach for this particular patient population.”

In the future, Scannell and her colleagues hope to offer training to participants from other disciplines, such as social workers and pharmacists, who may interact with patients who have been sexually assaulted.

“I am so proud of the program we’ve created,” said Scannell, who credits the course’s success to the passionate support it received from clinical staff across the hospital. Those supporters include Dorothy Bradley RN, MSN, program director in BWH’s Center for Nursing Excellence; and Patti Dykes RN, PhD, MA, a senior nurse scientist in the Center for Nursing Excellence; Janet Gorman, RN, BWN, MM, nurse director for Emergency Medicine; Nancy Hickey, MS, RN, former associate chief nurse, who passed away last year; and Charles Pozner, MD, medical director at the STRATUS Center.

In addition to the gaps in care that SASH is addressing in the ED, Lewis-O’Connor’s C.A.R.E. Clinic provides post-ED support to men and women who have experienced intentional violence. Through a trauma-informed care model, the C.A.R.E. Clinic helps patients create an individualized plan of care that is based on their unique needs.

Lewis-O’Connor said she also appreciates the partnership between the C.A.R.E. Clinic and BWH clinicians such as Hanni Stoklosa, MD, MPH, an emergency physician in Emergency Medicine and an internationally recognized expert in human trafficking.

“Partnerships are so important to ensuring that patients who present with intentional violence in the ED receive the highest-quality and safest care possible, both while they are here and after they leave,” Lewis-O’Connor said. “My work is dependent on others. It’s all about collaboration and doing what’s best for the patient.”