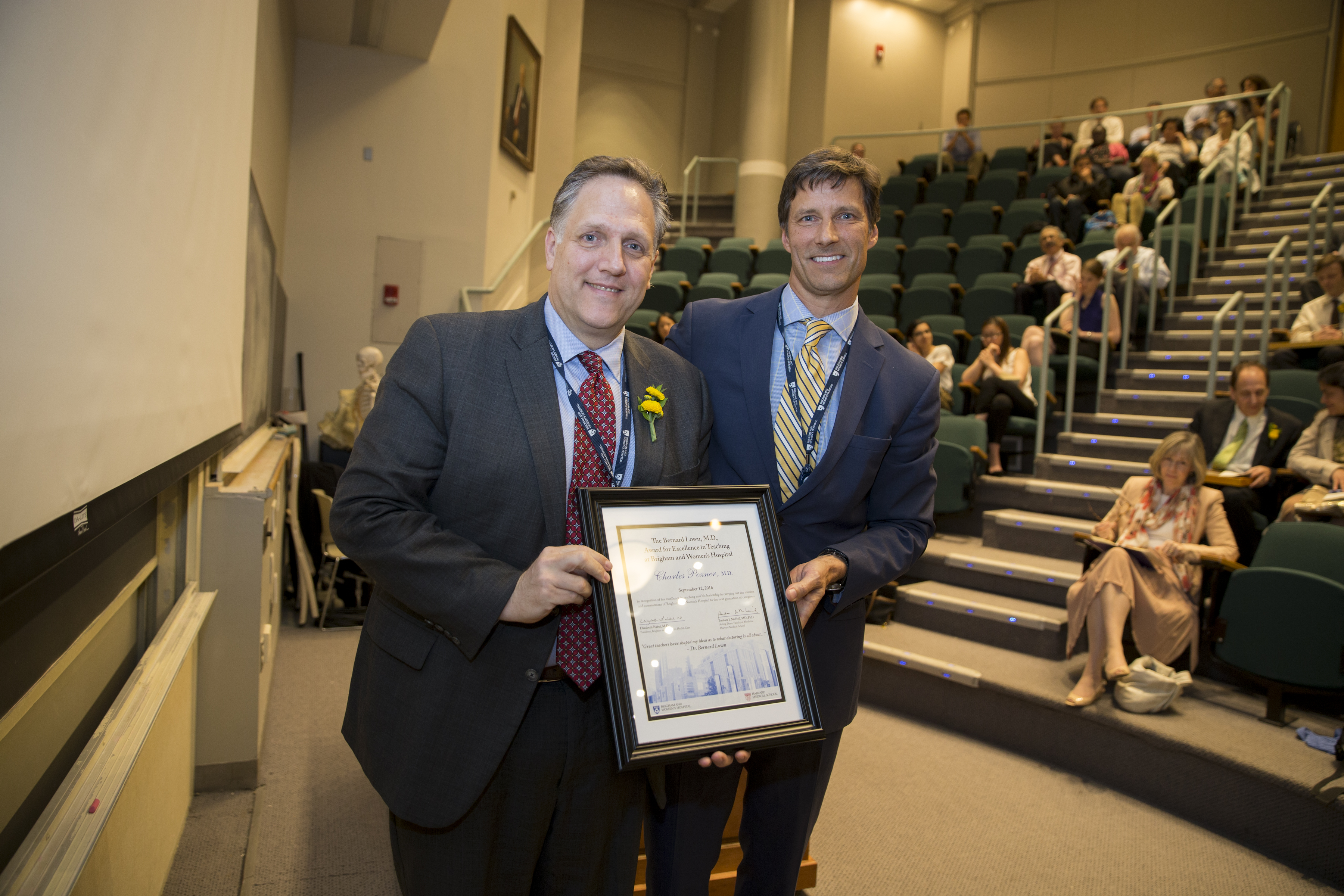 Praised as an innovator in medical education and for his warmth and sincerity as a mentor, Charles Pozner, MD, medical director of the Neil and Elise Wallace STRATUS Center for Medical Simulation at BWH, was honored with the Bernard Lown Teaching Award earlier this month.

Pozner led the development of the Simulation, Training, Research and Technology Utilization System (STRATUS) Center in 2004 as a single-specialty simulation center in the Department of Emergency Medicine. More than a decade later, it has grown into a multidisciplinary hub for hands-on training for thousands of physicians, nurses, physician assistants, residents, fellows, students and other clinicians across 14 departments throughout the hospital and beyond.

In addition to providing clinical training, STRATUS has also been used for assessment, process improvement and research purposes. More than 100 peer-reviewed studies have been published using data obtained in STRATUS; among those was the first simulation-based paper in the New England Journal of Medicine.

Through his work in the STRATUS Center and involvement in other projects, Pozner has redefined medical education at BWH, wrote Michael VanRooyen, MD, MPH, chair of Emergency Medicine, in a letter nominating Pozner for the award.

“I can honestly say that there are few clinicians whose contributions have affected as many learners, in as many disciplines and areas of clinical importance, as have the contributions of Dr. Pozner,” VanRooyen wrote. “His pioneering work has greatly improved the quality and safety of patient care in the entire hospital and beyond.”

The Lown Award was established in 2009 and named after Bernard Lown, MD, to celebrate physicians who are outstanding clinical leaders and recognize the significant role that education plays in BWH’s mission. Lown is a renowned senior physician at BWH, professor emeritus at Harvard School of Public Health and a Nobel Peace Prize recipient.

Pozner, named Clinical Innovator of the Year at BWH in 2008, said he was deeply moved to receive the award.

“The fact that I’ve been recognized as a teacher is so unbelievably rewarding,” he said. “I love the interaction involved in teaching, and I love learning with the students.”

“No one comes to work to make mistakes, but we’re human, and humans have flaws,” he said. “In this environment, mistakes don’t hurt anyone—we can always just reboot the computer—so you should feel comfortable making them here because we’re going to use the mistake as a means to improve your practice.”

The supportive atmosphere in STRATUS is emblematic of Pozner’s passion for teaching and exceptional mentorship, wrote Andrew Eyre, MD, of Emergency Medicine, in a nomination letter.

“I cannot think of a clinician more deserving of this award,” Eyre wrote. “While I and others have learned a huge amount of information from him directly, nearly every provider at Brigham and Women’s has had their education and practice enhanced indirectly by Chuck’s leadership of STRATUS.”