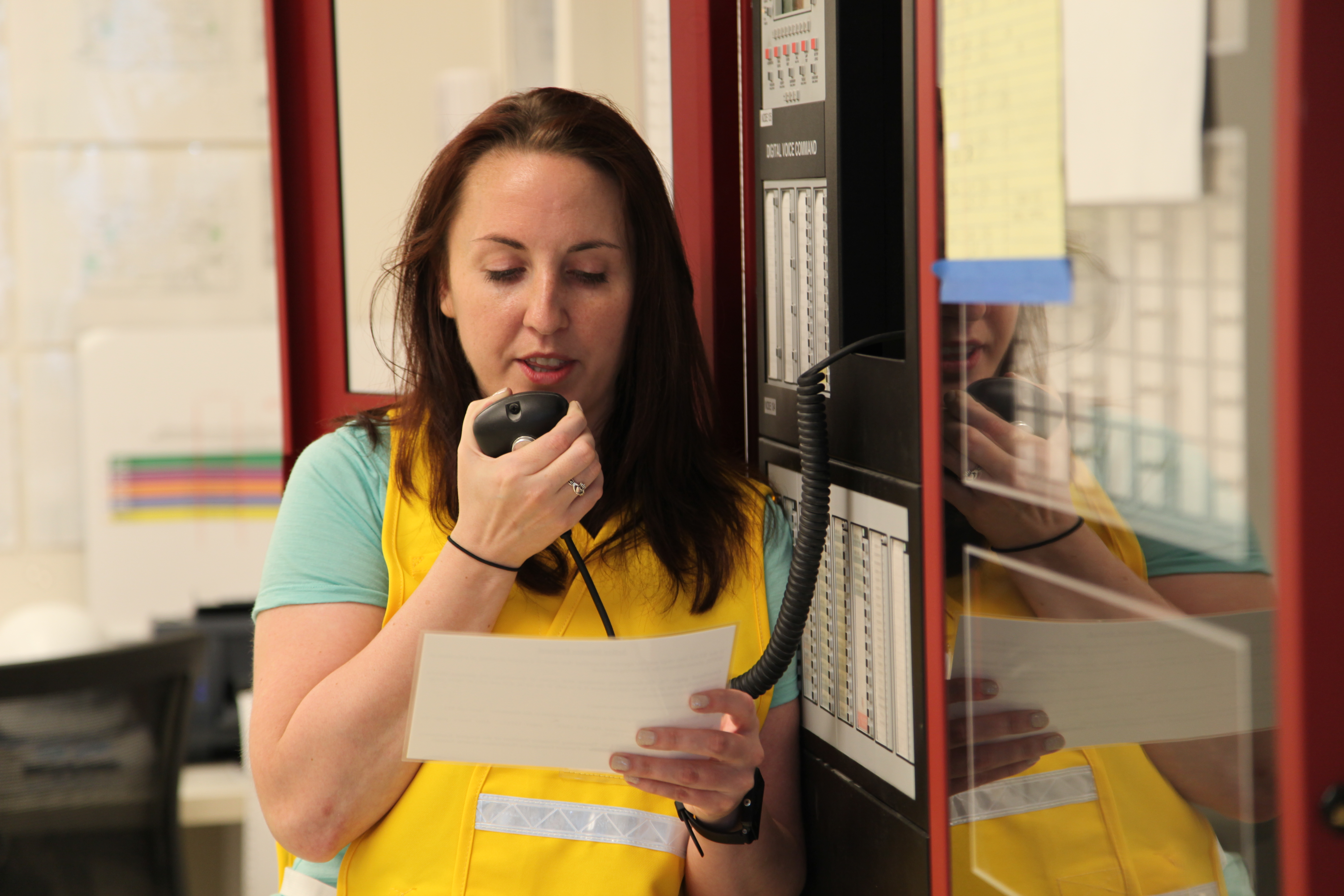 Ashley Brent, of BWH Telecommunications, reads a scripted announcement over the building’s loudspeaker.

To rehearse and evaluate the hospital’s response plan to a life-threatening situation, approximately 70 BWH staffers participated in an active shooter exercise in the new building, now named the Building for Transformative Medicine, at 60 Fenwood Road on Sept. 21.

Volunteer participants met on the third floor of the new building at 9 a.m. to review safety protocols. Several members of the Boston Police Department and Boston Emergency Medical Services also joined to simulate their response to an active shooter event. The exercise was confined to the second and third floors of the building, and all BWH participants wore colored vests indicating their role.

Organizers say the fact that the new building remained mostly empty—patients won’t be seen there until Oct. 3—allowed them to run the exercise without disrupting the hospital’s normal operations.

“This was an important opportunity for us to continue to improve our preparation, response and recovery in the rare event we are faced with an active shooter situation,” said Eric Goralnick, MD, MS, medical director of Emergency Preparedness at BWH. “Various members of our Brigham team who participated—ranging from nurses, physicians, social workers, Employee Assistance Program staff and administrators, along with Boston EMS and Boston Police—helped simulate a realistic environment, which provided a great learning experience for all involved.”

The exercise lasted about 20 minutes, beginning with an air horn sound to signal the first “gunshot.” No actual weapons, ammunitions or simunitions (also known as blanks) were used at any time.

Two role-player volunteers dialed the code line to notify an operator at BWH Operator Services, who was also part of the exercise, that a shooter was in the building. All communications during the exercise started and ended with role-players stating this was a drill.

Within minutes of the initial calls, a volunteer from BWH Operator Services announced over the building’s loudspeaker that there was a life-threatening situation in the building and all people should immediately move away, if it was safe to do so, or shelter in place. Shortly afterward, Boston Police moved into position to simulate their response—locating and apprehending the shooter, who was role-played by an actor. Once police deemed it safe for EMS to approach the scene, first responders identified and triaged victims, who were role-played by a mix of BWH staffers and mannequins.

Being able to practice and evaluate BWH’s active shooter plan in a real-world environment—including the opportunity for staff to simulate a run-or-hide response—will be invaluable to everyone who participated, said Robert Chicarello, director of BWH Security and Parking.

“This was a wonderful example of interagency collaboration between the Brigham, Boston Police and Boston EMS, as well as our volunteers and role-players,” Chicarello said. “Although our sincere hope is that this training never becomes necessary for anyone to use, being able to practice it makes us all safer. What our participants learned here can work anywhere.”

The event concluded with debriefings in the new building, where participants shared their reactions to the drill and identified potential areas for improvement.

“It was a great opportunity for our staff to practice running or hiding from a life-threatening situation,” said Michael Rourke, Emergency Preparedness program manager at BWH and BWFH. “Boston Police and EMS were also thankful for the opportunity to practice their response to an active shooter in an unfamiliar environment.”