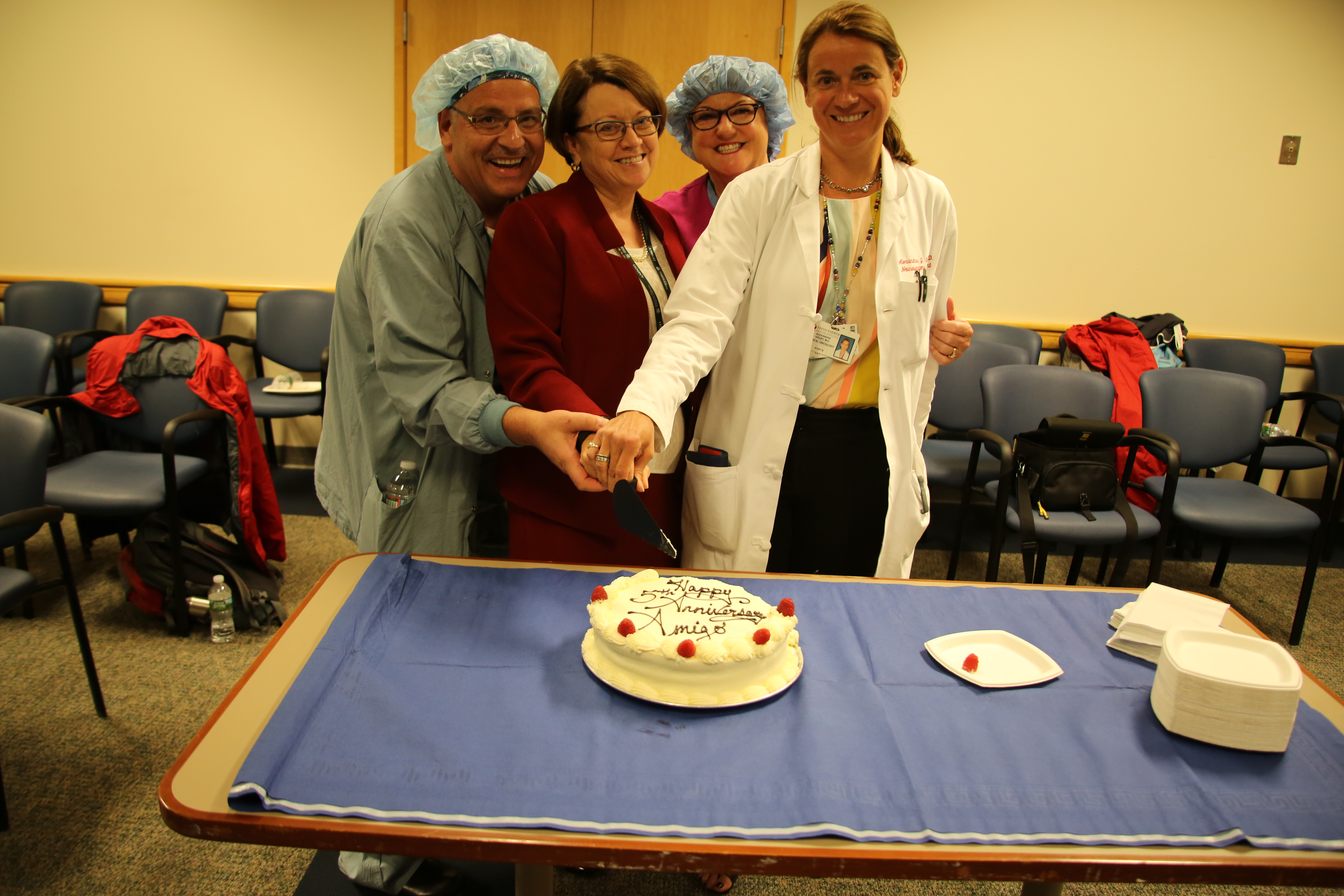 In the five years since the Advanced Multimodality Image Guided Operating (AMIGO) suite opened at BWH, more than 1,200 procedures have been performed there—a figure Clare Tempany, MD, medical director of AMIGO, says wouldn’t have been possible without BWH’s commitment to expanding the boundaries of medicine.

“We’ve seen amazing results in many fields of medicine and surgery within AMIGO,” she said. “We’re honored so many people have supported the suite, and we hope they continue to do so for years to come.”

A joint endeavor between BWH and the National Institutes of Health, the AMIGO suite spans 5,700 square feet of operating and imaging technologies. Multidisciplinary teams of specialists—including radiologists, surgeons, anesthesiologists, nurses, technologists, engineers and researchers—use its equipment and novel design to efficiently and precisely guide treatment before, during and after a procedure, without the patient or clinical team having to leave the operating room.

It is the first operating suite in the world to house a complete array of advanced imaging equipment and interventional surgical systems, along with advanced navigational technologies for use during procedures, enabling less-invasive, more-effective therapies.

Clinicians have used the AMIGO suite to perform surgeries and procedures in several areas, including Neurosurgery, Interventional Radiology, Endocrine Surgery, Radiation Oncology and Surgical Oncology. Case volume in AMIGO has continued to rise, with about 296 cases performed in 2015 and 385 projected for 2016.

Neurosurgeon Alexandra Golby, MD, AMIGO co-director and director of Image-Guided Neurosurgery, recalls performing the first procedure in the suite in 2011. Looking back, she’s proud of how AMIGO’s scope has expanded.

“Even before AMIGO launched, we had a vision to make it a multispecialty and multi-organ suite,” Golby said. “In AMIGO, patients have access to state-of-the-art, first-in-human approaches, and everything we do is built on that as the guiding principle: Perform the best possible interventions for patients, which are really personalized to their needs.”

Golby said this includes patients who come to AMIGO with particularly complex cases that other treatments were unable to resolve.

During a recent event celebrating AMIGO’s five-year anniversary, Tina Kapur, PhD, co-director of AMIGO and executive director of Image-Guided Therapy in the Department of Radiology, who also provides research oversight in AMIGO, said she was happy that AMIGO continues to be a vibrant place for research. Over the last two years, several papers about research performed in the suite have been published in peer-reviewed journals.

“To know that we have performed more than 1,200 procedures has been amazing,” Kapur said. “We have been able to survive and thrive, and now our mission is to plan for the next 1,200 cases.”

“Groundbreaking research in AMIGO has translated to treatment-changing approaches for breast MRIs, which potentially affects tens of thousands of women who undergo breast-conserving therapy,” Golshan said. “In addition, AMIGO has been instrumental in BWH receiving its first grant from the Breast Cancer Research Foundation.”

Since AMIGO opened, about 900 interventional radiology cases have been performed there, including tumor ablations—minimally invasive destruction of cancer tissue—and MR-guided biopsies, which are performed when cancer is visible in MRI images but cannot be confirmed by traditional biopsies. More than 200 Neurosurgery procedures have been performed, including brain tumor resections and deep brain stimulations, which treat various disabling neurological symptoms.

Looking forward, Kapur hopes teams in AMIGO will be able to partner even more closely with technology companies to help develop and test new devices, software and imaging. “We’re a unique test bed to do that because we have an unusual mix, where researchers and clinicians work closely every day,” she said.

During the event, speakers acknowledged the late Ferenc A. Jolesz, MD, who was the driving force behind AMIGO.

“Ferenc was like a second father to me,” said Golby. “He was a true visionary. I hope we can do him proud as we take our work into the next five years of image-guided therapy.”