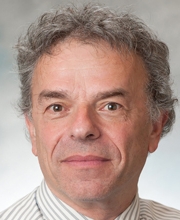 In a new study, scientists at BWH, the University of York and Leeds in the UK and MD Andersen Cancer Center in Texas found that radiologists with an average of about 20 years’ experience could identify abnormal mammograms about 75 percent of the time after just a half-second glimpse.

The aim of the study was two-fold: confirm the radiologists really could distinguish between normal and abnormal patients at above-chance levels after such a brief look at the images, and to try to discover the signs in the mammograms that alerted the radiologists that an abnormality was present.

“Radiologists tell us that they frequently have ‘hunches’ after a first glance at a mammogram. We found that these hunches are based on something real in the images. It’s really striking that, in the blink of an eye, an expert can pick up on something about that mammogram that indicates abnormality,” said Jeremy Wolfe, PhD, senior author of the study and director of the BWH Visual Attention Laboratory. “We were particularly interested to discover that they can also detect something abnormal in the other breast, the breast that does not contain a lesion.”

Of course, no one would suggest that radiologists should take just a half second to read a mammogram in a clinical setting, Wolfe added. But the discovery of some ability to judge abnormality after a glimpse could be important if it identifies a signal that was previously unknown. In clinical practice, a radiologist may use computer-aided detection (CAD) systems to help detect cancer. A new ‘gist’ signal might be used by computer scientists to improve the accuracy of these systems.