Energy efficiency and environmental sustainability have been cornerstones of the building’s design since its early stages, with numerous creative features contributing to its eco-friendly footprint, according to Steve Dempsey, BWH director of Planning and Construction. The building’s green design, construction and maintenance practices conform to the U.S. Green Building Council’s LEED Gold standards, making it the highest-rated LEED structure at the Brigham once certified.

One of the standout features of the new building is a subterranean cogeneration plant, built in Germany, enabling the hospital to produce its own heating, cooling and electricity for the first time. Cogeneration, sometimes referred to as combined heat and power, is an energy-efficient technique for producing electricity and heat simultaneously.

Powered by natural gas, the plant’s 16-cylinder engine will produce enough energy to meet 80 percent of the electricity demands of both the new building and the Shapiro building, Dempsey explained.  The dramatic cost savings associated with producing energy in-house will enable the hospital to recoup its investment in the plant’s infrastructure in a mere six years.

“We all have to find effective ways to reduce our operating costs, and the clever design of this state-of-the-art building is going to save the hospital a lot of money, which will help increase our margin,” Dempsey said.

Currently, the Brigham obtains most of its energy from the Medical Area Total Energy Plant, better known by its acronym MATEP, a private power plant serving the Longwood Medical Area. The cost of producing energy in the new cogeneration plant will be lower than MATEP’s rates, and having the physical plant in such close proximity allows BWH to get more bang for its buck, Dempsey said.

“When a utility company supplies power to you through its transmission wires, the electricity loses a bit of its ‘punch’ as the distance of that transmission increases,” he said. “By becoming a source for our own electricity, it allows us to have so much more energy efficiency.” 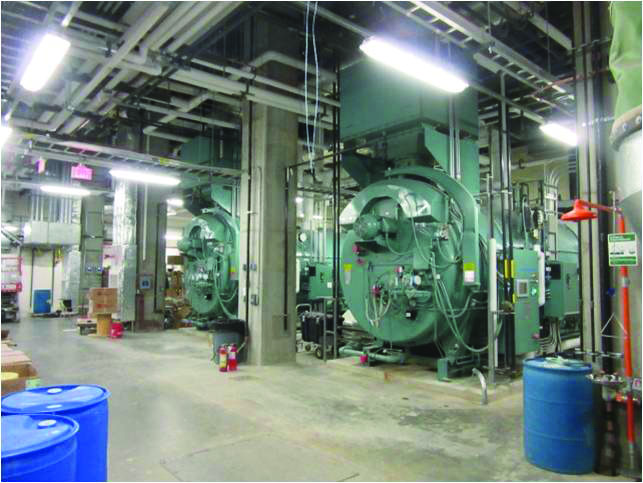 Boilers inside the cogeneration plant

The cogeneration plant is one of many green features at the new building. Other design elements to reduce energy consumption include extensive use of natural lighting, as well as sensors that only turn on the lights if a room is occupied. Innovative façade-shading devices—the green, yellow and gray paneling that run vertically along the building’s exterior—will help reduce glare and cooling costs. Meanwhile, green and white roof surfaces insulate the building from a heat-island effect common in urban areas.

Behind ceiling panels inside the building are chilled beams—metallic beams containing chilled water that cool a room when air passes over them. Water retains its cooling properties better than air does, Dempsey said, making the design far more efficient than traditional commercial ducted cooling. The beams are expected to reduce energy needs by 20 percent.

Water plays a starring role in other sustainability features in the building. A 40,000-gallon cistern will catch rainwater for reuse in mechanical systems. In addition, all large roof surfaces are blanketed with plants that can absorb rain, ultimately reducing runoff and the burden it puts on Boston’s wastewater treatment system.

“As we consider our future mid-campus redesign, cogeneration and all of these other techniques we’ve adopted in the new building will be revisited,” Dempsey said. “We’ve identified the path forward for us to make enormous savings in utilities and to create environments our staff is going to love.”